Mohammed Usman debuts in the UFC, Serghei Spivac continues his ascent, and Augusto Sakai heads for the door. 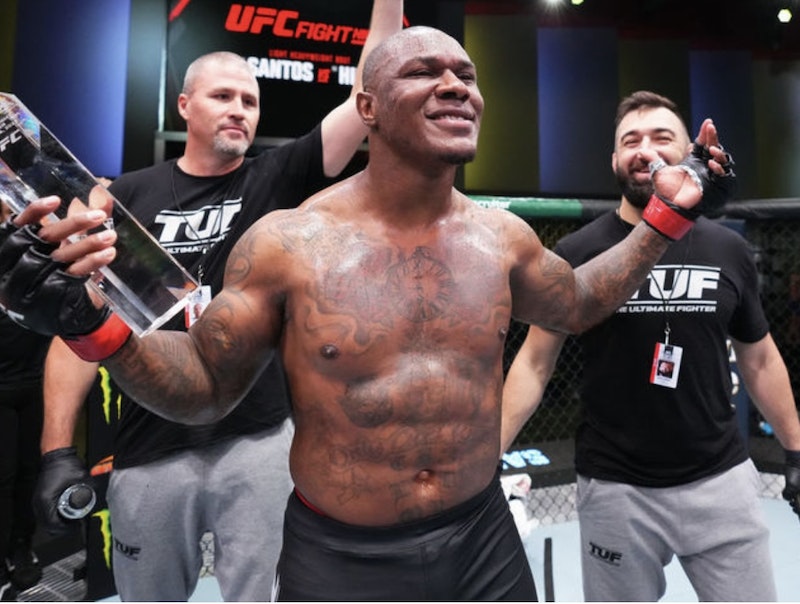 Heavyweight fortunes can—and do—change with a single punch. Whether they change for the better depends on the hands of the puncher and the chin of the punched. At UFC Fight Night: Santos vs. Hill, a jacked-up Mohammed Usman landed only 13 strikes, but one of them sufficed to end former NFL player Zac Pauga’s night and make Usman and his reigning welterweight champion brother Kamaru the only pair of siblings to each win a season of The Ultimate Fighter. Meanwhile, Serghei Spivac—who at 27 is six years younger than Usman yet has already been fighting in the UFC for three years—dispensed 86 strikes, most of them nasty ground-and-pound shots, en route to finishing portly striker Augusto Sakai on the ground.

Mohammed Usman didn’t impress me prior to this season of TUF. He was an undersized, grapple-heavy fighter who held his opponents against the cage, but wasn’t nearly as good at it as Kamaru. He debuted in the PFL to great fanfare in 2021, seemingly among the favorites to claim the prize, but was beaten to a pulp by heavyset Army veteran Brandon Sayles, who at 6’5” towered over Usman, who is listed at 6’2” yet appeared shorter than his brother during this latest post-fight interview.

To use a necessary, libel-proof euphemism, Mohammed clearly appears to be “on whatever Kamaru is using”—presumably steroids cycled in a manner surreptitious enough to defraud the USADA testers—and now has similar fast-twitch firepower in his hands. Zac Pauga, a chunky-yet-nimble natural athlete whose college football career far outstripped Usman’s, moved deftly around the ring, peppering the shorter fighter with sharp blows (33 strikes spread over the whole body to Usman’s 13 head shots), stuffing his one takedown attempt, and generally controlling the pace of the fight. I assumed (and hoped) Pauga was going to win, until one big punch right on the button ensured that he didn’t.

If Dana White has any sense, the 34-year-old Pauga will get another chance, because the man he kayoed in the previous fight—Jordan Heiderman—struck me as the real deal on the indies, a capable wrestler surely able to hold his own with the fat boys and bulked-up light heavyweights lining the lower ranks of the UFC’s top-heavy heavyweight division. In fact, with that in mind, I’d bring in both Pauga and Heiderman—who could deny them when undersized, overmatched Harry Hunsucker, who lost by knockout on Dana White’s Contender Series as well as in his two UFC fights (totaling roughly six minutes of cage time spread across three kayo defeats), will be competing at light heavyweight against the returning Tyson Pedro on the UFC 278 prelims?

As for Mohammed Usman, he now has the steel-forged body and hammer fists to accompany the big surname that’s really just his GOAT-adjacent brother’s surname. Will that be enough as he ascends the ranks? Probably, given that jelly-bellied ex-Philadelphia cop Chris Daukaus rode fast hands and lightning knockouts to the top of the division until Derrick Lewis and Curtis Blaydes combined to turn on his black lights and halt his ascent. He’s probably no match for the absolute giants and killers—Blaydes, Alexander Volkov, Ciryl Gane—but he can knock out the likes of Augusto Sakai.

Augusto Sakai, in fact, was on the receiving end of a TKO for the fourth straight time, which will perhaps be enough to justify the UFC parting ways with him. Aside from a flash kayo of Marcin Tybura at Tybura’s lowest ebb in 2019, the six-fight winning streak at the beginning of the formerly 400-pound Brazilian striker’s UFC career was suspect: the Andrei Arlovski and Blagoy Ivanov split decisions certainly should have gone the other way, but given how frequently those two have benefited from bad splits themselves, it’s understandable (though Ivanov really beat the crap out of him, for what it’s worth).

Spivac, meanwhile, has won five of his last six—his only loss came at the hands of the streaking Tom Aspinall—and is now 6-3 overall in the UFC. Along the way, he’s thrashed some big names: NFL All-Pro domestic abuser Greg Hardy, ageless Russian submission specialist Aleksei Oleinik, and potential title contender Tai Tuivasa, whom Spivac handled roughly the same way he handled fellow big boy Sakai; i.e., roughly, with lots of takedowns and ground and pound. Sakai, who was grounded and pounded by retired striker Alistair Overeem back in 2020, has shown non-existent wrestling defense during his time in the UFC (former sambo star Ivanov took him down and controlled him when they fought too, and he wasn’t even really trying). Against Spivac, who appeared more muscular than at any previous point in his career—his body transformation was almost as shocking as Mohammed Usman’s—Sakai was a wet pool noodle, soggy and offering scant resistance over the course of a beatdown that wasn’t close for even one-half of a split second.

Styles make fights, and Spivac’s style is clear: if he can ground you, as he did Sakai and Tuivasa, he’ll pound you. If he can’t submit you or beat you up, he’ll lay on you until he wins, as Oleinik learned. However, if you can bring the fight to him, he’s a step slow and will eat shots, as he did against Aspinall and fellow fast starter Walt Harris. But he’s young and getting stronger, so it’ll be harder to bring the fight to him when he’s bear-hugging you and backing you up against the cage. Other than Curtis Blaydes, who is also a relatively youthful 31, few heavyweights have proven so dedicated to grappling—it’s taxing, and most of these men, often fat or at least big, can only do so much.

Spivac isn’t ready for Blaydes yet, but he eventually will be, and there are few other heavyweights in the Top 10 who would seem to present a challenge. Alexander Volkov? He’ll take him down and beat him up, as Blaydes did, or submit him, as Apinall did. Sergei Pavlovich? He’s a power puncher with a long reach, but is he committed enough to his combat sambo base to withstand Spivac? Derrick Lewis and Chris Daukaus have punchers’ chances, I suppose, but the latter’s too old and the former too weak to offer much of a threat. A rematch against Marcin Tybura would be interesting, given that the well-rounded Tybura won their first fight, as would a match against fast-rising fellow Moldovan wrestler Alexander Romanov, whose name has been linked previously with Spivac’s.

Will either Usman or Spivac become a UFC champion? It’s always fun to think about this when watching these matches: am I present at the start of something great, perhaps even the dawn of a new era? Such beautiful dreams are always a fight away from ending, and usually do end in the blink of an eye, before the loser can see it coming and with so much left undone. Isn’t that just like life? “I could’ve been a contender… I could've been somebody instead of a bum, which is what I am,” Marlon Brando’s Terry Malloy tells us. But On the Waterfrontscreenwriter Budd Schulberg, himself a keen observer of the fight game, knew better: everybody is somebody, even the bums, and those bums are often the most compelling somebodies of all.