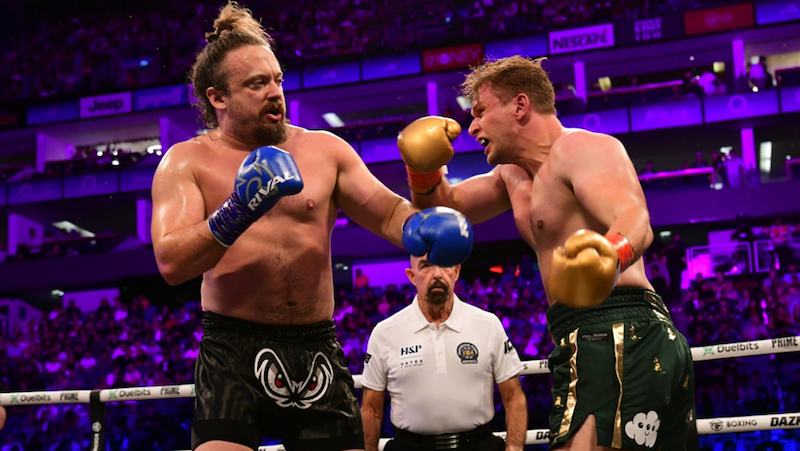 Few things can compete with a good heavyweight slugfest, particularly those Butterbean-style toughman affairs in which two largely untrained big boys trade winging shots until one or the other drops. Last Saturday’s DAZN X Series 001 featured precisely one bout of this sort, with the 6’5”, 261-pound comedian Sam Hyde—canceled since the very first days of the Trump Era, the rising of the Orange Sun around which the hot take planets, desperate for warmth, came to revolve—pitted against the 6’1”, 255-pound Instagram “tits and ass” violinist Jake “iamthmpsn” Thompson.

If this sounds like a risible premise, it is. But I can’t get enough of it. An acquaintance and I incessantly discuss celebrity boxing and boxing archetypes, speculating about hypothetical showdowns between the likes of Chris Evans and Larry the Cable Guy. I’ve loved this silly stuff since I first watched William “Refrigerator” Perry, Manute Bol, Jose Canseco, and Danny Bonaduce disgrace themselves by deigning to throw hands in exchange for a few gold doubloons. The caliber of this sort of performance has improved in recent years, though, driven by the Paul brothers—legitimate multi-sport high school athletes—turning above-average skills and admirable dedication to the craft into a multi-million dollar opportunity to embarrass other content creators, retired MMA fighters, and other tomato cans yearning for quick paydays.

Hyde and iamthmpsn was a fight that held considerable promise. Both men were big, each a legitimate heavyweight, and solidly-built—a sharp contrast to the fat boys and jelly bellies dotting the lower and middle ranks of boxing and MMA. If you put either in the ring with, say, former UFC heavyweight Roque Martinez, a surprisingly nimble striker with good footwork who nevertheless resembles an actual “tub of guts” and other assorted viscera, Roque would destroy them, but few viewers at home would predict that. In fact, the 37-year-old Hyde, who’s come a long way from both his McLovin-esque high school phase and his later run as a chubby-cheeked Adult Swim sketch comedian, now resembles a slightly taller, longer-limbed Marcin Tybura.

Hyde, with four inches of height and five inches of reach on his opponent, entered as the clear betting favorite. He’d trained the towering Epic Meal Time vlogger Harley Morenstein for his successful bout against plump, schlubby Game Grumps creator Arin “Egoraptor” Hanson at YouTuber iDubbz’s May 2022 Creator Clash. There, Morenstein implemented the game plan as Hyde had taught him: forget about footwork, forget about head movement, forget about finesse and instead focus on absorbing punches on the arms and the top of the head while waiting to brawl inside and brutalize the opponent with heavy hands.

This was the same strategy Hyde sought to employ against iamthmpsn, but the violinist kept Hyde at bay by pressuring him early. Neither man was a model of grace or beauty, but iamthmpsn weathered a very quick initial storm from Hyde and countered with some big, sweeping hooks, which Hyde—contrary to his much-vaunted strategy—ate like a bento-boxed lunch right on the ear. If Hyde was hurt, he didn’t register it, though apprehension about the looping punches kept Hyde honest for the remainder of the first round.

For people who’ve never wrestled, boxed, or grappled, these short rounds seem like nothing—how, for example, can three minutes in the ring possibly be as taxing as it looks? I can assure you they are. I wrestled throughout my youth and adolescence, and when I’ve had to restrain obese “consumers” in the group home or truculent neighbors on the street, those skills proved handy—but I was gassed in each later instance. If you’re not constantly conditioning yourself through hours of this work, continuous sparring in the style of eccentric UFC middleweight Sean Strickland, those three minutes of lactic acid build-up will strike you as anything but heavenly. Hyde and iamthmpsn were fatigued; both were breathing through their mouths two minutes into the fight. By the second round, iamthmpsn was taking steps back and even resting his hands on his thighs, something rarely seen in professional boxing or MMA outside of oddball encounters like the UFC 278 tilt between now-retired Luke Rockhold and Paulo Costa—a fight that was taking place at elevation in Salt Lake City, mind you, not sea level like this London event.

By the close of the second round, Hyde’s power was beginning to tell the tale. Unlike iamthmpsn, who relied almost exclusively on hooks, Hyde threw some primitive jabs—and they were getting through iamthmpsn’s guard. Hyde’s training footage with Morenstein demonstrated that this was his preferred method of attack—“he rips your guard down like an Uruk-hai,” the food vlogger had noted—and it allowed him to start touching and then hurting iamthmpsn. In the third round, iamthmpsn’s hooks died on Hyde’s arms even as Hyde began landing jabs and straights that dazed iamthmpsn. The hardest of these shots led to a pair of standing eight protection counts, the second of which resulted in the referee waving off the fight and awarding the victory to Hyde. To iamthmpsn’s credit, he never so much as took a knee, though he was nearly out on his feet.

During the post-fight interview, Hyde called out the extremely popular leftist streamer Hasan Piker. The fight seems like smart business for Hyde if it’s accepted, fast-tracking his rise back into the mainstream—people who wouldn’t have mentioned his name in 2017 during his “Hatreon” days were now openly praising his victory on Twitter—and amounting to an easier fight than the one he’d just lumbered through. At 6’3”, Piker is a hair taller than iamthmpsn, but a recent image of the lanky streamer holding a kettlebell in the starting position of a swing inspires little confidence. The man who became rich and famous for selling anti-capitalism to others is lean in a pretty-boy sort of way, but Hyde has endured hard shots from the much larger Harley Morenstein and iamthmpsn without batting an eyelash.

In his final-boss form, the middle-aged Hyde is an inelegant boxer who has at last matured into an asymmetrical, pock-marked face and big, bloated body that exhibits the “positive libido for the ugly” capable of complementing his grating, unpleasant voice. The fight with Piker, should they agree to have one, would be a clash of shadow and light that Hyde—no stranger to mocking such manga-style action tropes in his comedic work—would relish. After all, it’s through careful design that one the greatest trolls of the past decade now physically resembles one, too.