Reflections on a fight, and a life, that happened lifetimes ago. 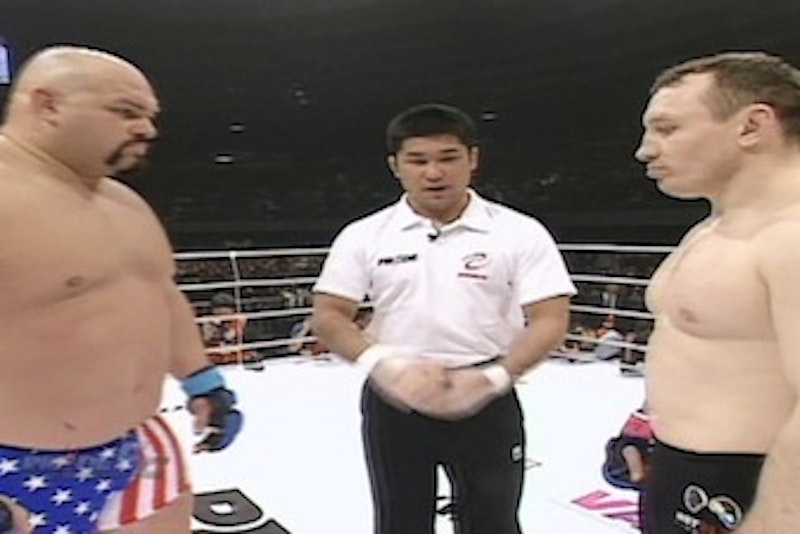 One of the great fights of my time, though not necessarily all time, witnessed 300-pound Division III college wrestling champion Dan Bobish losing a vicious brawl against ferocious 5’7” Russian kickboxer Igor Vovchanchyn. And by “my time” I mean circa-2004, a period when the wave of comic book movies hadn’t washed over us and the specific male nerddoms, including that of the “fight nerds,” remained tucked away in their own forum-specific fiefs.

Which was fine. I didn’t frequent those forums because I didn’t want companionship or socialization, something that social media today forces upon me because it provides a marginal benefit in terms of selling writing to Millennial media outlets. No, I sought out PRIDE and Pancrase footage because it was something else to watch, something to consume entirely on my own, and there wasn’t yet any YouTube to sort and categorize this entire library of copyright-busting content. Like any other lonesome information collector, I earned this trivial data the hard way.

I suppose everything that exists right now was just coming into being in 2004, which sounds meaningless because isn’t everything doing that at any point in human history? Yet the early 2000s were different, a sort of gateway or liminal stage before today’s professionalization, despoliation, and subsequent unraveling of anything we knew before, a time when “all that is solid melts into air.” The fight itself is one small, precocious artifact of this time, with the mammoth Bobish showing some grappling know-how and Vovchanchyn displaying elite-level striking. Vovchanchyn was legit, Gary Goodridge told me a few months ago—one of the few people who hit harder than the “Big Daddy”—but his reach was limited and his takedown and submission defense wasn’t nearly as advanced as we see even low-level fighters deploy in today’s mixed martial arts world.

Bobish stood out because he fought in front of Japanese crowds while wearing these tight USA flag spandex shorts, much like Tom Selleck lookalike Don “The Predator” Frye, and also because he was probably the heaviest halfway fit man to ever set foot in an MMA ring this side of Bob Sapp. He’d advanced wrestling skills and okay punching skills, and by the time this fight happened, he’d already held his own in a UFC heavyweight final against the slimmer but equally juiced-up college wrestling star Mark Kerr. Bobish was something to look at, and he had a long fighting career, but he was also a definitive 2004 cultural product: too rough and unpolished to be acceptable to a mass audience, too amateurish (in retrospect) to be regarded as any good.

The same went for Vovchanchyn. He fought plenty of guys who are still hanging around today, like the brain-battered Mirko Cro Cop, and either whipped their tails or, more likely, went down swinging those stubby arms and heavy hands of his in noble defeat. He was the second fighter to lay a loss (later changed to a no-contest due to the use of illegal strkies) on the seemingly unbeatable Mark Kerr, who had been slumping due to the drug addiction depicted in the excellent The Smashing Machine documentary, and he more than held his own against competent fighters such as Heath Herring and Quinton Jackson.

Vovchanchyn-Bobish is a wonderful slugfest, with the big, smoothly-shaved Bobish controlling Vovchanchyn with fast double-leg takedowns and the resulting “lay and pray” in the first round, and Vovchanchyn turning the tables when Bobish, wearied after 10 minutes of action, came out of the gate in the second wobbly, winded, and flat-footed and allowed himself to be punched into oblivion. That was always Bobish’s problem, the betrayal of his giant and muscular body. He looked like so many classic “juicers” from that era, massive but visibly unhealthy, hidden behind a meat suit that impeded normal breathing. In Bobish’s case, lacking the knockout power of a trained striker, he had to rely on quick takedowns and highly un-technical submissions that he more or less forced on a weaker opponent, such as the simple keylocks and guillotine chokes with which he ended many fights.

The fight is barely a footnote, and true combat sports connoisseurs wouldn’t dream of recommending it. But it was the type of fight I could watch, fresh out of eight years of participation in USA Wrestling programming, and think that I might be able to do something like it. After all, I’d competed in Greco-Roman tournaments, and UFC champion Randy Couture had competed in the same, so couldn’t I come out of nowhere and become a fighter instead of the nobody I was? I lived in Montana back then, a place so isolated and backward that I invariably felt accomplished and superior despite having few accomplishments of my own to justify such feelings of superiority. I won a state Greco-Roman wrestling event in 2003 at the age of 21, out-pointing a bunch of out-of-shape 97-kilogram teenagers and thirtysomethings, and believed that I was destined for the “big time,” whatever that meant. I did likewise in a Flathead County bodybuilding event featuring 19 woefully under-developed competitors, none in my specific class, and the resulting overall victory left me feeling as if I’d broken the world record in the 100-meter dash at the Olympics.

But none of that happened, because how could it have happened? It didn’t even really happen for Bobish and Vovchanchyn, who are long gone now, and it surely wasn’t in the cards for me. I harbored this bizarre faith that I could do all these spectacular things with no networks and no connections and no regimented training, that I could become someone of considerable standing by force of will alone. And I would do this merely by registering for disconnected sporting events I found on the Internet, even as I remained distant from the communities that comprised them.

Nowadays I work a lot, and the same work ethic that powered that nonsense, which is probably the same stupid and misguided work ethic that made Dan Bobish and Igor Vovchanchyn think it was a good idea to train like animals in order to fight each other, allows me to run out the clock on life itself. Running out the clock wasn’t something Bobish could do, because Bobish was too out of shape to go the distance. But not me, oh no. I have miles to go before I sleep, and this jungle of hot takes and cold takes is dark and deep. I’m older than other professional writers and younger than some, yet professional writers both old and young peddle scores of disingenuous ideas in order to keep the lights on, ostensibly for no better reason than “it beats working.”

How strange, because for me there’s no way to avoid work, much less “beat” it. This cold take of an essay is work, the physical work I described doing a decade ago in this essay was work… it’s all labor. It’s my life’s work, which consists of working. I “do the work,” as kids say whenever they’re referring to reading some brain-dead essay that supposedly explains everything that matters right now (e.g., daddies, absolute units, “an heroes,” and goodness knows what else). I balance this loathsome capitalist work-discipline, deeply ingrained in me by two sets of misguided immigrant grandparents, alongside my car salesman father’s obsession with total candor, which prevents me from pursuing a hustle or grift that will lead to a period of plenty when I needn’t work, when I might be able to “take ‘er easy” and “just rest.”

So when Bobish and Vovchanchyn fought in 2004 and I watched it, and just now when I watched it again… that was work, the work of criticism. And there’s no end to this work for me, no literary pot of gold at the end of the rainbow bridge. Nor was it an end to the work of Bobish and Vovchanchyn, who both took fights longer than they should’ve and thus failed to “quit while you’re on top,” a mythical concept that means nothing because where exactly do you go after you quit? To the peace of the grave? Friends, the cold takes must go on, the cause of writing something that isn’t utter tommyrot will endure, and this waking nightmare we call “the marketplace of ideas” shall never die.