When it comes to baseball, the old man ought to heed his son’s wisdom. 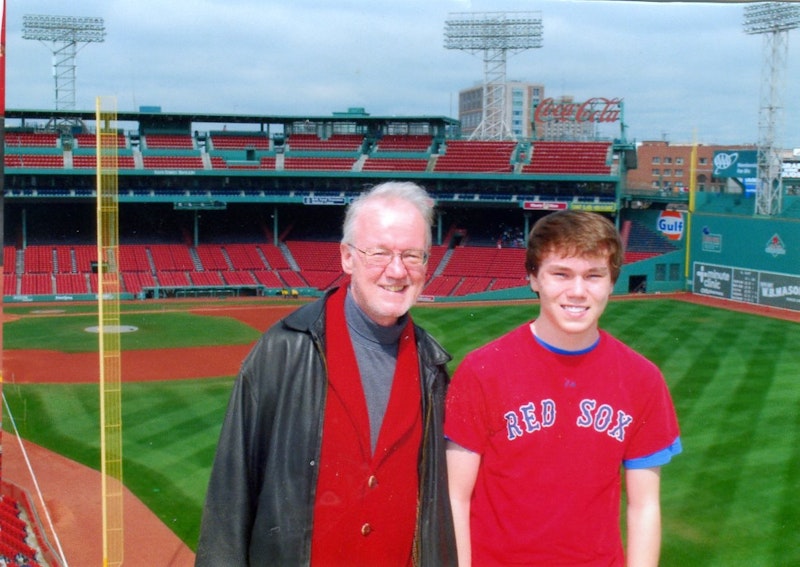 The picture below of my son Booker and me was taken in 2011—we’d gone to Fenway Park for a road trip and on a tour hours before the Sox/Cubs game, paid $20 or so for a series of snapshots—but it spells out the Red Sox’s 2022 season. Deserted. As in, after Boston plays the Rays on October 5th (presumably another loss) the stadium will go dark until next spring. Mercifully. As I wrote several weeks ago, as long as the Yankees don’t win the World Series, I can stomach a lost Sox season. No team makes the playoffs every year; and aside from the Yanks caveat (if they’re taken out, I can relax), I don’t really care who wins, although I’ll watch some of the games. Right now, at the very start of September, an Orioles/Mets re-match of the 1969 World Series sounds good to me. The O’s, out of nowhere, jumped their rebuild plans, are in contention for a wild card slot, and have become one of the “stories” of this season. Unlike the Red Sox, whose entire organization is, from this vantage point, a mess (and if one-handed maestro Chaim Bloom, who had such promise, is canned on October 6th, I’ll have more optimism for next year, and also win a bet with Booker; on Monday, Bloom received a “vote of confidence” from Sox president Sam Kennedy, which doesn’t mean much), Baltimore’s GM Mike Elias has constructed a squad that will compete at least for the next five years. (Unless franchise owners the Angelos family interfere.)

I’m going through the motions now, still watching—at least for several innings—each Sox game, but it’s mostly to see rookies like Bryan Bello and Kutter Crawford. As noted in this space many times, I don’t care for NESN’s bland broadcaster Dave O’Brien, who tries but fails to crack a joke when the team’s on the way to another loss. But as I saw the Twins take advantage of about 40 walks by Sox pitchers to win on Monday night, I had some (mild) sympathy for O’Brien. He’s no pauper, and, at 59 has a long resume in the business, but it must be strange for him (and his colleagues working for other teams) to sit alongside former MLB players who do the “color” for a game, and listen to their stories about their time in the big leagues. I’ve no idea how much “iron” the great Dennis Eckersley gets for his appearances with O’Brien (and it sucks that he’s retiring after this season) but he’s made his share of dough over the years. O’Brien is reportedly paid around $96,000 by NESN, kind of skimpy, and although he’s too experienced to be considered a “jock sniffer,” it must burn him on some level that he sits in the booth with guys who won World Championships and didn’t just talk about them on the air. A long time ago, before free agency (when most MLB players worked during the off-season), I’d guess that broadcasters and sports reporters made around the same salary as the majority of those they talked about and interviewed, but that rough parity disappeared for good around 1979. One other gripe: I don’t like it when players from opposing teams fraternize with each other when they meet up at, say, second base. The late Jerry Remy and Don Drysdale would be disgusted.

Anyway, Booker turned 28 last week and although he’s not a big “birthday person,” it’s still an occasion to mark. Like his older brother Nicky, he has little patience for the reminiscences of my wife Melissa and me, going over once again the details of when they were born, but as parents we like the stories. That morning in 1994, August 25th (the same of my mother’s birth in 1917, just for some who knows? reincarnation jazz), Melissa couldn’t feel the baby kick, and I insisted we get a cab to New York Hospital on the double; she was blasé, not worried, and didn’t even pack a bag, but upon arrival the doctor ordered an immediate c-section. All went well, and, after notifying my brothers, I called Michael Gentile at our New York Press offices to deliver the news, and asked him to reserve a celebratory table at Tribeca’s now-vanished El Teddy’s for that evening. Our newborn’s name was cribbed from Booker T. Jones (just as Nicky’s middle name Otis is after the legendary singer), and we thought, and still do, it was pretty good, although one of my co-workers said between rounds of margaritas, “Creative, especially with the surname Smith, but man, when grade school rolls around he’s in for some serious “Booger” jokes. I hadn’t thought of that, and it wasn’t until years later that Booker (who loves his name) confirmed that he was teased in that unimaginative manner. He survived.

When kids get older it’s sometimes startling when they shatter parental memories. For example, I’d always thought Booker really enjoyed his five years of Little League (and was really bummed missing his one championship game in 2006 since I was in Mumbai) but that wasn’t the case. I went to almost every game, vigorously cheered him on, didn’t yell at the umpires, sat with the other dads and moms and on the sidelines and guess I had a better time than him. “Dad, it was okay, but the best part was the sodas and hot dogs after the games,” he told me years later. Christ: as a father or mother, if you’re civilized, you do your best with the progeny, teach them manners, encourage reading and a smart attitude about pot smoking and other inevitable illicit behavior, and eventually they’ve forged independent lives and if it all works out, you’re on good terms.

That’s the case with Booker and Nicky, two smart fellows who are not only very close to one another, but their parents as well. I also learned some years ago, as opposed to the Little League memories, that as a middle-schooler fully versed in the history of rock ‘n’ roll (Donovan was his first favorite, when he was around seven) Booker scored points with friends. I’d never given it a thought when he was young; he’d hang out with me, listen to what I was playing, got classic CDs and vinyl for Christmas, all of which I though was pretty normal. So maybe that evens out the ledger; at least on baseball and music, two major sources of pleasure for us both. (Booker’s a serious Sox fan, grew up on sabermetrics—not from me—plays in a fantasy league with co-workers every year, and we can gab about baseball for half an hour every other day.) I won’t go excessively Wordsworth on you, but there’s some truth in his most famous line.