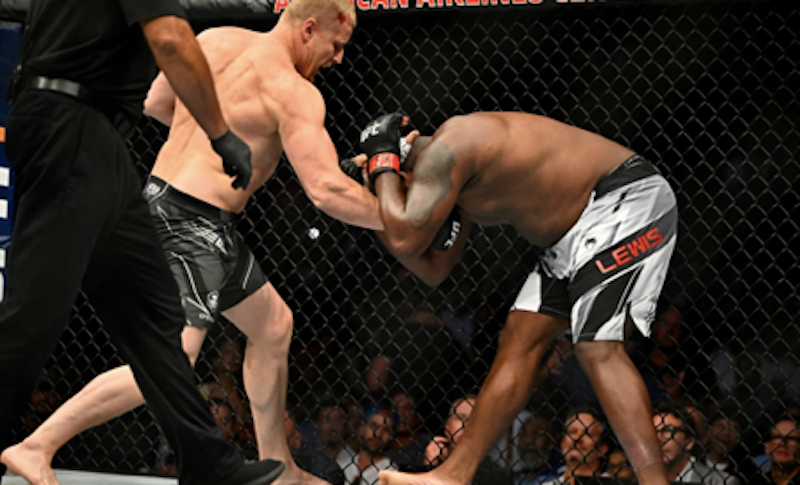 UFC 277 featured two heavyweight bouts—the tilts that really matter to me—along with a lot of everything else, which I don’t mind as long as there are exciting finishes. And there were finishes galore up and down the main card. Future light heavyweight champion Magomed Ankalaev announced he’s here to stay with a thorough thrashing of redoubtable Anthony “Lionheart” Smith. Versatile Brandon Moreno jazzed up the dismal, pillow-fisted flyweight division by kicking out the lights of Kai Kara-France, a highly technical striker, to take a 2-0 lead in their budding rivalry and seize the weight class’ interim championship in advance of a seemingly implausible fourth fight against Deiveson Figueirido (who will hopefully miss weight, as he has previously, so they have to do it a fifth time). Amanda Nunes didn’t finish Julianna Peña in the course of reclaiming the women’s bantamweight title, but she badly wounded the stubborn and courageous Peña, inflicting a deep gash on her forehead in a crimson-stained encounter you don’t often see on the women’s side of the ledger.

UFC 277’s pair of heavyweight bouts, though, were the straight tea, sis. But I ask: when are they not? It’s big meaty men slapping meat and about that little else needs to be said, though if I’m to fill precious column inches, I must surely do so.

On the prelims, 6’2”, 265-pound Hamdy El-Said Abdelwahab—a member of the 2016 Egyptian Olympic team, where he placed 10th in the Men’s Greco-Roman 98 kilograms competition—won a split decision victory over 6’6”, 255-pound Don’Tale Mayes. Mayes, a heavy hitter with a judo background that has availed him naught over the course of a UFC career in which he has proven vulnerable to takedowns and submissions, showed up in the best shape of his career—the rare heavyweight with visible abdominal muscles, a feat somehow duplicated by the stouter Abdelwahab, albeit over a fleshy, protruding gut.

Judging from a 5-0 record built on wins against a slate of opponents with losing records, including two separate knockouts of 0-2 Matthew Strickland, I expected Abdelwahab to take one on the chin against Mayes. He’d accepted the fight on a mere 12 days’ notice, after all, and what footage of him I could find reminded me of the talented Iranian heavyweight Greco-Roman wrestler Amir Aliakbari. Aliakbari, who turned to MMA after receiving a lifetime ban for the egregious performance-enhancing drug use that caused him to miss the 2012 Olympics, quickly racked up a 5-0 record in Rizin on the strength of the usual beatdowns of has-beens and tomato cans (as well as a questionable split decision win over current Bellator heavyweight contender and FedorTeam member Valentin Moldavsky) before aging, juiced-up Mirko Cro Cop turned on his black lights in the finals of the 2016 Rizin World Grand-Prix. Aliakbari, like Abdelwahab, was densely built and strong, but couldn’t throw or take a punch to save his life.

Against Mayes, Abdelwahab proved me wrong—he went winging punch for winging punch with the taller striker in the first round while mixing in precise takedowns, survived some hard shots from Mayes in round two that could’ve felled Terrible Ted the wrestling bear, and then rebounded in the third round to ground and pound his way to a split decision victory that by all rights should’ve been a unanimous 29-28 affair. Mayes, to his discredit, still showed no ability to defend against halfway competent wrestling, much less Abdelwahab’s smooth back trips and intense shoulder pressure. Even the likes of Rodrigo Nascimento and Ciryl Gane, neither of whom is a mat wizard, had their way with Mayes on the ground.

Here were two careers at the crossroads: Abdelwahad, the first Egyptian UFC fighter and thus ipso facto the greatest of all time from that country, is on his way to stiffer tests, while Mayes will probably get one last chance to justify his spot on the roster. Mayes remains a gifted if frustrating fighter and ought to be given a confidence-building match against a short, tubby brawler like Roque Martinez, whom he handled easily.

Speaking of careers at the crossroads, the main card showcased 37-year-old Derrick Lewis, the heavyweight division’s all-time knockout king, against 30-year-old Sergei Pavlovich, a 16-1 prospect who will forever be associated withthe easy ground-and-pound knockout Alistair Overeem scored during their 2018 encounter. Once again, I picked wrong, assuming that Pavlovich’s suspect chin—like the similarly chinless and knockout-prone Mirko Cro Cop, he barely has one attached to his face—would spell his undoing against Lewis, who has earned his keep for the better part of a decade by plucking exactly this sort of low-hanging fruit.

Instead, Pavlovich—another next-generation heavyweight who keeps himself in good physical shape and is gifted with a reach in excess of 80”—riddled Lewis with punches, scoring 20 or so significant strikes in the time it took “the Black Beast” to land four, in the process earning a quick stoppage that added the veteran’s scalp to an impressive list that already includes Shamil Abdurakhimov, Marcelo Golm, Kirill Sidelnikov, and Mikhail Moknatkin. Pavlovich isn’t yet a title contender, but with British prospect Tom Aspinall hurt and the loser of the upcoming Tai Tuivasa-Ciryl Gane match likely to drop in the rankings, he’s not far away. Pairing him with Curtis Blaydes later in the year would make sense, as the skilled wrestler was denied a statement win against Aspinall and probably needs a real test before his own title shot. If Pavlovich’s wrestling defense isn’t any better than it was when Overeem bludgeoned him from the top position, he’ll likely meet the same fate against Blaydes as countryman Alexander Volkov—taken down and picked apart en route to a decision loss.

The stoppage was fast, but no faster than Derrick Lewis’ fall from the top. Lewis has gone 2-3 since 2021, stopping Blaydes and then-rising star Chris Daukaus with knockouts but getting stopped by Gane, Tuivasa, and now Pavlovich. In the Blaydes and Daukaus fights, Lewis won the way he always does, gambling that a properly-timed big punch could stop his careless foe. In his three losses, he appeared slow and flat-footed, even compared to Tuivasa, whom he managed to briefly outwrestle when it became obvious that the tubby Australian, like heavyset “Super Samoan” Mark Hunt before him, had the Beast’s number on the feet.

Expect Lewis’ immediate future to hold more of the same. The Black Beast never shows up in good condition, though announcers enjoy claiming he looks better than he did during a previous fight or has somehow gotten past his nagging back issues. On top of that, as powerhouse heavyweight Shawn Jordan—another vanquisher of Lewis—told me months ago, Lewis, while heavy-handed, isn’t particularly strong for his size. Styles make Lewis’ fights to a greater extent than the true legends of the game, near-GOATs such as Georges St-Pierre and current middleweight champion Israel Adesanya who adjust their own approaches to accommodate their opponents even at the cost of putting on a boring fight. Lewis will never be boring, and he might enjoy brief winning streaks well into his 40s if he gets matched with opponents he can trick into eating a big right hand. And you can bet I’ll watch those fights as I’ve watched all of Lewis’ previous UFC outings, because the Black Beast is the undisputed king of the “two true outcomes” brawlers: kill or be killed. Even when that either/or tips heavily in favor of “being killed” and a new generation of big boys begins making their bones off his old ones, those beatdowns will remain appointment viewing.