Reflections on Marcelo Golm’s epic come-from-behind victory over Davion Franklin—easily my fight of the year so far. 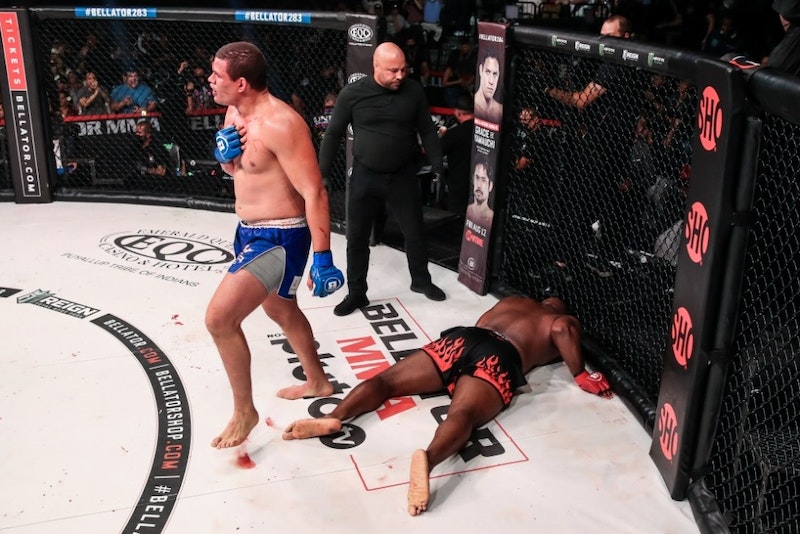 When Bellator booked Davion “All Day” Franklin to fight UFC washout Marcelo Golm, it was surely intended to be another step on Franklin’s road to inevitable coronation as the company’s homegrown heavyweight champion. That division, still somehow in the grasp of (perhaps artificially) inflated light heavyweight wrestler Ryan Bader, was some country for old men—four of the company’s top five heavyweights, Bader included, were over 39. Once-upon-a-time GOAT Fedor Emelianenko is 45 and last fought for the belt in 2019 at 42, while number-two contender Cheick Kongo lost his recent listless title challenge to Bader two weeks before turning 47.

Such senescence is unusual even by the senior-citizen standards of heavyweight MMA, so much pressure has been put on the impressive-looking Franklin, a 28-year-old former homeless man with an 80” reach who packs 265 pounds of mostly muscle on a 6’3” frame. Truly a freak of nature, Franklin looks as if someone grafted William Knight’s dense musculature onto Derrick Lewis’ long, wide frame; up until now, however, he has displayed worse endurance than either, which is saying something when Knight, who gasses after the first minute of the first round of his most of his fights, is in the conversation.

That lack of wind was on full display in Franklin’s previous fight against up-and-comer Said Sowma, who had an up-and-down start to his own career but always displayed excellent conditioning and movement—skills he used to stop the once-unbeatable former Bellator heavyweight champ Vitaly Minakov, an aging great now hopelessly distracted by the prospect of a career in Russian politics. Facing Sowma at Bellator 274, Franklin landed the more powerful blows, but Sowma landed more significant strikes and generally acquitted himself much better in terms of movement and ring awareness. He was dancing around, but he was in there with a man who outweighed him by 30 pounds, and he deserved the split decision that went against him.

Franklin, at least in my mind, had been exposed by Sowma—but the Bellator hype package before his Bellator 283 tilt glossed over all that. Once again, he was described as the real deal, the heir to the throne, the next great Jackson-Wink prodigy after Jon “Bones” Jones—critical now that Jackson-Wink light heavyweight prospect Christian Edwards has fizzled due to back-to-back losses, the most recent an understandable defeat to powerhouse wrestler Grant Neal but the prior one a mystifying knockout at the hands of fish-bellied Ben Parrish.

Marcelo Golm, the big but soft-bodied Brazilian fighter assigned the task of losing to Franklin, presented an interesting puzzle. He entered the UFC in 2017 at 25 and submitted Christian Colombo with ease, then proceeded to lose decisions to tough wrestlers Timothy Johnson and Arjan Bhullar before enduring a flash knockout at the hands of Russian striker Sergei Pavlovich. These three defeats look much better in retrospect, with Pavlovich now a rising star in the UFC, Johnson a former title contender in Bellator with some major wins under his belt, and Bhullar sitting pretty as the heavyweight champion of ONE Championship. Unfortunately, they also earned Golm his walking papers from the company, whereupon he ran off a streak of three straight finishes in smaller promotions—including a TKO of DJ Linderman, a solid veteran—before signing the contract to fight Franklin. There was something in the way Golm looked as he awaited the beginning of this fight—something primal, hungry, nasty, atavistic. A Cro-Magnon glower, you might say. Neither commentator Mauro Ranallo nor color commentator “Big” John McCarthy remarked on it, though, instead focusing on talking up Franklin.

Their tunes would change, though, because every minute of this back-and-forth fight was a thing of beauty. Franklin was the best I’ve seen him, a complete fighter capable of mixing heavy strikes with smart wrestling. He hit Golm with a number of shots in the first round that should’ve “laid him among the sweetpeas,” as Popeye the Sailor used to say, but the Brazilian ate them like a boxed lunch even as a stream of blood issued from a deep cut on the side of his forehead.

That first round, which saw Golm hitting Franklin with much cleaner combinations and moving more gracefully, also witnessed something even long-time MMA journalist Jonathan Snowden had never seen in a fight: while Mauro Ranallo, an underrated play-by-play guy who has

covered lots of pro wrestling events in his day, began to wax poetic about Franklin’s love of pro wrestling, “All Day” hoisted Golm in the air and performed a picture-perfect death valley driver—a pro wrestling move popularized by the late Louie Spicolli in which a brainbuster-type slam is done from a fireman’s carry. Franklin fell in the direction that Golm’s head was facing, driving it hard into the mat, then scrambled and clinched again until he could slam Golm once more, whereupon he began raining down heavy blows upon him. At no point was Golm even slightly rocked by any of this, though—the most muscular part of Golm’s body was his preternaturally thick neck, and however strong Franklin’s blows might have been, they were nothing on the order of the ones from Sergey Pavlovich that did lay Golm “among the sweetpeas.”

The second and third rounds were all-action, back and forth affairs that featured each man taking turns blasting away at the other. Franklin did his best work on the ground, using wrestling to corral Golm, but when Golm was on his feet, he had his way with Franklin. “All Day,” to his credit, didn’t run out of gas until the very last moment, when Golm, having essentially crashed to the mat atop the exhausted Franklin, flattened him out and finished him with a rear-naked choke 20 or so seconds before the end of the third round.

Had Franklin survived, he could’ve won, because both the first and the second rounds were close enough that “it was anyone’s fight,” as commentators are wont to say when they have little of substance to add to what has become a coin-flip decision. Golm, however, took matters out of the judges’ hands—always a wise move—and removed the zero from Franklin’s record. Hack writers never tire of typing “he wanted it more,” but it applied here. Golm was a savage in the cage, with Franklin growing increasingly wide-eyed as his heaviest jabs and straights did little more than draw additional blood from his tireless foe.

As spectacles go, this was top-tier, a throwback to the pioneer days of MMA—even redolent at times of Don Frye going to war against doomed yet indomitable pro wrestler Yoshihiro Takayama. Golm and Franklin wanted to pound on each other; Franklin seemed shocked when Golm didn’t fall; Golm sealed the deal by wresting the tap from Franklin by sheer force of will. Neither man had anything to be ashamed of, but only one of them won, and it wasn’t the guy we were expecting. Golm, who has the requisite Brazilian near-total package of good striking and good jiu-jitsu, is suddenly a rejuvenated fighter and dark-horse title contender; Franklin, who fought better than he ever had before, finds himself going back to the drawing board. Their fight, a hall of fame-caliber slugfest, will soon pass into the mists of history, but for those who bothered to watch, it was one hell of a ride.