I Did Meet Yogi Berra

Texting a friend to verify a foggy childhood memory. 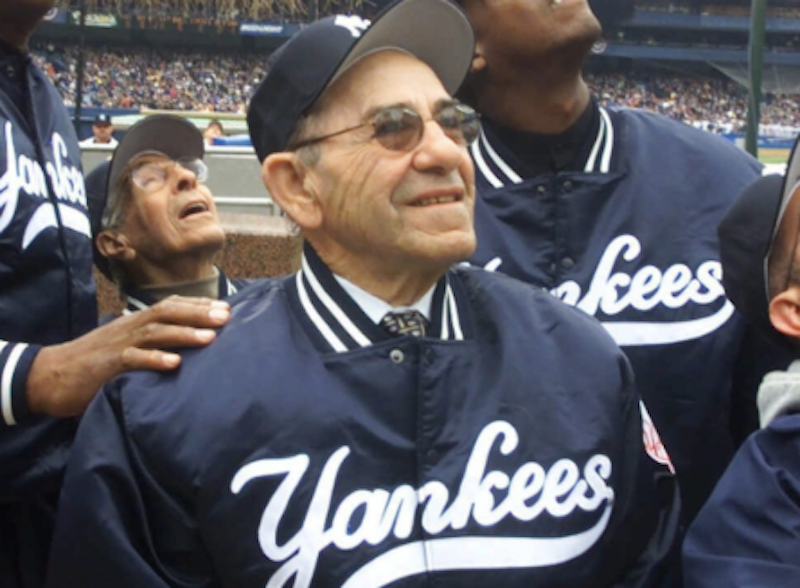 It was after my son’s weekend baseball tournament in Delaware had ended during a thunderstorm; his team won 21-2, barely getting through the time limit requirement before the lightning announcement boomed over the loudspeaker and shut the fields down. We were at a local seafood bar and grill, ordering grilled tuna (them) and wildberry bourbon (me). I don’t remember how Yogi Berra’s name came up, but I said, “I met him when I was a kid.”

“No you didn’t,” said my son and my husband simultaneously.

“I think I did,” I said. I have a bad memory, shredded from years of migraine prevention medication and the thousands of migraines themselves.

“How are you ‘not sure’ if you met Yogi Berra?” came the reasonable question.

“It’s like I can picture him exactly: he was short, had big ears, and a really friendly smile, and he was really nice to my friend and me,” I said. “We were in Boston I think. At some little deli, and the people there knew him and introduced him to me, and that’s all I remember but I always wonder if it was a dream or something.”

My husband and son looked at me like I was nuts, a look I’m not unfamiliar with. I decide I’m going to text my childhood best friend, who was a maid of honor in our wedding, to ask her about this 40+ year old memory, to see how much I’ve lost my mind. This text is not unexpected by her; over the years she’s gotten texts about details on the time we shoplifted our prom gowns or how she singlehandedly taught me about the existences of abortion and the Holocaust since neither were taught to us in Catholic school. She texts back immediately.

Yes, we met Yogi Berra. Liz had met him a thousand times because he came into her grandfather’s deli and market in New Jersey (not Boston, where we’d gone on another trip) every morning and ordered the same thing, a coffee and a roll with butter. For some reason the roll and butter memory came back, because I remembered wondering why someone would eat that for breakfast every day.

Liz said she had dozens of signed wiffle balls from over the years when she was a kid, all the neighborhood kids did, and they all played with them until the signatures were worn off, because even though they knew he was somehow famous, he was also just a guy they saw every day, and why would a kid know the significance of saving something like that. The local kids didn’t think of Yogi as an 18-time MLB All-Star who won 10 World Series, more than any other player—participating in 21 if you count coaching, including catching a perfect game during the World Series in ‘56.

These were facts I was Googling at the table to impress my son, who managed to eke out a reasonably impressed smirk from beneath the truck ton of eyeblack the kids today wear, regardless of the weather. Soon enough I’ll be calling Liz again to remind me of another childhood memory, and it will be déjà vu all over again.