I’m In Any Team But the Yankees Mode

Red Sox likely out of the money. 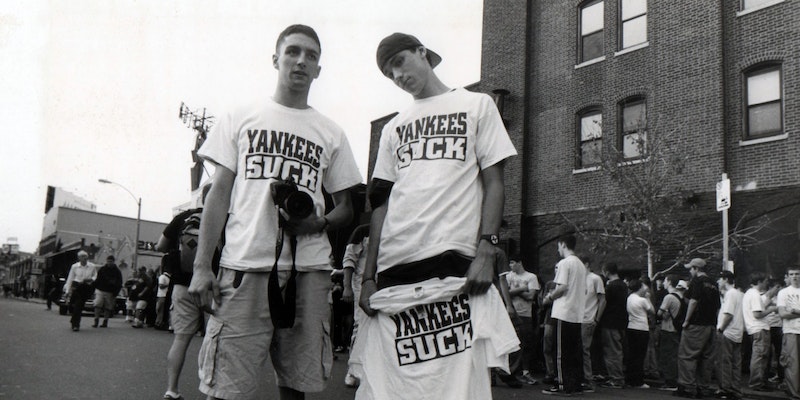 Early in April, I wrote a long story about the upcoming Major League Baseball season (it was Opening Day) and expressed great pleasure that the owners and players, feeling heat from fans, made an unexpected last-minute deal to craft a new Collective Bargaining Agreement and proceed with a full 162-game slate, along with expanded playoffs and the crummy change next year that’ll create a more “balanced” schedule, which means intra-division play will be reduced from 19 games to 14. I hate that, since as a Red Sox fan, the stomach butterflies are zilch when the Royals come to Fenway Park rather than the Yankees.

I also projected, with the caveat that pre-season predictions are meaningless, that the Sox would finish in the money this October, and possibly take home their fifth World Series this century. That won’t happen—a roster decimated by injuries (no sympathy necessary, it happens to all teams to varying degrees every year), and a poorly-constructed bullpen currently has Boston in last place—and so the “hot stove season” looking at 2023 has already commenced for my fellow Sox fans. At least those who aren’t too pissed off over the team’s performance and the quizzical maneuvers of the owners and staff. The unexpected is one aspect of MLB that I’ve always liked; unlike other sports the season is so long—April until October—that the twists and turns are a constant week-to-week.

It’s only fair to point out a passage from that earlier article that’s so laughable, and weird, now that it’s early-August, that it ranks alongside my hundreds of mistaken predictions over the years. (On a more serious note, here’s hoping that my oft-stated prognosis that Donald Trump, a one-man Republican wrecking crew, won’t run for president in 2024 and if he does, gets humiliated and then returns to reality TV where I’ll never see him again.) I wrote: “If your team’s out of contention—as the Baltimore Orioles always are—there’s still the diminished but tangible pleasure in seeing top prospects get their first licks in the big leagues… Next to the Yankees, the Blue Jays are my least favorite team; it’s not rational, but I’m pissed at Canada in general for its [excessively] bureaucratic government and nutty Covid rules. I hope the Jays finish at 82-80, a game better than the Yanks (the Orioles, whose management is trying for a $10 million payroll, have fifth place [in the A.L. East] locked up).” The Yankees are having an insane season, so I’m in full Anyone But the Yankees mode now, and hope Aaron Judge signs with the Angels sometime in November. As for Jays, I think they choke down the stretch.

Although I live in Baltimore and believe the O’s Camden Yards is a Top Three baseball venue, I’m not crazy about the team (although I wish the Sox had Cedric Mullins); part of that is because the Angelos Family, which owns the franchise, are, charitably, malevolent fruitcakes, who, despite protestations to the contrary, might sell the club and it’d be Bob Irsay redux, with Mayflower vans rumbling to Nashville or Las Vegas in the darkest of nights. Nevertheless! The Orioles are a “feel-good” story this season, playing at around .500 with an outside chance of making the playoffs. (That’s despite trading the popular Trey Mancini and closer Javy Lopez.) That’s good for the city of Baltimore, not only for residents (I’m happy for writer Rafael Alvarez, a native Baltimorean who, in what can only be between him and his maker, calls the city “The Holy Land,” and has had a ball of late posting, usually with a hot dog or crab, “Ain’t the beer cold!” exclamations after an O’s win on Facebook) who’ve suffered with losing teams in most years for the past 25 years, but local businesses.

As for me, because Chaim Bloom (Red Sox GM) has made some strange moves—my son, Booker, dedicated Boston fan who applauded the hiring of Bloom from the Rays, now hopes he gets fired—I’m the one with the “diminished but tangible pleasure” of watching players I’d never heard of or thought were two years away from the big team, put on a reprise of the 1962 Mets, with an awful defense and lack of baserunning skills that occasional NESN commentator Tony Massarotti said last Friday night, as the Sox frittered away a possible win, is just “embarrassing.” Mazz also said, and this was pre-deadline, that the Sox organization needs to do some “serious soul-searching from top to bottom,” a criticism that might leave him out in the cold for future broadcasts. I still tune in for every game, but this year, like 2020 (last place), I’ll switch to the latest Acorn or Britbox offering by the fifth inning if it’s a blowout. Robson Green’s mishaps on Grantchester don’t come close to matching Franchy Cordero’s horrendous play at first base or the outfield. Franchy’s now gone, thankfully.

I didn’t see the trade of catcher Christian Vazquez—one of the best at position in the Majors, since he can hit and field—coming, naively assuming they’d sign him in the off-season. That was a stunner, and has cheesed off some of his teammates. His putative replacement, Reese McGuire from the White Sox (the Sox gave up can’t-find-the-plate-most-nights-Jake Diekman for him) doesn’t have much of a stick, and does carry the stigma of a 2020 arrest in Florida for public masturbation. That’s creepy, and led my friend and Splice Today contributor Tom Joyce (a “moral conservative”) to tweet, “Great, the Sox have traded a Christian and get back a Sinner.” Aside from Jarren Duran’s homer at Minute Maid Field Monday night to win the game against the great Astros (whom I hope embarrass the Yankees in October, Tom’s quip was the lone baseball highlight on Monday.

The Sox didn’t do much during the trade deadline, jettisoning Vazquez, picking up journeyman Tommy Pham, and first-baseman Eric Hosmer from the free-spending Padres (I’m glad the Sox won’t have to pay Hosmer’s salary, since that might let them give Rafael Devers a blank check), all of which probably means zip. But maybe this is another prediction gone wrong and Boston will play meaningful games this fall.