It takes a kid to remind you how great a kid’s game is. 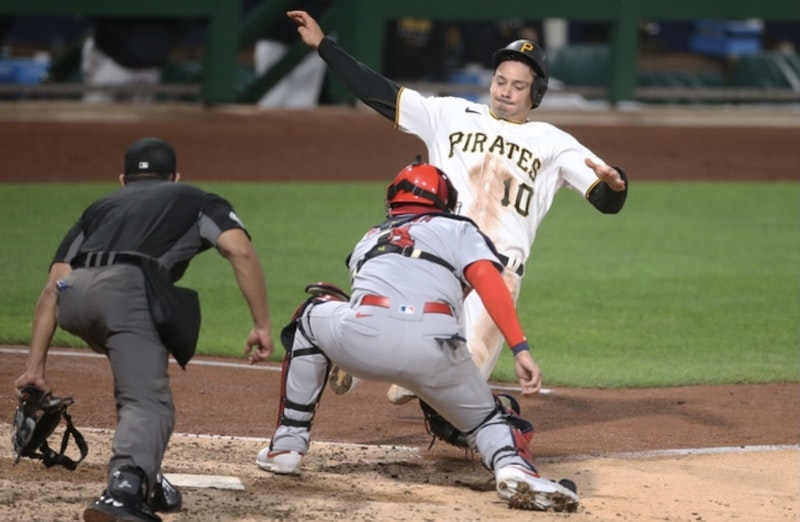 It might sound corny as hell, but I played catch with my 12-year-old cousin in Ohio recently and it has renewed my somewhat waning interest in baseball. It was a rural setting, the middle of nowhere in Knox County, and he had rigged a batting tee to hit into his stepdad’s golf net. I see this expressive kid once every two or three years during visits. Just a drop-in while in town for a graduation. I wasn’t even sure if he was home. But he emerged from the house and immediately showed me his aluminum bat where he’d marked the ball smudge from his “best hit.” He asked me about Jackie Robinson’s grip on the bat which he had seen in a TV documentary. He said he was going to try separating his hands just slightly, as Jackie sometimes did. While the other adults peeled away for a house tour and catching up conversations, Jameson and I moseyed into the yard. He had a Dick’s Sporting Goods “league” baseball in his hands.

I soon discovered this kid had genuine enthusiasm for the game, his Little League action takes place on the same field where his grandfather played some 60 years ago. He tried Jackie’s grip off the tee and was hitting screamers into the right-center gap. Timeless stuff worthy of a James Earl Jones speech in a Kevin Costner movie. But this was real, especially to a super-jaded Pirates fan who was close to giving up on baseball after the recent rules changes and the economic disparities that ravage clubs like my Pirates. The day I played catch with Jameson, the Buccos gave up 18 runs in an embarrassment against the Cardinals. He saw the Pirates bumper sticker on my car, and I told him maybe I should cover it up. He was impressed that I could throw right to his chest from 15 yards, having told him I retired from beer-league softball in Brooklyn almost 20 years ago. “It’s like riding a bike, except you are throwing a baseball,”I said. He laughed. Of course he laughed. He seemed to remember I was his baseball-obsessed cousin and it did feel fulfilling to have the ball land in the web of a leather glove, even if it was slightly too small for my hand.

Jameson could throw. He showed me his knuckle ball. His team isn’t winning much, and I said, “I know that feeling.” Then I noticed his smile every time he caught my toss. I smiled too. It was a magnificent 72 degrees on a May Sunday and just over by the rise in the yard behind us you could see for miles into the Amish countryside. I remember the specific brand of the baseball because one old habit of playing catch is to briefly examine the orb when you take it out of your glove for the return throw. It’s as if the ball might’ve changed somewhat in flight, or replaced by an imposter, or perhaps developed a loose seam?

The pressure was on to not drop the ball because looming in thatlarge back yard was not only a loud goat who looked like Satan, but a chocolate Labrador who liked to grab stray baseballs and destroy them immediately. At first we couldn’t find two gloves for the catch, and by some random miracle I noticed them in a bucket in the corner of the garage. We kept the ball away from the dog named Beavis (hello 1990s!) and you go through the process of tossing with a leg kick, or maybe not, some spin, or maybe not, and a lunging grab at a low ball which makes you think you’ve still got it. Let’s get back in that Prospect Park beer league.

I’ve encountered many young people in upstate New York via my teenage daughter and can count on one hand the number of them even slightly interested in baseball. It doesn’t really concern me as I carry a personal love of the game that will probably be eternal. I’ve taught my daughter most of the baseball announcer cliches, including the ones for slow runners (“he’s got a piano on his back”) which she uses to impress her friend’s fathers who are unfortunately Mets fans. My 92-year-old mom and I still argue about Pirates heavyweight DH Daniel Vogelbach. She doesn’t like his style (“He’s so conceited,” she says) and I happen to like what the 270-pound Floridian brings to the oft-visited table. He’s Chris Farley with a great eye for the strike zone and a short power stroke that’s fun to watch. He wears eye-black and looks like a cartoon drawing of a ballplayer. Of course, before I could finish writing this he went on the IL with a bum hamstring.

You play catch and realize the game is named after the round object you’re holding every other 10 seconds. The rudimentary skill required to play the game is to catch and throw. You suddenly behold, again, hitting the cutoff man and the crisp relay throw by a middle-infielder to the catcher to nail a runner. You realize that this kid on the receiving end of your throw puts on a uniform that may or may not fit properly, is driven by an adult to a distant baseball diamond, gets out of the car and joins other kids wearing the same uniform and they’re collectively ballplayers. Cell-phone toting adults are there to see them play the game, which will probably be discussed and dissected on the car ride home deep in the Ohio countryside. Post-game ice cream? Probably. Americana writ large.

Jameson and I wrapped up our catch as it was time to go. My oldest brother, his grandfather, showed me the Trinidad Scorpion peppers he was about to plant on the property. He was a great catcher in his day, as was my other older brother who won a league championship on the same field where Jameson plays his games as the shortstop for his squad. I remember my brother had his picture in the local paper making an excellent tag (after receiving a crisp relay throw) on a guy trying to score at homeduring the championship game. He looked like Johnny Bench (with 1970s feathered hair) in that photo, which was appropriate because Bench was his hero. My preferred catcher was Manny Sanguillen, but that’s just me. I was proud to see my brother’s excellence captured in the newspaper on the front page of the sports section.

So if you’re a baseball fan and find yourself discouraged after getting caught up in the trappings of greedy owners, super-agent Scott Boras, the extra-innings ghost runner, Josh Donaldson as a jerk or Max Scherzer snubbing the Japanese ambassador for a ceremonial first pitch, go play catch with a 12-year-old who studies bat grips of former players and greets his rarely-seen cousin with a cheeky smile.

Thank you, Jameson, for helping me out and getting me back to writing about the game in some form. I hope you go 3-for-4 with three RBIs next week, while executing several 6-3 putouts with your strong arm.