The Week in Fights #2

Kana Watanabe triangle chokes her opponent instead of choking under the pressure, and Simon Biyong derails a slow-moving British hype train. 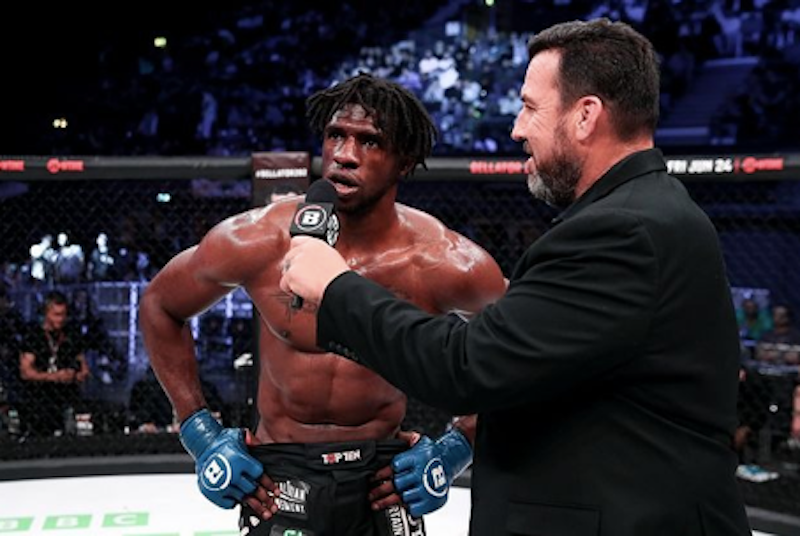 The week in fights went as it always does—full of exits and entrances, comings and goings, victories against all odds and collapses under pressure. We were treated to a pair of generation-spanning knockouts at Bellator 281, with Paul “Semtex” Daley seemingly bringing his hot-and-cold career to a close with a come-from-behind knockout of Wendell “White Walker” Giacomo and Leon Edwards’ middleweight kid brother Fabian Edwards restarting his own career by retiring legendary karateka Lyoto Machida with a vicious blow to the former UFC champion’s chin.

And there was also 39-year-old Jan Blachowicz in the main event of UFC Vegas 54, rounding back into peak form in a performance that saw him check enough leg kicks to obliterate Aleksandr Rakic’s already-injured right knee and delay the promising Serbian’s rise to the top—perhaps forever, if an expected six-nine month rehab goes poorly. Such is the cycle of life in the combat sports world, which continued apace in a pair of fights you surely missed if you had anything better to do.

Simon Biyong defeats Luke Trainer by unanimous decision, Bellator 281: Athletic fortunes rise and fall, sometimes buoyed by little more than an overhand right, an entertaining post-fight interview, and the sports media’s need to fill expensive dead air with cheap-as-free hot air. Fighting in front of a rabidly partisan crowd at SSE Arena in London, the 26-year-old, 6’6” Luke “The Gent” Trainer was expected to deploy his top-tier grappling and evolving striking skills—abetted in that case by an 81” reach—against 31-year-old Cameroonian Simon Biyong.

Despite his own prodigious physical gifts, the 6’6” Biyong was handled easily by Jackson Wink prodigy Christian Edwards—his own hype train recently derailed after a pair of unimpressive defeat—in a unanimous decision loss at Bellator 261. But Edwards, for all his recently-exposed weaknesses as a wrestler and grappler, is a skilled striker and could keep Biyong’s huge, winging punches at bay. Because that’s what Biyong, who resembles a taller and leaner version of his countryman Francis Ngannou, will do if left unchecked, winging big punches while displaying surprising stamina in the process. Alas, Trainer chose not to check him, preferring instead to eat or block Biyong’s monster shots as he attempted to win via some bit of ground-based submission wizardry.

Trainer showed excellent transition skills and a great degree of heart, wrestling his way out of numerous predicaments over three rounds while following in the grand English tradition of leaking blood from the thin, sieve-like skin on his face. He had his moments, but Biyong—who gave a compelling post-fight interview about the rising state of Cameroonian sports—never weakened. “He wanted it more” serves as sportswriting filler, usually employed as a euphemistic shortcut in lieu of writing that the stronger, more aggressive athlete overpowered his opponent. That’s what happened here, but Trainer, who’s still young and retains the upside of a plodding, well-rounded colossus like prime-period Ben Rothwell, isn’t going anywhere. Both of these men should be fighting at heavyweight, mind you, but that’s another story—and they, like all the other big men who lose the ability to perform the skillful dinner plate “push-away” maneuvers needed to cut weight, will eventually age into that weight class.

Kana Watanabe defeats Denise Kielholtz by submission (triangle choke, round 2), Bellator 281: Robert Whiting, the great chronicler of Japanese sports, noted in The Chrysanthemum and the Bat that Japanese athletes—over-coached and over-trained into early retirement while acculturated to fear failure more than anything else—have a reputation of some of the most frustrating “choke artists” in the history of organized athletics. This is the case with the country’s many great MMA stars and even more numerous failed MMA hopes—the latter a vast category of notables that includes august personages like Olympic gold medalist Satoshi Ishii, a world-class judoka so chastened by frequent, frustrating defeat that he moved to Croatia to train with Mirko Cro Cop, who had out-colded Ishii in both of their matchups, before eventually renouncing his Japanese citizenship and fighting under the Croatian flag (the land of the Rising Sun doesn’t allow people over the age of 21 to retain dual citizenship).

Judging from a relatively easy string of Rizin, Deep Jewels, and Bellator wins that ended with a quick knockout loss to current Bellator flyweight champion Liz “Girl-Rilla” Carmouche in June of 2021, Watanabe seemed to be of this failed-hope class. She’s a gifted international-caliber judoka who has built the rest of her MMA game around that skillset, as Ishii had done early in his career before training with Cro Cop and trying, however clumsily, to reemphasize striking. Also like the young Ishii, she was boring and mostly untouchable when everything went well, keeping fights on the ground or against the cage and finishing opponents with submissions or barrages of patty-cake punches sufficient to justify stopping the fight.

Until she met Carmouche, that is. The UFC veteran swiftly dragged the 33-year-old Watanabe into deep waters, swarming her with stand-up strikes, and Watanabe wilted like a cherry blossom in the stifling, climate change-impacted heat of a Tokyo summer—or at least that’s what I’d write if my imaginary editor, The Chief, was demanding I infuse a little more “regional color” into the piece (a more apt, fighting-specific reference would be “wilted like Ishii when he all but laid down for a declining Fedor Emelianenko in 2011”).

The fight against Kielholtz, a stout Dutch kickboxer with 50 kickboxing bouts and a split decision loss to formerly-undefeated Juliana Velasquez in a match for the Bellator flyweight championship, seemed as if it would follow the same script. Kielholtz hit Watanabe hard right out of the gate, and the stunned judoka had to rely on her ground skills to survive the first round. But instead of falling to pieces in the second round, Watanabe hurried to the center of the cage, quickly secured a takedown, and grappled with a surprisingly game Kielholtz until she finally submitted the kickboxer with a triangle choke.

Watanabe’s win doesn’t ease the sting of Rizin bantamweight champion and Japanese MMA superstar Kyoji Horiguchi’s recent Bellator collapses—including a last-second knockout loss to Sergio Pettis in a title fight he was winning on the scorecards—but it’s not nothing. Japanese nationals still remain outside the Bellator title picture, but perhaps not for long if Watanabe lands a rematch with Carmouche or a first fight with Velasquez, depending on which fighter prevails in their own title rematch.