The Week in Fights #3

On the scoring of fights, the status of Holly Holm at age 40, and the last stand of Junior dos Santos. 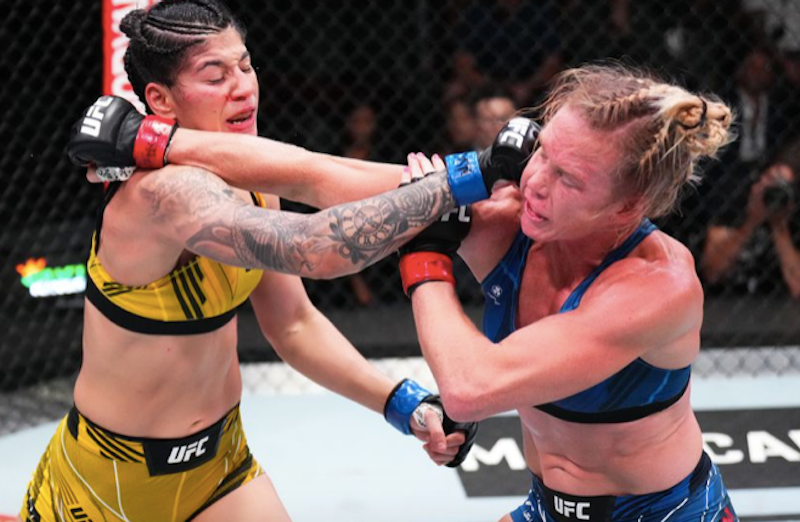 Taking a fight to the scorecards in mixed martial arts is something that happens, particularly in the lighter weight classes with their appallingly low finish rates. Regardless of its frequency, it remains a depressing way to conclude any clash of arms and men, whether a three-round bloodbath like the TUF 1 finale between Forrest Griffin and Stephan Bonnar or a five-round snoozefest like Carla Esparza’s second defeat of Rose Namajunas at UFC 274 (in which Esparza averaged six strikes landed per round and Namajunas seven). Decisions are par for the course in long, drawn-out boxing matches, but why here in MMA, when there is so little time for all that?

Then again, so many other good things have left the sport—Shogun Rua-style soccer kicks, knees to the heads of downed opponents, vintage Mark Coleman ground-and-pound headbutts, you name it. The promotions that allow one or more of these, like ONE Championship with its different rules vis-a-vis knee strikes, remain appointment viewing for that fact alone. Meanwhile, the greatest of the many innovations pioneered by the World Series of Fighting—now the boringly-renamed Professional Fighters League—is the practice of awarding point bonuses for progressively earlier finishes, meaning cash-strapped competitors chasing those $1 million grand prizes have all the more reason to cut off each other’s airways and bludgeon each other’s brains into a fine paste, tout de suite.

Simply, the heroic fight doesn’t go to the scorecards, nor does it devolve into a somnolent affair on the order of fin-de-siècle pro wrestling bouts and early UFC matches like the second Ken Shamrock-Dan Severn tilt—gloomy laydowns indistinguishable from softcore pornography save for their interminable length and lack of enthusiasm. A heroic fight ends only when one competitor or another is scarred for life, finished in the business, ruined utterly. This is certainly not “good, actually” in terms of the health and well-being of the combatants, but it constitutes closure of the sort that Khabib Nurmagomedov references when he reminds Conor McGregor that he could have killed him during their UFC 229 bout, which Khabib won via a neck crank submission.

Holly Holm defeats Ketlen Vieira by split decision, UFC Vegas 55: All of that, by way of prelude, brings us to Ketlen Vieira’s five-round split decision victory over former UFC Women’s Bantamweight Champion Holly Holm. The fight was decent enough—the 40-year-old Holm’s barrages of patty-cake punches and front kicks mixed with nearly 10 minutes of clinch control time against Vieira’s big looping swings (the announcers kept referring to Vieira’s “combinations,” but it seemed like she was merely winging one-offs with somewhat murderous intent). The decision was unsurprising too, with Vieira taking it 48-47 on two of the three scorecards due to her “effective” striking, which is based on “impact” and trumps effective aggressiveness and cage/ring control in order of importance. Holm won on judge Sal D’Amato’s scorecard for her pitter-pat, pillow-fisted efforts, which isn’t surprising given that D’Amato favors technical boxing over impact when judging a fighter’s striking (a few weeks earlier, he had helped 43-year-old Andrei Arlovski secure a seemingly undeserved split decision win over portly, free-swinging Jake Collier in a fight that played out much like Holm—Vieira would).

The outcome of this bout galvanized the MMA community, with partisans and stans on each side of this low-stakes debate championing one or the other fighter’s case and labeling as “casuals” any who dared to disagree with their interpretations of these admittedly convoluted rules. Holm’s case was simple enough: she out-landed her opponent by nearly 70 total strikes and racked up 10 minutes of clinch control. So was Vieira’s: she bruised Holm’s freckled, leathery skin, nearly equaled her in significant strikes landed, and had the former champ grimacing in pain whenever any shot connected, as aging fighters who’ve been on the receiving ends of too many bad kayos are wont to do (another point of comparison between “Pitbull” Arlovski and Holm, though the former has been knocked out far more often and more viciously than the latter).

Vieira’s victory was justifiable on many levels. The 30-year-old remains fleshy around the abdomen and full of unrealized athletic potential, thoroughly deserving of her own chance to lose to the winner of the upcoming bantamweight title rematch between Julianna Peña and Amanda Nunes. Holm, though she’ll always have my support, already received her moment in the sun, shattering Ronda Rousey’s invincibility myth, and even delivered two inspiring late-career reminders of her past glory, defeating Primo Carnera-like featherweight title challenger Megan Anderson and legitimate bantamweight contender Irene Aldana in convincing fashion. Not to mention Holm had her title defense and two other title shots and lost them all, wilting under the pressure each time.

“The Preacher’s Daughter” now resembles a stick of beef jerky left to age in the sun—exercised and trained to the hilt, like the twice-aforementioned “Pitbull” Arlovksi, until she’d become nothing but bone, sinew, and hide-like skin. I hope Holm and Arlovksi fight forever, but had her fight against Vieira gone even a few minutes longer, she likely would have lost it all. Ordering the completion of a deciding round is a better way to end these close fights, as is ONE Championship’s practice of judging fights in their entirety and the PFL’s AI round scoring (which isn’t yet used to determine winners but hopefully will be in the future). But I’m glad this fight ended when and how it did, because Holm got to leave with her dignity intact.

Dos Santos entered this fight looking like a million bucks, enjoying the sort of suspicious late-career physique resurgence experienced by many aging former main eventers now in the employ of Khabib Nurmagomedov’s Eagle FC promotion (PED offender Héctor Lombard, whose co-main event against repeat PED offender Thiago Silva ended in a no-contest when Silva hit Lombard with an illegal knee in the second round, similarly appeared to be in the pink of health at 44). The former heavyweight champ skipped around the ring, slamming Castro with leg kicks and peppering him with precise combinations, while barely being touched in return—a performance redolent of the three-fight winning streak that preceded his current five-fight losing streak, during which he clowned heavyweight mainstays Blagoy Ivanov, Derrick Lewis, and Tai Tuivasa, battering the indestructible Ivanov across five rounds and easily TKO’ing the latter two.

Alas, that was not how this encounter ended. Instead, I watched in bewilderment as dos Santos, struck only by intense pain, fell to the ground screaming after throwing the punch that led to the dislocation of his shoulder. The 38-year-old dos Santos had fought his fair share of wars in the ring and absorbed more than his fair share of punishment, but here his very body betrayed him—perhaps taxed beyond its diminishing natural limits by what years of experience leads me to believe might have been PED usage.

So be it, I suppose. These old men and women—and I’m one of them now, with my own injury to rehabilitate—can strut and fret on the stage as much as they might like, but they can’t control when the curtain descends. Maybe it comes down in a back-and-forth, white-knuckle struggle, like Holm’s shrewdly-fought loss to Vieira. Or maybe it falls like night amidst already-thick fog, the grayness blending into the darkness and eventually into nothing at all, as with dos Santos’ breakdown against Castro. Such is the way of all flesh: you keep making moves until you’ve got only one left—either exit gently or die right here on your feet, to the delectation of all and sundry.