The Orioles' Version of the Core Four 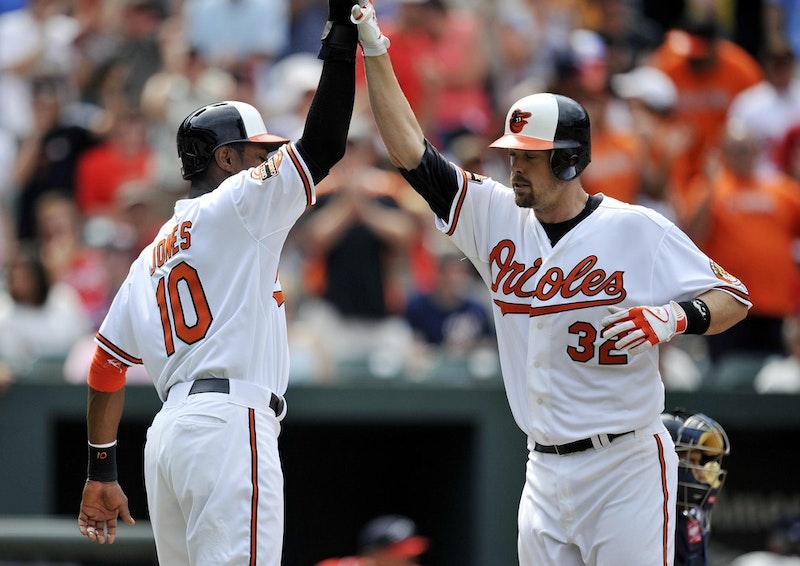 The Baltimore Orioles fairy tale 2012 season came to a disappointing end in Game Five of ALDS against the New York Yankees. The Yanks’ high-priced roster of veterans and future Hall of Famers proved to be too much for the upstart Orioles. Buck Showalter’s Birds get back to work this spring with the hope that they’ll have the superior talent in future matchups with the Bronx Bombers.

The Yankees have been a perennial contender since the mid-1990s thanks in large part to the performance of the “Core Four” of Derek Jeter, Jorge Posada, Mariano Rivera, and Andy Pettitte. The franchise’s obscenely high payrolls of the past decade have allowed the team to chase big name free agents, but perhaps more importantly allowed the core four to remain intact. Pettitte’s three-year detour to Houston briefly disrupted the quartet until he returned to wear the pinstripes in 2007. Despite A-Rod’s recurring hip injury the Yankees are expected to compete again in 2013. Despite their advancing age, Jeter, Rivera, and Pettitte figure prominently in the Yankees’ plans.

The Orioles have been criticized for their lack of offseason activity. GM Dan Duquette is clearly taking a wait-and-see approach with this bunch. While the Yankees are depending on players over or nearing 40 years old the Orioles will look for increased contributions from their young talent before seeking outside reinforcements. Orioles’ manager Showalter must sort through an abundance of young pitchers to round his starting rotation. It’s a problem many teams would like to have and one that seemed like a pipedream to O’s fans as recently as last spring.

The Orioles’ 29-9 record in one-run games last season earned them a Wild Card spot in the playoffs and the label “lucky.” After 14 consecutive losing seasons Baltimore fans would rather be lucky than good, but the O’s may have been both. Baltimore’s unprecedented success in one-run games may be unsustainable but a team built around Adam Jones, Matt Wieters, Manny Machado and the soon-to-arrive Dylan Bundy has more than luck on its side.

Jones has evolved into the type of leader the Orioles have been in search of for over a decade. He’s a dynamic force on the diamond and a charismatic, good-humored, articulate representative for the Orioles off the field. Jones cemented his standing in the community as he followed the Baltimore Ravens on their own magical run through the NFL playoffs, and has emerged as the team’s unofficial spokesman, taking to the airwaves to denounce critics and declare that his Orioles are for real. Jones agreed to a contract extension last summer that will keep him in Baltimore until at least 2018.

Wieters has gone from struggling prospect to All-Star catcher in two seasons. He may not be a vocal leader like Jones but Wieters is Baltimore’s undeniable field general. He’s a rock behind the plate and the type of steady everyday force Orioles fans came to love and respect in Cal Ripken. Wieters and Jones struggled at the plate in their first taste of the postseason last fall, but the duo will be looking to build on the success of 2012 and make a bigger dent in the playoffs this time around. Wieters isn’t eligible for free agency until 2015 but he’s already hinted at his desire to sign a long-term extension with Baltimore.

After years of whiffing on first round selections the Orioles appear to have scored big with Wieters, Machado and Bundy. Machado debuted last August and immediately made an impact at the plate and in the field. The converted shortstop played a stellar third base down the stretch and gave the bottom of Showalter’s lineup some extra punch. Machado will team with J.J. Hardy to give the Orioles a splendid defensive combo on the left side of the infield. Machado, who is expected to develop into an above average offensive player, is under team control through the 2018 season.

Bundy has only pitched one inning in the big leagues but he could arrive as a member of the Baltimore rotation as early as this summer. The Orioles are hoping that Zach Britton, Steve Johnson, Jake Arrieta, or Jair Jurrjens wins the fifth spot in the rotation this spring. If they all falter, then the 20-year-old Bundy could be next man up. Bundy is generally regarded as the best pitching prospect in baseball. If he’s as good as advertised Bundy could team with Wieters, Jones, and Machado to give Baltimore the type of core four that propelled the Yankees during the last 16 seasons.