The L.A. Angels Will Continue To Underperform

The Angels can’t top the Rangers, even with their offseason acquisitions. 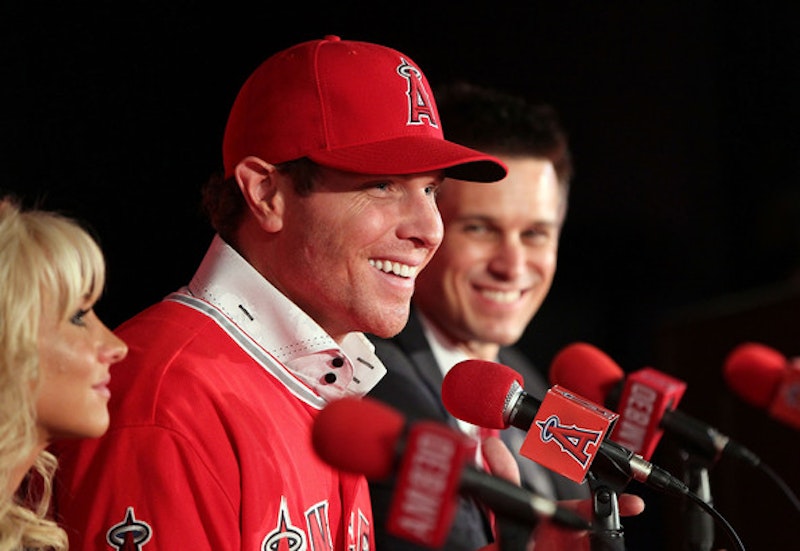 Don’t believe the hype, the Los Angeles Angels will languish in mediocrity once again. After spending big last winter with the acquisitions of Albert Pujols and C.J. Wilson, the Angels were primed for success, and they were all but guaranteed to win the division. And that was before Mike Trout putting up a 10.0 fWAR season even seemed like a possibility. Not only did they lose the division, they came in third. The solution? Sign Josh Hamilton and acquire a bunch of back-end starting pitchers, right? Apparently that’s what GM Jerry DiPoto thinks.

He took the wrong course of action in bulking up his team this offseason. If anything, the Angels do not need another bloated contract. The Pujols deal was a mistake, that was obvious the second he signed it, but there was nothing DiPoto could do about it a year later. Pujols still has tremendous upside, too; it’s hard to imagine that the three-time MVP won’t put together a couple more stellar seasons. Having one albatross contract won’t kill a team. With two, however, it’s much harder to build a successful ball club. Josh Hamilton is a great baseball player when he’s healthy and motivated. But the lefty’s always an injury away from the DL. As for motivation, It’s hard to imagine that he’ll have much of that after signing a five-year/$125 million contract. Motivation to succeed drives athletes. It’s the reason why so many players have career years when their contracts are set to expire. It’s also the reason so many players’ performance falls off a cliff once they sign a long-term deal. John Lackey, Barry Zito, Vernon Wells, Alfonso Soriano, and Carl Crawford are just a few examples. It would be surprising to see Hamilton produce at the same level in 2013 as he has with the Rangers.

And then there’s the pitching. It’s amazing that such a good rotation has fallen so far in less than a year. After the trade deadline, the rotation boasted Jered Weaver, Zack Greinke, Dan Haren, and C.J. Wilson. Now only Wilson and Weaver remain, and their names may be more impressive than their performances in 2013. Weaver has taken a lot of flack recently for being overrated, and while yes, he did get lucky in 2012, the righty is still an excellent pitcher, and a true ace. But Wilson is overrated, and people are starting to realize that. In 2012, the lefty let his BB/9 creep back up past 4, allowing his FIP to skyrocket to 4.04. All in all, that isn’t too bad, and his 2.5 fWAR isn’t shabby, but you should expect more from your number two starter, especially one that’s being paid so much. DiPoto’s insurance plan, in case Wilson totally tanks, is... Joe Blanton. Incredible, and they’re overpaying him, too. I wouldn’t even sign Blanton for one year/ $500K, let alone the two years/ $15 million the Angels forked over. For an extra $500K they could’ve signed the much more effective Brandon McCarthy. To round out the rotation, DiPoto traded for Jason Vargas and Tommy Hanson, both of whom have some upside, but very little certainty. This is a bad rotation.

That’s not to say the Angels will be a bad team. They just won’t be as good as some sportswriters are predicting. In all likelihood, Mike Trout will contend for the MVP again, Pujols will hit well, though not as well as his St. Louis years, and Hamilton will be slightly disappointing. And that won’t be enough to top the Rangers, who are foolishly underrated.