Looks like another dismal year for baseball in Seattle. 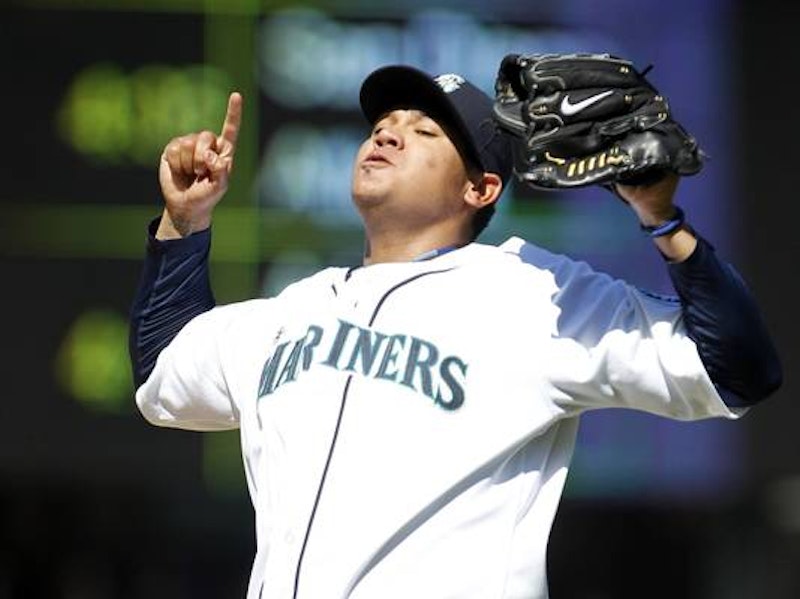 The Seattle Mariners finished 75-87 in 2012 despite allowing the second lowest run total in the American League. The Mariners’ pitchers were betrayed by their offense, or lack thereof, for a fifth straight season. Seattle, which has been one of the American League’s worst offensive teams for years, took some interesting steps to add power to its struggling lineup this winter.

The big news out of Seattle was the seven-year contract extension for ace right-hander Felix Hernandez. The Mariners guaranteed the “King” $175 million dollars to anchor what could be one of the AL’s most exciting young pitching staffs. At just 26 Hernandez will play most of the contract during his prime. Seattle also has three highly regarded young starters in Taijuan Walker, Danny Hultzen, and James Paxton. The Mariners could soon feature a talented homegrown rotation. The cost certainty of the other starters, who will be under team control for as much as seven years, will help to soften the blow of the Hernandez contract.

The Hernandez extension was preceded by trades for one-dimensional sluggers Kendrys Morales and Michael Morse and the curious free agency signings of Jason Bay and Raul Ibanez. The Mariners of the past few seasons relied on steady pitching and stellar defense, playing to the strengths of their spacious ballpark. The formula worked well at home but led to some dismal road records over the past five seasons amassing a record of 152-250 away from Safeco Field.

The Mariners have gambled by sacrificing flexibility and defense to add the likes of Morales, Morse and Ibanez. Jesus Montero, who was acquired from the Yankees for pitcher Michael Pineda, was considered a premium offensive prospect when he came to Seattle. The 23-year-old catcher struggled at the plate in 2012 and posted a paltry .605 OPS in 264 at bats in Safeco. Montero, who has long been considered a liability defensively, caught just 56 games in 2012 and spent much of his time as the designated hitter. Montero will be expected to log increased time behind the plate this season to make way for Ibanez and Morales to DH. A significant increase in Montero’s catching workload could come at the detriment of Seattle’s pitching staff.

The Mariners are expected to give Justin Smoak another chance as the everyday first baseman. The 26-year-old Smoak hit just .217 last season and is running out of chances to fulfill the promise that made him the Rangers’ first round pick in 2008. Smoak’s presence at first will limit the newly acquired Morales to the designated hitter role, pushing Morse and Ibanez to the outfield. Morse played an adequate left field for the Nationals last season but his lumbering style could be disastrous in the spacious gaps of Safeco. The 40-year-old Ibanez played 90 games in the outfield for the Yankees in 2012 and could be asked to do the same in for Seattle.

Jason Bay was signed to a one-year deal after a disastrous run with the Mets. Bay hit a paltry .165 in 70 games for New York in 2012. He’ll be looking to rebound and get his career back on the right track. Bay gives Mariners’ manager Eric Wedge another aging option in the outfield.

The Mariners should be credited for attempting to solve their ongoing offensive woes this offseason but the execution of the plan fell flat. They may have gained some offense on the outfield corners and behind the plate but the traditionally stout defense will suffer. Center fielder Franklin Gutierrez may be exhausted by mid-May covering for the defensive shortcomings of Morse, Bay, and Ibanez. The Mariners didn’t make a major commitment to any of the newcomers as all four will be free agents following the season but the presence of four veteran hitters fighting for at bats as they approach free agency could put Wedge in a precarious position. For a team seemingly intent on building around pitching and defense the 2012 offseason represented a significant departure from the blue print.