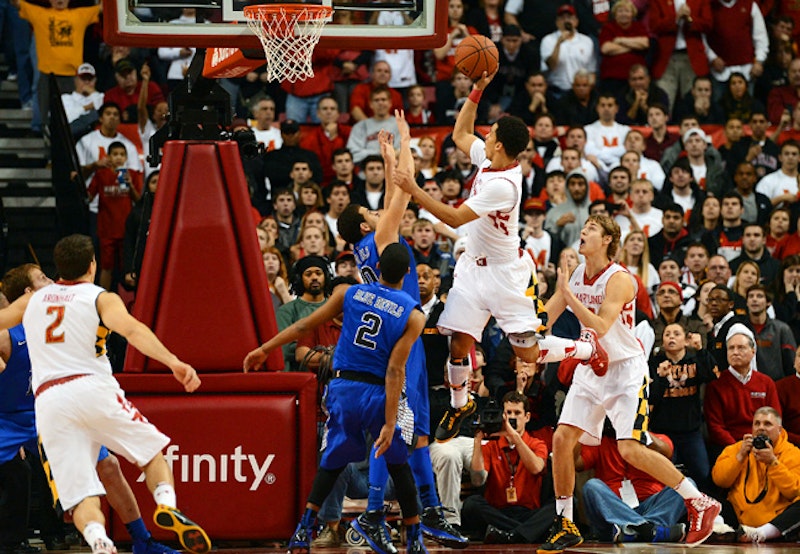 The Maryland Terrapins men’s basketball team scored the biggest victory of Mark Turgeon’s brief tenure in College Park when they toppled the Duke Blue Devils last Saturday night. The win gave the young Terps a signature win to bolster their resume for Selection Sunday and gave fans the last laugh in the on-again/off-again rivalry between the two schools. Maryland will leave for the Big Ten after next season and the Terps are unlikely to host the Blue Devils again next year. The ACC schedule makers won’t be doing the departing Terps any favors in their final tour around the league. If the win over Duke was the high point of Maryland’s season the follow- up on Tuesday against Boston College was the low point.

Maryland squandered most of the equity they gained in losing by 11 to a struggling Boston team. I’m not going to say that losing to the Eagles ended the Terps’ hopes of reaching the NCAA tournament but it did add a signature loss to the resume; not what you’re looking for in February. The Terps have been a bit of a roller coaster this season and some fans have started to question the long-term viability of Turgeon.

Maryland probably has to win four of their last five conference games to even be considered a bubble team at this point. The remaining schedule doesn’t look too imposing but for a squad that struggles at the point nothing comes easy. The Terps are one of the worst teams in the country when it comes to committing turnovers. They overcame 26 turnovers to beat Duke due in large part to an uncharacteristically good shooting night.

Maryland will host Clemson on Saturday. The Tigers are below the Terps in the league rankings and are just 13-12 on the season. The loss to Boston College turned the Clemson matchup from “winnable” to “must-win.” After Clemson the Terps have road contests at Georgia Tech and Wake Forest. Again, two winnable games, but fans have watched this Maryland team blow a number of such games this season. If Maryland can run the table against Clemson, Georgia Tech, and Wake Forest they’ll need to beat either North Carolina at home or Virginia on the road to receive any real tournament consideration. Even so, the lack of “signature wins” could make a few ACC tournament victories a necessity. The real irony is that Maryland’s best chance to register another resume building win would be to best Duke in the ACC tournament.

A late run to squeak into the NCAA tournament would certainly do wonders for Turgeon’s perception in the Baltimore/Washington area but the Terps seem ill-prepared for March success. The deteriorating play of once promising point guard Pe’Shon Howard has wreaked havoc on Turgeon’s rotation. After a promising freshmen season Howard has regressed to the point that he no longer looks like a viable ACC player. Turgeon has been forced to play turnover-prone freshman Seth Allen at the point and the offense has struggled to find a rhythm. Sophomore Nick Faust, who was considered a vital recruit when Turgeon took the job, has failed to progress in his second season in College Park. Faust still struggles to shoot from the outside and has failed to find a consistent role in the offense. The Terps’ struggling backcourt makes a run through March Madness an increasingly unlikely proposition. Incoming freshman PG Roddy Peters will have a chance to play major minutes next season.

The Terps’ one shining moment for the 2012-2013 season probably came last Saturday when they downed Duke, stormed the court, and puffed out their chests for a few days. Reality set in quickly for this flawed and inconsistent bunch of youngsters. Maryland’s best hope at this point may be to offer Ray Lewis a chance to walk on and have him announce his retirement at the start of the ACC tournament.