Yes, The Tour De France is Exciting to Watch

A viewer’s guide to the upcoming pro cycling event. 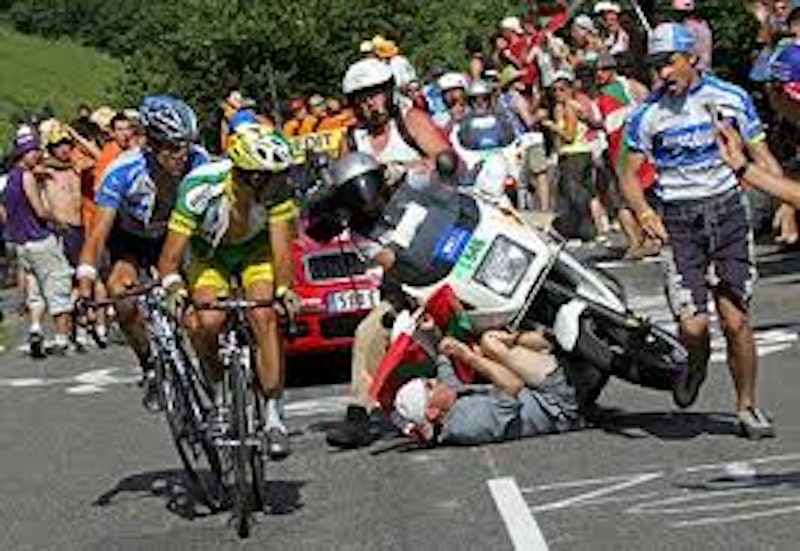 To the untrained spectator the Tour de France looks like a bunch of very tired people riding bicycles around. They pass through crowds of deranged Europeans who scream, shake flags, and hurl stuffed animals, confetti, water bottles, themselves and one another in front of the cyclists. The riders look at one another, furtively, sometimes aggressively. Sometimes they make wan hand gestures. People dressed like cell phone salesmen lunge out of the crowd to hand them water bottles and little cloth bags of nutrient gel.

Cars pass through the peloton, apparently without plan; riders hold on to the doors and have long conversations with the drivers. From time to time unseen occupants of the cars hand the riders more water bottles, which they stuff into their pockets and the backs of their jerseys. Inflatable arches straddle the road here and there. Motorcycles weave through, cameramen riding pillion. At the end of the stage the peloton draws into a line and breaks apart. Someone finally lurches to the front, sailing over the line, usually making another kind of cryptic gesture. It does not sound like an appealing sport to watch, but it is.

There are rules and strategies in pro cycling, and if you watch a few stages of the Tour (broadcast this year on a relatively un-obscure branch of NBC Sports) you will begin to pick up on them. Pro cycling is a team sport with individual winners—teams attempt to propel their captains to victory in the general classification. The GC win goes to the rider who finishes the Tour with the shortest total time, so it’s possible to win the Tour without winning a single stage.

Pro cycling teams consist of various types of contenders (sprinters, climbers, all-rounders) and domestiques. A domestique (French for maid) helps the team’s elect by fetching water and food, dragging them up mountains (the rider at the front of a group does more work and provides an aerodynamic advantage for the riders behind him), or setting them up for stage-finishing sprints. Domestiques are often strong, even spectacular riders, but the rules and politics of the pro peloton favor teams that pick a favorite and work together to earn a win.

Riders also win other prizes—the Tour features four trophy jerseys, which riders wear for as long as they qualify for them. The overall leader takes the yellow jersey (maillot jaune, if you want to impress your friends with your authentic Euro fan-ness). The leader in the points classification (calculated from mid-stage sprints and stage wins) wears the green jersey; the King of the Mountains gets the polka-dot jersey for being first over the highest number of climbs (this often goes to a courageous solo rider who breaks away from the peloton and completes a stage alone). And the white jersey goes to the best young rider; there are also color-coded numbers for the most aggressive rider (sometimes more like the bravest, as with Johnny Hoogerland, who was rammed into barbed wire by a car in last year’s Tour; he still finished the race) and the best overall team. If you watch the broadcast, Phil Liggett and Paul Sherwen, one of the best commentator teams in all of televised sport, will explain all this to you again. The race begins June 30.

This year’s course promises to be horrible, as they always are. Early Tours actually circumnavigated France; modern Tours provide 20 stages in especially scenic areas, sometimes separated by hundreds of miles. This year’s course features a punishing series of climbs in a total of nine mountain stages: four “medium” mountains, which are only grueling, and five “high” mountains, which demand Olympian skill, in both the sporting and supernatural sense.

Peter Sagan (Liquigas-Cannondale; Authentic Euro pronunciation is “Leaky-Gas,”; it seems that the NBC producers have encouraged commentators, particularly the effervescent Bob Roll, to pronounce it “likwee-gas” instead)

I remember Peter Sagan dueling the experienced Italian cyclist Damiano Cunego in a long, high-speed mountain descent in the Tour de Suisse last year. Sagan distinguished himself as a cyclist worth watching then, and another year of pro competition has confirmed the impression. Sagan rode a brilliant tour of California and an even better Tour de Suisse, racking up nine stage wins between the two races. Sagan showed himself to be a strategic, subtle sprinter, riding craftily and quietly into an optimal position in the bunch and then darting forward at the last minute to take the stage—this is remarkable technique for a 22-year-old. No one expects him to win the GC, but it will certainly be worth watching him match wits and sinews with the greatest sprinters in the world in the Tour.

Adorable Manx sprinter Mark Cavendish finally won a stage race, the Ster ZLM Toer in the Netherlands, so he should be riding high as he enters the real Tour. Cavendish is an explosive, powerful sprinter, and the cycling media is already asking what will happen when he and Peter Sagan cross swords. Cavendish’s style, which is quite different from Sagan’s, is to blast past the competition and win by yards. Supposedly Cavendish will hold back in the Tour to keep his legs fresh for the Olympics. I’ll believe that when I see it. Betting enthusiasts might want to place wagers on how many times Cav will cry on television this year.

Ethereal Luxembourger Fränk Schleck will ride in the Tour without his younger brother Andy (see them together here, vandalizing a car for some reason). Schleck’s team is promoting him as a GC contender, but after a mediocre Tour of California and second place in the Tour de Suisse I don’t see it happening. Fränk is a good all-rounder and a fan favorite, but he seems wistful and unfocused this year.

The charisma-free Aussie with the mysterious chin dimple won last year’s Tour and would certainly like to do it again. Watch for him to brandish a baby during interviews.

Farrar, an American who looks like he is on a semester break from Bowdoin, has gotten better and better since abandoning his first Tour in 2010. Yet another world-class sprinter, the announcers played up a Farrar-Cavendish rivalry last year. It never really materialized, but Farrar won a stage in great style in last year’s Tour. If he wins again this year you may see him flash a W with his hands—this is for his friend and teammate Wouter Weylandt, who died in an accident in 2011.

One of Lance Armstrong’s old teammates, Levi Leipheimer would really, really like to win a Tour de France. He’s been racing since 1995, which is a long time for the pro peloton, and he has suffered various horrible injuries this season. His omega-quickstep team features some heads of state of the pro peloton: Sylvain Chavenel, Peter Velits, and Jerome Pineau. Leipheimer is a grim, dogged competitor, and has the experience needed to ride a very smart race, but it’s not clear is his legs are up to a GC win.

The first Portuguese rider to win the Tour de Suisse, Costa and his team rode extraordinarily well in the Alps earlier this month. He may not be a serious contender for the Tour de France yellow jersey, but he and his mates might take quite a few stages. Costa is more determined and cunning than spectacular.

Nicknamed “Fabu,” this ultra-handsome Swiss cyclist does well in the climbs and sprints, and he’s a superb time trialist. He’s had a relatively quiet season so far, and he may be favoring the Olympics over the tour.

My personal favorite, ten Dam is a quiet Dutch domestique for the always powerful Rabobank squad. No one thinks he will be a serious contender in the Tour, but he has a weird karma with the race cameras—he shows up all the time, and he always looked absolutely ragged. Even when he starts the race looking presentable he develops a Chaplin-esque tramp beard by mile 10. In the Tour de Suisse the cameras seemed to focus on images of ten Dam drooling or blowing his nose; in the Tour of California he resembled an Okie. A heroic climber, he finished well in the GC of both races.

Andy Schleck, who looks like a Rivendell extra from Lord of the Rings, broke his pelvis in the Criterium du Dauphiné this year and will not ride the Tour. Andy is a perpetual pro peloton favorite and gives charming interviews. He climbs better than almost anyone, and would have had a good chance of winning the GC, especially with help from his brother Fränk . He won the 2010 Tour retroactively when Alberto Contador lost the title to doping.

It’s looking more and more like Lance will be doing his racing from jail—the US Anti-Doping Agency has mounted an increasingly savage attack on the face of American cycling, who rode his last Tour in 2010. The announcers don’t even mention him any more.

Banned for two years for doping; the Professor Moriarty of the cycling world. Everyone hates Contador but everyone loves watching him.

No, wait, American Chris Horner is back on the RadioShack Tour squad and will compete this summer. Horner is an extremely tough cycling veteran, an American, and has been snubbed and jerked around by Radio Shack for reasons beyond my comprehension.

Dreamy Dane Jakob Fuglsang, who has to wear a special helmet to account for his thick, girlish eyelashes, has been bumped from the Radio Shack Tour squad and is reportedly looking for a new organization.

Powerful Norwegian sprinter Hushovd rivals and occasionally beats Mark Cavendish. He dropped out of the Giro D’Italia and will skip the Tour this year because of a “viral infection,” which sounds awful, though probably less taxing than actually riding the Tour in good health.