When It Comes to the Giants, Look to the Outfield

Now if only Tim Lincecum can pull it together. 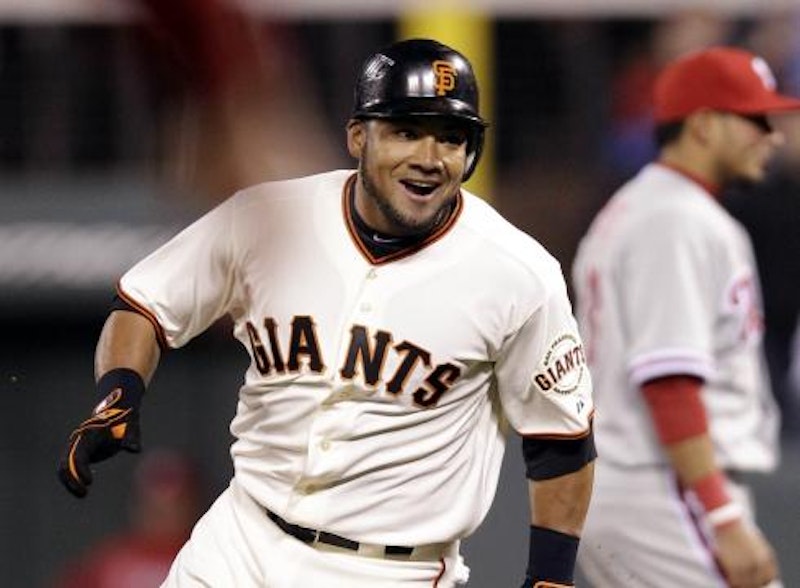 The San Francisco Giants suffered through a disappointing 2011 season in an attempt to repeat as World Series Champions. The team pitched well enough to win 86 games but struggled to score runs and finished eight games behind the division leader Diamondbacks. The Giants scored a National League low 570 runs and didn't add much in the way of offensive upgrades over the winter, bypassing pricey free agent sluggers and instead investing $127 million to keep starting pitcher Matt Cain in San Francisco through 2017.

San Francisco currently sits just one game back of the National League West leading Dodgers. The Dodgers have benefitted from uncharacteristic pitching performances from Aaron Harang and Chris Capuano. If the Dodgers falter the Giants are in position to take control of the division. Cain has been outstanding and is a prime Cy Young candidate. San Francisco's pitching has been the backbone of the team once again despite the continued struggles of two-time Cy Young winner Tim Lincecum. Barry Zito has rebounded from a disastrous 2011 to turn in 15 solid starts.

The real surprise for the Giants has been the emergence of veteran outfielder Melky Cabrera, obtained over the winter from the Royals for lefty starter Jonathan Sanchez. Kansas City believed that prospect Lorenzo Cain was ready to take over center field duties and the Giants had a surplus of pitching. Sanchez and Cain have been awful in Kansas City while Cabrera has flourished for the Giants.

It seems like Cabrera has been around forever. He debuted with the Yankees as a 20-year-old in 2005. It's easy to forget that he is still just 27 and has yet to reach free agency. In 71 games—as of June 26—for the Giants this season Cabrera has scored 51 runs, posted a .898 OPS and slashed a National League-leading 104 hits. He’s emerged as the best offensive player on the offensively challenged Giants.

Cabrera is supported in the San Francisco lineup by fellow outfielders Gregor Blanco and Angel Pagan. Blanco, 28, has bounced around the Majors for several seasons. He logged time in Atlanta and Kansas City before establishing himself as a valuable contributor with the Giants this season. Blanco isn't wowing spectators but he's contributed to the San Francisco attack with a .352 on base percentage and 37 runs scored in 64 games. Pagan was acquired from the Mets over the winter for Andres Torres. The Giants have been the clear winners of the swap of disappointing outfielders. Torres is hitting just .213 in 51 games with the Mets. Pagan is hitting .299 with 36 runs and 12 steals for San Francisco.

The steady performance of Cabrera, Pagan, and Blanco, coupled with Buster Posey's healthy return has provided the Giants with enough offense to once again contend for the N.L. West division leader. The Giants have overcome Lincecum's ineffectiveness, the anxiety issues of the currently disabled Aubrey Huff, and an injury to slugging third baseman Pablo Sandoval. The recent return of Sandoval to the lineup, and a hot streak from Brandon Belt, are positive signs for the Giants. If Lincecum can overcome his struggles this season the Giants could once again ride a world class pitching staff to October glory.