The Nats Are Baseball's Most Exciting Team

Thanks to some amazing young talent. 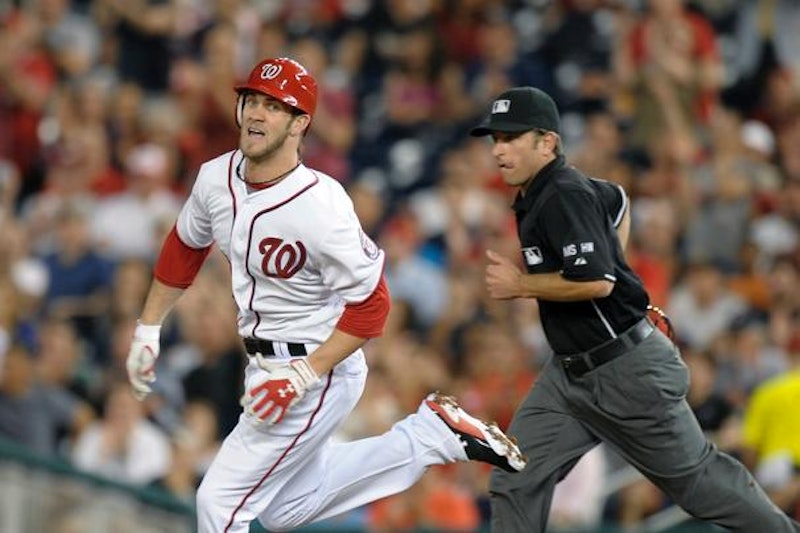 The Washington Nationals were a chic pick to take a step forward in 2012. The team finished 80-81 last season, and featured a young starting staff built around Stephen Strasburg. The promise of Bryce Harper’s arrival coupled with the trade for Gio Gonzalez led to talk of the Nats contending for a Wild Card spot. The Nationals, Strasburg and Harper haven’t disappointed fans or pundits.

The Nationals have quickly developed into one of baseball’s most watchable teams. Over the past few seasons I’ve watched a lot of Nats games. The Orioles would usually fall behind early leading me to flip over to the other MASN in search of some better baseball. Now both the Orioles and Nationals are leading their respective divisions. The 2012 season, at least for me, has been a welcome surprise.

The Nationals have seemingly made all the right moves. Some criticized the trade for Gonzalez, but the 26-year-old lefty has been filthy. In six starts for the Nats Gonzalez is 3-1 with a 1.72 ERA, 0.90 WHIP, and 41 strikeouts in 36.2 innings. Gonzalez has yet to allow a home run. The price to acquire Gonzalez was steep, four highly regarded prospects, but to this point he’s been worth the cost.

Washington also signed right-hander Edwin Jackson as a free agent. Jackson, a Scott Boras client, was seeking a multi-year deal before agreeing to a one-year contract with Washington for $11 million. Jackson hasn’t been as dominant as Gonzalez, but he’s pitched well. In five starts he’s posted a 3.69 ERA, 1.10 WHIP, and already tossed a complete game. The well-traveled Jackson has logged at least 199.2 innings in each of the past three seasons. The otherworldly Strasburg could be shut down late in the season due to an innings cap. In that case Jackson could serve as a horse down the stretch as the Nats make a run for the postseason.

Washington has made its early season run without several key contributors. The team is missing third baseman Ryan Zimmerman, closer Drew Storen, and left fielder Mike Morse. Steve Lombardozzi has filled in admirably at third for Zimmerman; Henry Rodriguez has logged six saves and a 1.50 ERA in Storen’s absence; and Rick Ankiel and Harper have done their best to replace the slugging Morse. The Nationals now must find a replacement for right fielder Jayson Werth who broke his wrist attempting to make a sliding catch on Sunday night.

Harper’s a joy to watch. Tales of the 19-year-old’s cockiness and attitude preceded his arrival in the big leagues. After a week and a half, my only complaint is that awful haircut of his. He’s an incredible talent who plays the game hard at all times. Harper runs out every ball, is mechanically and fundamentally sound, and has displayed incredible patience at the plate. Phillies’ lefty Cole Hamels plunked Harper with a pitch in the small of his back on Sunday night, an attack that was unprovoked and bush league. Harper didn’t respond like a petulant teenager or spoiled bonus baby. He simply took his base, worked his way to third on a single, and stole home. Eat that Cole Hamels!

If you’re a fan of good baseball, and some incredible young talent, then the Washington Nationals deserve your viewing attention. They might be the best team in the National League, and that’s without Zimmerman, Morse, and Storen. The Phillies’ stranglehold on the NL East is in great danger. Harper, Strasburg and Gonzalez are going to be around for a while.