Cole Hamels: Why'd You Do It?

This aggression will not stand. 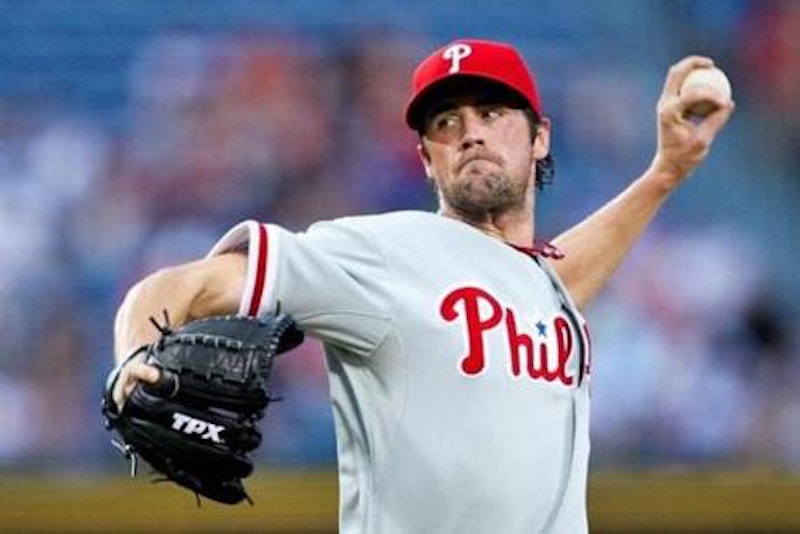 Last Sunday, as baseball fans know, Phillies’ ace Cole Hamels hit Nationals outfielder Bryce Harper in the lower back with a 92 m.p.h. fastball. It was the first pitch of the inning, a fastball right at Harper from a guy who is having no problems locating any of his pitches this year (1.3 BB/9) and has become wealthy by putting his pitches exactly where he wants them. What’s more, it was in the exact spot that you hit someone if you’re trying to hit someone. So it looked suspicious from the beginning.

You can’t jump to conclusions about these things. Hamels deserved the benefit of the doubt. You never know. Sometimes pitches can slip out of the hand of any pitcher, no matter how good, and sometimes… wait, what? He admitted doing it on purpose?

Nope. Clearly, Hamels isn’t denying it. Denying it would be more like, “No, I uh, I don’t know what you’re talking about [ducks into back alley].” But Hamels said, “Hey everyone! Look here! It was me!” So denying it is not what he is doing. He was proud of it.

“That’s just—you know what, it’s something that I grew up watching, that’s what happened, so I’m just trying to continue the old baseball—I think some people kind of get away from it. I remember when I was a rookie the strike zone was really, really small and you didn’t say anything just because that’s the way baseball is. Sometimes the league is protecting certain players and making it not that old-school, prestigious way of baseball.” (All quotes from Adam Kilgore at The Washington Post.)

Hamels’ answer boils down to “I hit him because 30 years ago when I was a bloodless zygote floating along in my amniotic sac, pitchers threw at hitters more often than today and I’d like to revive that tradition because traditions are traditional.” It sounds like something Jose Canseco would say when asked why he agreed to dress up in a Tony the Tiger costume and get pelted with fish carcasses until he passes out on pay-per-view. Far from providing an answer it succeeded only in raising more questions.

The oddest part of this unprovoked aggression might be that Hamels has been in the league for seven seasons and this is the first anyone has heard of his love of violent and random tradition. I hope that after giving up a home run he doesn’t challenge the hitter to a duel. That would limit his long-term contract potential this off-season.

But mostly, as the ultimate in red tape irony, MLB had to suspend Hamels, not for throwing at someone on purpose so much as for admitting that he threw at someone on purpose. Because, as all adults know, the real crime is admitting you did something wrong. Now Hamels is the poster-boy for doing dumb stuff for no good reason. He’s still going to be filthy rich when the season ends and hits free agency, but he may have shrunk the pool of potential suitors by one big one, and even after all this, it’s still unclear why.