In the Shadow of a God

There will never be another Ray Lewis. 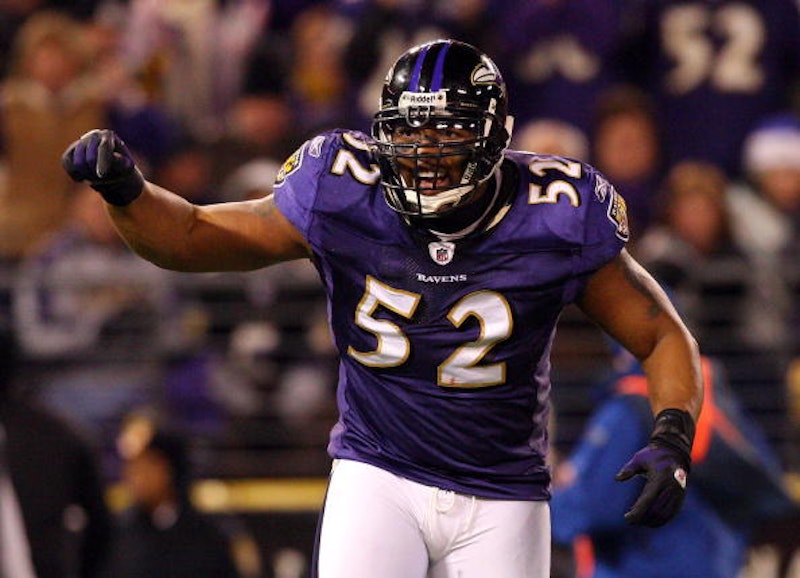 The Baltimore Ravens were repeatedly linked to University of Alabama linebacker Dont'a Hightower in the days leading up to last week's NFL draft. The conventional line of thinking went that Hightower was a highly regarded middle linebacker and the Ravens were looking for an heir apparent to Ray Lewis. The Ravens had the 29th selection in the first round.

Hightower ended up going to the Patriots at 25. New England traded up to select Hightower. Conventional thinking apparently had it all wrong. The second-guessing commenced. Did the Pats dupe the Ravens? Why didn't Ozzie Newsome trade up to select Hightower? Who would play middle linebacker after Ray's retirement?

Around these parts Ray Lewis is generally regarded as the greatest middle linebacker of all time. Surely the Ravens wouldn't be so fortunate as to have his successor simply drop into their laps at the end of the first round. We don't even know if the Ravens viewed Hightower as an eventual successor to Lewis. Can there really be an heir apparent to a force of nature like Lewis?

What we do know is that the Ravens either didn't value Hightower, or the middle linebacker position, enough to deal multiple picks to move up in the draft.  The Ravens suffered several free agent losses, but middle linebacker wasn't one of them. For all those fans worried about who will take Lewis' place when he finally calls it quits, chill out. There is no "next Ray Lewis.” The biggest void created by Lewis’ eventual retirement will be leadership, not tackling. Terrell Suggs is signed long term and has taken on a more vocal role in recent seasons. Suggs is Lewis' eventual successor as the leader of the Ravens' defense. The void at middle linebacker will be filled by a free agent or draft pick when the time comes. Last I checked Lewis was still going strong, even at 36.

Ravens inside linebacker Jameel McClain is not the next Lewis, but he does play alongside the original. McClain is a solid player and recently re-signed with Baltimore for three years and $10.5 million. McClain is just the latest in a long line of millionaires who can thank Lewis for their financial windfall.

Lewis is the NFL's version of Powerball. If you are lucky enough to coach or play alongside him you'll probably end up a very rich man. Former Ravens' defensive coordinator Marvin Lewis was the first beneficiary as he parlayed his stint at Ray's boss into a lucrative deal with the Redskins and a head coaching position with the Bengals. Coaches Jack Del Rio and Mike Singletary left Baltimore only to become head coaches in Jacksonville and San Francisco. In fact, Singletary replaced former Ravens' defensive coordinator Mike Nolan as the 49ers head coach. Atlanta head coach Mike Smith was a onetime Ravens' defensive assistant. Rex Ryan served as the Ravens’ defensive coordinator before taking his playbook and poor judgment to the Jets. Former Ravens Ed Hartwell, Adalius Thomas and Bart Scott all left Baltimore for big money elsewhere but never duplicated the success they had with Lewis by their side. New Colts' coach Chuck Pagano and outside linebacker Jarret Johnson are the latest winners of RayRay's MegaMillions.

There is no "next Ray Lewis." The original article will have to do. His exploits will live forever in the hearts of Ravens fans and the bank accounts of his brethren.