1968: A Turning Point in Baseball History

An interview with author Tim Wendel. 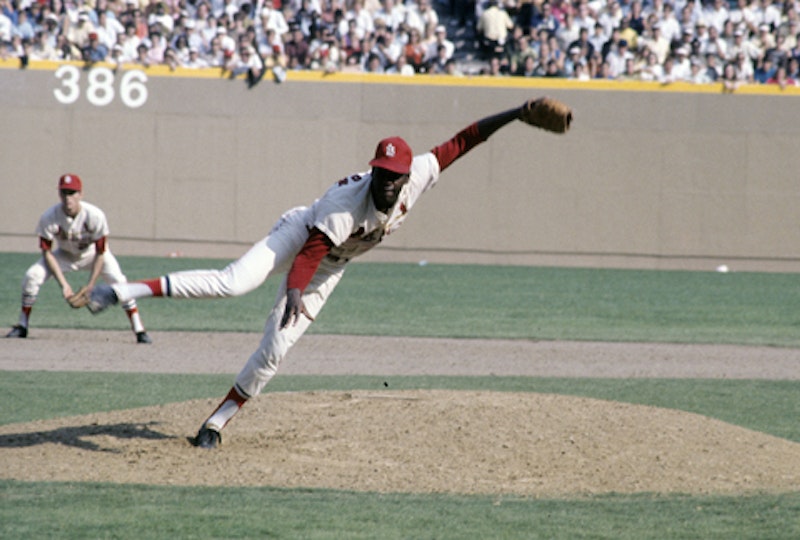 The last year before Major League Baseball first switched to a division format—splitting the National and American Leagues into two—1968 is often remembered as “The Year of the Pitcher,” when Denny McClain won 31 games, Bob Gibson compiled an astonishing ERA of 1.12 and Carl Yastrzemski captured the A.L. batting title by hitting just .301. Yet, as Tim Wendel artfully explains in his new book Summer of ’68 (Da Capo), it wasn’t just an unusual season: the political turmoil in the country overshadowed the game, leaving baseball players, like most Americans, confused by events spiraling out of control. The assassinations of Martin Luther King Jr. and Bobby Kennedy, riots in major cities, the tumultuous Democratic Convention in Chicago and escalating student unrest and anti-war protests mocked the long-held notion of baseball as the quiet and leisurely national pastime.

Wendel, author of nine books, a writing teacher at Johns Hopkins University and well-known sports journalist, focuses on the Detroit Tigers and St. Louis Cardinals—who’d meet for a seven-game World Series—and runs through the April-October season, with frequent digressions on national and international news. Summer of ’68 is a splendid, cross-generational book that can satisfy not only the duffers who remember that year like it was yesterday, but also young and inquisitive baseball fans and history students. The following interview was conducted with Wendel by email last week.


Splice Today: You grew up in Lockport, NY, where, I imagine in the 1960s, there weren’t a lot of televised baseball games. As you’re obviously a baseball fan, what team first captured your loyalty? And who do you root for today?

Tim Wendel: Of course, there weren’t a lot of games on TV back when I was a kid, so being a fan meant studying the box scores, pulling in games on the radio. I grew up a Red Sox fan because that was the name of my Little League team. Until recently I was going to hunt down whoever put me on that team because they almost cursed me for life. Thank God it wasn’t the Cubs. I still follow the Red Sox, but due to my proximity to the Canadian border growing up I started to follow the Blue Jays, too. These days I’m warming up to Washington Nationals as my new hometown team.

ST: We’re roughly the same age, and I’m wondering, given your fascination with both sports and politics, what raced through your inquisitive 12-year-old mind in 1968. Before the tragic events of June in Los Angeles, were you a Kennedy or McCarthy supporter?

TW: I was initially a McCarthy supporter. As much as one can get into such things at the age of 11 or 12. But I certainly enjoyed Bobby Kennedy’s speeches. Often he spoke from the heart when people needed to hear such honesty and passion. In fact, I believe his speech of April 4, 1968, when he tells the crowd in Indianapolis that Martin Luther King has been shot and killed is one of the most heartfelt, effective speeches ever given. As I detail in Summer of ‘68, Indianapolis didn’t riot that evening, thanks largely to Kennedy’s words.

ST: Although there are numerous passages in Summer of ’68 that are so sobering they bear re-reading, one of the most affecting was the recollection of 22-year-old Houston Astros pitcher Larry Dierker. Watching the Democratic Convention riots in Chicago from a Hilton hotel room, Dierker, a National Guardsman, was horrified at what he saw. He admits that like so many other young men, he didn’t want to go to Vietnam; watching Mayor Daley’s hooligan cops smash people at will, Dierker says that on that night “[He] wasn’t proud” that others fought while he played ball. Do you think many other Major Leaguers of that age actually thought about the war and had similar conflicts?

TW: Baseball players in 1968 were like most people: They wanted to be left alone and move on with their lives. But 1968 was so turbulent that almost everybody was impacted in some way. Some ballplayers, such as Mickey Lolich and Nolan Ryan, were members of the National Guard. The war and the riots were constantly a part of the American landscape. The question became how were you going to respond to all of this, how were you going to persevere?

ST: Curt Flood, the Cardinals’ star center fielder in ’68, of course went on to challenge baseball’s inexplicable (at least from a modern standpoint) antitrust exemption. He lost his battle, ultimately at the Supreme Court, and was essentially finished as a player. As both Marvin Miller and Bob Gibson said, today’s Major Leaguers give scant credit to Flood—if they even know who he was—even though his battle was instrumental in making even utility players millionaires. I suppose there are exceptions, but on the whole athletes appear willfully ignorant of their predecessors. Do you think Flood (or Miller, for that matter) will ever receive his due, although posthumously, as a baseball pioneer?

TW: Those that know baseball history realize how important Curt Flood and Marvin Miller were. I believe both deserve to be in the Hall of Fame. And if we don’t remember our history then we’re often doomed to repeat it, right? My editor sent me a recent headline from New York magazine that simply read, “2012=1968?” Many of the same issues that took place in 1968—culture wars, political discord—we’re still trying to sort out today.

ST: A large part of your book’s premise is that 1968 was the last year of baseball truly being the country’s national pastime. While I agree that football took over, partly because of marketing, partly because of the quicker pace, and the next two decades put baseball on the back burner, how do you square the vast discrepancy of attendance figures of today in MLB ballparks (generally much higher) with the notion that the sport no longer commands the same amount of attention. For example, I remember as a kid going to Yankee Stadium and buying decent walk-up tickets; today, the Stadium’s usually jam-packed, with prices to match. Granted, no one’s making money in Tampa Bay, but on the whole, MLB is on an entirely different financial scale.

TW: Certainly in terms of overall attendance, it’s difficult to do better than Major League Baseball. But so much of who is number one has to do with perception, and football rules the TV and sports talk worlds. I couldn’t believe how much attention the recent NFL draft received. And this was going on with games being played in baseball, and playoffs in hockey and about to begin in the basketball.

ST: Do you remember watching the ’68 series, or listening to the games on a transistor radio? I assume so, and if that’s the case, did you have a favorite?

TW: I remember watching Game 7. I remember the ball going over Curt Flood’s head that brought in the decisive runs. But I also remember Lolich jumping into the arms of his catcher, Bill Freehan, when the last out was recorded. Much of the fun of doing Summer of ‘68 was dusting those memories off, making them come alive so I could write about them. So when Lolich told me why he jumped into Freehan’s arms (to assure that Freehan didn’t jump into his arms) the scenes worked on several levels for me. I had my distant memories and now this fresh detail and insight. That was a lot of fun.

ST: Players today seem to incur far more injuries than 40 years ago. It could be, absent the access we have today to every minor move a franchise makes, there were just as many injuries and we just never heard of the guys who blew out their arms. Or, do you think that owners/general managers “baby” the players so much because of the vast sums of money involved?

TW: There’s certainly a sense that organizations “baby” their young pitchers. But that’s perhaps to be expected with so much money at stake in terms of development and player bonuses. The pendulum may be swinging back, though. I like how Nolan Ryan, now as one of the top guys in Texas, has ruled out pitch counts throughout the Rangers’ farm system.

ST: What do you think Bob Gibson would make of the sabermetrics crowd today? I get the feeling that if he saw an analyst like Keith Law or Rob Neyer (both of whom I enjoy reading) on a ballfield, that he’d throw a little chin music their way. Perhaps that’s romantic, but I’d like to think it’s true.

TW: Bob Gibson’s approach has always been let’s get down to business. What needs to be done to be successful here? A lot of discussion isn’t his way necessarily. Remember when Joe Torre named Gibson as one of his coaches he wasn’t a pitching coach or bullpen coach. Instead Torre named him the team’s “attitude” coach.

ST: Do you think the next generation of baseball fans will bring a more analytical background to the game, or is a fan just a fan?

TW: I’m not sure what the next generation will bring to the game. It’s funny how it can slide from one camp to another. I was never a big one for numbers (perhaps it’s because I barely passed algebra in high school). I always enjoyed the stories, even the background of players. The great thing about baseball is there’s room for all of us.

ST: You currently teach writing at Johns Hopkins, and I’m betting, even though you live in Virginia, that you catch a few games at Camden Yards. I was an undergraduate at JHU when the Orioles were a great team, and sold beer and hot dogs at the old Memorial Stadium in the mid-70s. Now, the team is a disgrace. Why has this proud franchise—and I don’t believe everything can blamed on owner Peter Angelos—made so little progress in re-building since their last winning season in ’97. What would you recommend?

TW: When it comes to the Orioles, I think we’re beginning to see what kind of impact a good manager can have. They trust in Buck Showalter in Baltimore and it’s starting to pay off.

ST: Quickies: favorite ballplayer of all time? Current player? And who will have the better career, Bryce Harper or Mike Trout?

TW: I about cried when Paul Molitor and Dennis Eckersley retired because they were not only great players, but they also went out of their way to make sure those of us in the press knew what was going on. For example, Molitor kept me up to speed of events during the work stoppage in 1994, while Eckersley always spoke, win or lose. I miss those guys. These days I’m having some fun watching Bryce Harper run out everything in sight. It’s kind of refreshing, and I think the old Tigers and Cardinals in the Summer of ‘68 would appreciate such hustle.