Baseball's Next Wave of Fantasy Stars

Get your roster's ready. 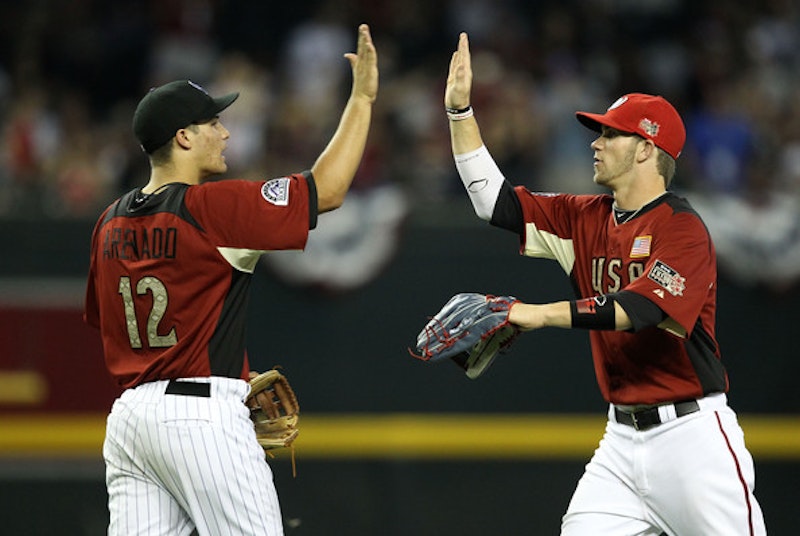 Bryce Harper and Mike Trout, baseball’s top two position prospects, were recently recalled from the minor leagues, and the respective announcements from the Angels and Nationals sent fantasy baseball owners scrambling for their smart phones, iPads, and laptops in an attempt to add baseball’s next big thing to their roster. Harper and Trout are both considered five tool players who could be the cornerstones of fantasy squads for years to come. If you were late to the waiver wire and missed out on Harper and Trout don’t fret. There are some other young sluggers just waiting for their chance at big league stardom.
Wil Myers, Kansas City Royals

The Royals drafted Myers in the third round of the 2009 amateur draft. Myers has risen steadily through the Kansas City system and has spent the early part of the 2012 season punishing Southern League pitching. In 29 games for the Northwest Arkansas Naturals Myers has clubbed 11 home runs and knocked in 24. Myers also has four stolen bases and 27 runs scored. The 21-year-old sports a .339 batting average and a whopping 1.115 OPS. If there is one downside to Myers game it’s his 36 strikeouts in 115 at bats. Given the Royals dreadful start there’s no rush to bring Myers to the big leagues. If the Royals do decide to promote Myers to the big club this summer be sure to snatch him up in your leagues.
Nolan Arenado, Colorado Rockies

The Colorado Rockies are currently employing the underwhelming duo of Chris Nelson and Jonathan Herrera at third base. Those two are just keeping the situation warm for Nolan Arenado. Arenado, 21, was Colorado’s second round draft pick in June 2009. He is the Rockies’ third baseman of the future. The future could come as soon as this summer. Arenado hit 20 home runs and knocked in 122 runs in the Single-A California League last season. His strong performance earned him a spot in the Arizona Fall League. Arenado mashed in Arizona finishing the month long season with a .388 batting average, six home runs, and 33 RBI. He is currently playing in Double-A for the Southern League’s Tulsa Drillers. Arenado is off to slow start, by his own lofty standards, with just one home run and a .779 OPS in 32 games. Given Colorado’s current woes at the hot corner it’s possible that we’ll see Arenado in a Rockies’ uniform before the end of June.
Anthony Rizzo, Chicago Cubs

Rizzo has been talked about in prospect circles for years. He’s already been traded twice in the past two seasons, first from Boston to San Diego, then from San Diego to the Cubs. He’s currently playing first base for the Iowa Cubs and terrorizing Pacific Coast League pitching staffs. The 22-year-old Rizzo has nine home runs, 31 RBI, and a 1.056 OPS in 30 games. Chicago currently has Bryan LaHair manning first base and launching balls to the far reaches of Wrigleyville. Rizzo looks to be a key component of the Cubs’ rebuilding project but there is no timetable for his arrival in Chicago.
Will Middlebrooks, Boston Red Sox

Unlike Rizzo, who’s blocked from reaching the big leagues, Middlebrooks’ opportunity was created by an injury to Red Sox third baseman Kevin Youkilis. Middlebrooks began the 2012 season at Triple-A Pawtucket where he hit nine homers and drove in 27 in 24 games. His early season success earned him a trip to Boston when Youkilis landed on the disabled list. Middlebrooks hasn’t stopped hitting since reaching the Major Leagues last week. He’s only played six games for the Red Sox but he’s already hit three home runs and knocked in nine. Youkilis is expected to return from the disabled list soon, but BoSox skipper Bobby Valentine may need to find a way to keep his newfound slugger in the lineup. With Carl Crawford and Jacoby Ellsbury on the disabled list we may see Middlebrooks soon manning the outfield at Fenway Park. If he’s still available in your fantasy leagues pounce on him.