In this Baltimore snafu, O’s owner Peter Angelos is, somehow, the good guy. 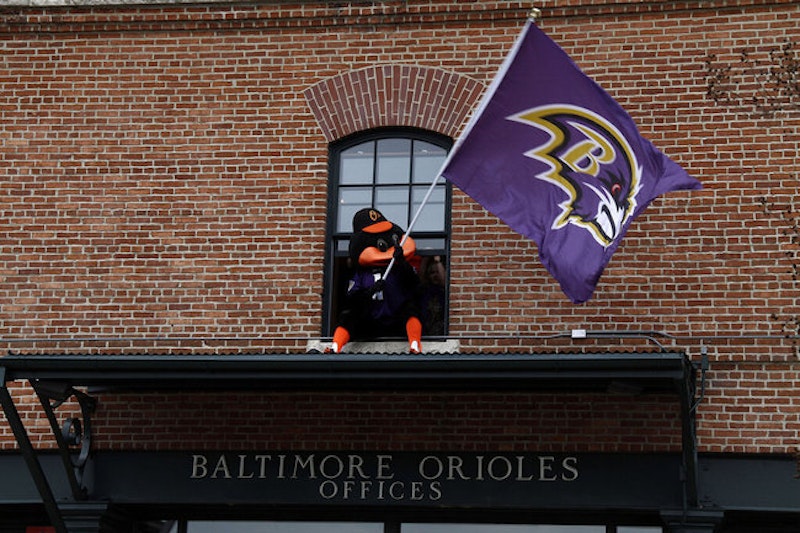 The Baltimore airwaves, and the social media accounts of local sports fans, were abuzz on Monday when the NFL leaked a report that the Orioles were resisting the league's attempts to reschedule their Thursday, September 5 game against the White Sox. The Ravens, as defending champions, have the honor of hosting the first game of the NFL season that happens to be the same night. Too bad the Major League Baseball schedule was announced six months ago.

Roger Goodell and his NFL minions would like you to think that this is the Orioles problem, and that Orioles' owner Peter Angelos is the grumpy old troll whose jealousy over the Ravens' popularity is clouding his judgment. Goodell is wrong, as he's been so often since taking office as NFL commissioner. The scheduling controversy is the NFL's problem and entirely of their making. The league has been aware of the MLB schedule, and any potential conflicts, for months. Angelos' largely unpopular reign as O's owner makes him an easy scapegoat for the high flying Ravens but it doesn't make him guilty. Angelos may be many things but he isn't a pushover… just ask MLB and the Washington Nationals how much fun it is to negotiate with Angelos. Goodell may have picked the wrong fight with the wrong guy this time.

The Orioles don't have the ability to unilaterally change the time of a game. They must get the permission of MLB, the White Sox, and the Major League Baseball Player's Association. Good luck getting all three. Even if MLB agreed to reschedule the game, which they have no reason and are under no obligation to do, it's laughable to think that the White Sox would agree to reschedule. Chicago has only two scheduled off days between the All Star break and the September 5 contest in Baltimore. You'd have better luck getting them to wear Cubs uniforms than to play an afternoon game in Baltimore after a night game in New York just to accommodate the celebration of a team they don't know from a city they don't care about.

Even if the White Sox, MLB, and the players agreed to move the game to the afternoon there's little motivation for the Orioles to do so. Yes, the Orioles' futility over the past two decades coupled with the Ravens' success has left the football team as Baltimore's favorite sons but the Orioles did make the playoffs last season and have most of their roster returning. The Orioles plan on being in a pennant race in early September and Baltimore fans should have the same expectation. The Orioles are set to play a night game in Cleveland on September 4. Even if the game in Cleveland ends at a reasonable hour the Orioles would arrive in Baltimore in the wee hours of the morning. A day game on Thursday is major inconvenience that late in the baseball season and could wreak havoc on the team’s bullpen. What's more important; celebrating a championship already won with concert by Train at Power Plant Live! and a pre-game flyover, or inconveniencing a team with pennant hopes of their own?

Goodell poured it on pretty thick on Monday, even suggesting that he grew up rooting for the Orioles and that the Orioles and Ravens playing back-to-back games on Thursday would be a great thing for Baltimore fans. You’re right, Roger, it’d be awesome and that’s why the simple solution here is for the Ravens to simply play the game on Sunday night. The Orioles and White Sox don't need to be inconvenienced, and the Ravens still get to bask in the National spotlight of a primetime showcase. Everyone's happy right? No, the imperious Goodell has other plans for Sunday night and doesn't care whom he has to inconvenience (Baltimore fans, MLB, Orioles, White Sox, etc.) to make it happen. Do you think the NFL would swap game times if the shoe were on the other foot?

The silence of Ravens' owner Steve Bisciotti on this issue is deafening. Rather than allow the NFL to make the other big league franchise in town into whipping boys Bisciotti should pull up his big boy pants and do the right thing by publicly stating that the Ravens' preference is to host the first Sunday night game of the season. If that's not the Ravens’ preference then shame on them.

The Orioles aren’t at fault for this scheduling issue and shouldn’t be expected to put themselves at a competitive disadvantage to fix it. The NFL has viable alternatives (Tuesday, Wednesday, Sunday) but has refused to do the right thing because being a bully is so much easier.