The Ancestral Rite of Skiing

My wife’s grandmother carved out trails. 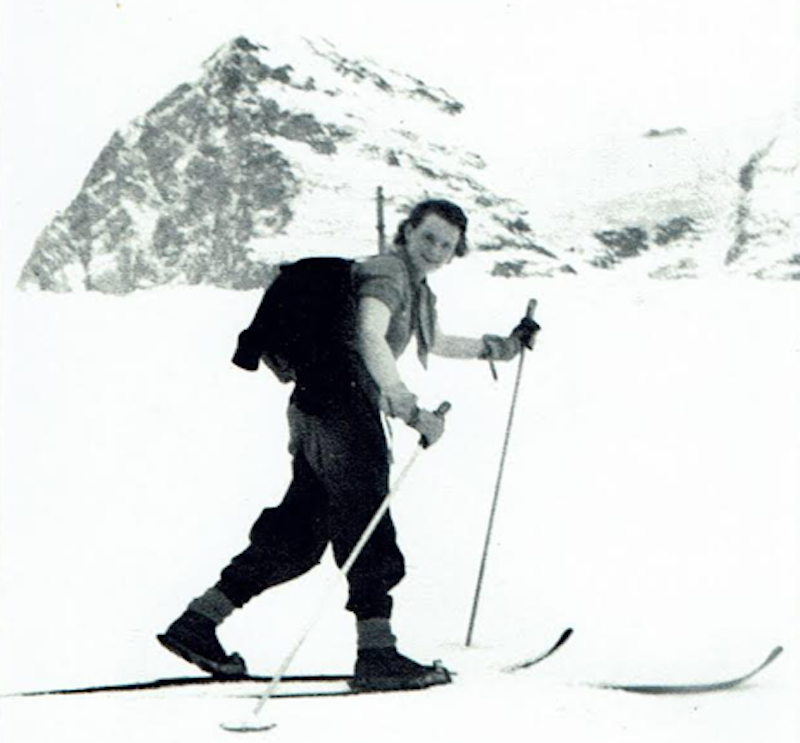 Skiing runs in my wife’s family. Around 1935, her grandparents, along with friends, set up a tow line to bring skiers up a hill south of Buffalo, powered by the battery of a 1932 Buick. “I’m pretty sure it was the first ski lift in Western New York,” Nan Russell Carter, or Granny, told a Buffalo newspaper in 1976. In 1936, Nan and James Carter got married, and went off on a ski honeymoon in the Alps. Photos show them smiling on a glacier; she carries the backpack.

Nan, born in 1913 and formally named Anne, came from a family of doctors, bankers and politicians; the latter included her great-great-grandfather DeWitt Clinton. She went to college and wanted to be a doctor, but her physician father upheld convention: she could be a nurse if she wanted. She didn’t, but in later years, after raising six kids, Nan devoted vast energy to teaching skiing to people who faced obstacles on the slopes: the blind, the disabled, the elderly.

Alpine, or downhill, skiing was catching on in America in the 1930s, with early adopters concentrated in New York and New England. The first Winter Olympics had been in 1924, in Chamonix, France; the first in the U.S. was in 1932 at Lake Placid, N.Y. Émigrés from Austria and elsewhere fleeing Europe’s troubles added to America’s base of skiing knowledge. After the war, U.S. Army 10th Mountain Division veterans who’d fought on skis were prominent in starting resorts, and the sport’s spread to the Mountain West accelerated.

The ski area Nan and Jim Carter helped found, Red Jacket in Eden, N.Y., was run as a club. Families would pay for a season membership, though guests could buy a day pass. Generations of Carters learned to ski there, including my wife Brooke, on skis at age two, and her aunt Anne, who remembers needing an adult to lift the heavy tow rope from the snow. There was a warming shack with a stove under hanging wet mittens. This operation endured into the 1990s, shut by high insurance costs and shortfalls of snow, as snow-making equipment was too pricey.

In the early-1960s, Nan became an instructor at a ski area in Glenwood, N.Y. She’d broken her arm in a November horseback riding accident and wanted something to do. A couple of years later, she met a local girl who was losing her sight, which led to Nan’s involvement in a program to teach skiing to the blind and near-blind. Anne, who helped with some lessons, recalls they’d call out instructions such as “Pick up your right ski and move it to two o’clock. Now do the same with your left.” In time, Nan and Jim rigged up plastic sleds and skis with walkers to expand the program to students with motor disabilities.

The family often took ski vacations to Vermont, and after Jim died, Nan moved into a retirement community in that state. She whimsically told my future wife that if she lived to be 92, she’d like to be put on skis and pushed down the back side of Mad River Glen, a rugged Vermont ski area. As it happened, Nan died at 89 in 2002, and some of her ashes were deposited there near the top of the lift, the rest carried down the slope for a final run.

My wife grew up ski racing, as did many of her relatives; Nan had been doing that back in the late-1930s. After college, Brooke switched to coaching racers on weekends. A few in the family dabbled in ski jumping over the years. Anne goes heli-skiing. Her brother David does ski patrol. For me, growing up in Queens, skiing was like religion: other people did it. It was something William F. Buckley, Jr. wrote essays about, along with piloting and sailing. When I gave skiing a try, in my mid-20s, my first experience was a high-anxiety series of sprawls on an icy Catskills slope. I went a few more times over the next year or two, then gave it up as an expensive activity I wasn’t particularly good at.

When I began dating Brooke in 2005, however, I felt—even without pressure—that I ought to try one of her sporting passions. Skiing or rock climbing? The latter, with its heights and knots, was something I’d want to do only rarely, at a gym. Snowy mountains, though, retained a mystique; and Brooke was driving regularly to New Jersey to coach a racing team.

Skiing’s part of our life now. Our son was on skis at 13 months. We ski mostly in the Eastern U.S., though we went to Banff in the Canadian Rockies a few years ago. The East can’t match the West’s high mountains, but the East’s ice offers a training benefit. In this pandemic winter, we’ve stayed local, skiing at Campgaw, a gentle hill in New Jersey.

When you’ve married into a family of skiers, you’ll likely never catch up from your late start. Best to travel one’s own pace, on the slopes you can handle, improving as best you can. If skiing seems difficult, think how much harder it could’ve been, back when the skis were wooden, few trails had been carved, and a ’32 Buick battery powered your lift.