Above this Xanadu on the Gulf Coast, Springsteen rides. 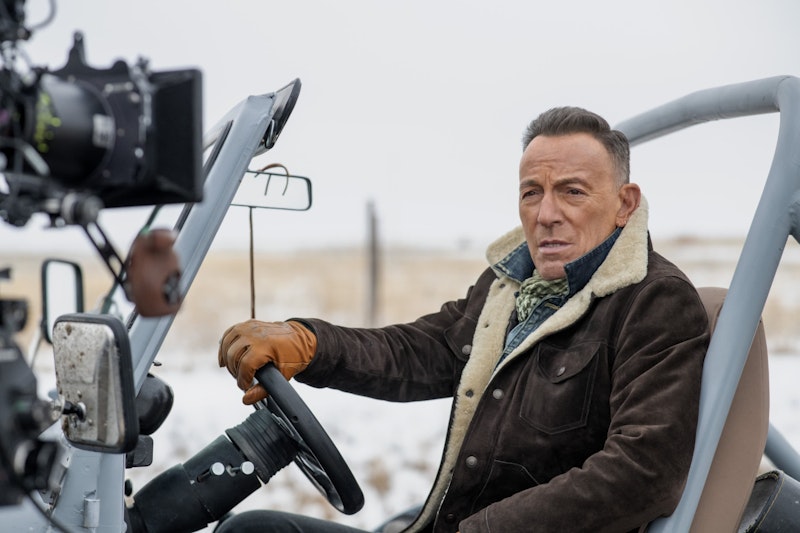 One thousand feet above the sea, the surface looks like Neptune’s pool. Tridents stand at opposite ends of a stadium near Tampa Bay. Above this Xanadu on the Gulf Coast, Mercury races across the port of an airship. Above this tempest of simulated combat is the trail from a blue torpedo with yellow trim. The Goodyear Blimp isn’t in the sky, but its lights outshine all the stars of Super Bowl LV. The lights belong to history, not Bruce Springsteen’s (sans face mask) slow-speed ride from his mansions of glory to his twilight tour of Kansas.

The lights color the night in shades of green and gold, where Jay Gatsby trembles before a courtesy bay of false hope and no redemption, where all other lights—including his starlight of cash and champagne—fade before his orgiastic belief in the future, where he dies in his swimming pool and goes to his grave in a downpour of rain. The rain returns Gatsby to his father, Henry C. Gatz, whose family hails from the Peace Garden State, not the Garden State.

The lights reveal the tragedy of the American dream, unlike Springsteen’s fever dream of clichés on behalf of Jeep. Blatant in his abuse of church and state, he drives with the top down—in the middle of winter—in this two-minute homage to The Middle. He appropriates the icons of our devotion, from the cross to the flag, in his attempt to play Woody Guthrie for a Franco-Italian corporation headquartered in Holland.

He looks how he sounds: staged. The layering of denim and suede, the coupling of leather and cotton, the flame of a match, the flicker of a candle, the image of Calvary on the prairie, the silhouette of Springsteen as Chief of Cavalry—the effect is concussive. His affectations evince signs of multiple concussions, as he stops to journal—he pantomimes note-taking—while a freight train passes. The shots of streets and bridges end in a ribbon of highway, with a red star in the middle of America.

Either the spot is a valentine for Communist China, or an unintentional PSA about CTE.

Either the collision of words and places is a map to nowhere, or Springsteen needs to change the audio settings in Google Maps to avoid a fatal car collision. Lost in his own world, Springsteen gives us a cotton candy sky of myths instead of the sincerity of an outright lie.

Better to frame the scene on a dark blue canvas of sky. Better for a man with a trident-style tattoo, whose surname is a synonym for Big Sky Country, to believe what he sees. Better for Tony Montana (Al Pacino) to see a blimp flash the words (“The World Is Yours”) above a row of palm trees.

Between the vacancy of a plague Springsteen doesn’t acknowledge and his apparent lack of agency, between his sermon on the mount of his vinyl seats and his cover of a preacher’s reference to the mountaintop, between his paean to America and his ignorance of America, he speaks nonsense.

The story of America is in the lights and water of fiction.

From the elusiveness of the green light to the flotsam in Gatsby’s swimming pool, from a garish sun of pink neon to the jetsam of Montana’s corpse in a pool of his own blood, the story repeats itself.

The story has a beginning, middle, and end—without the banalities of The Middle.