The meditative aspects of being on the links alone. 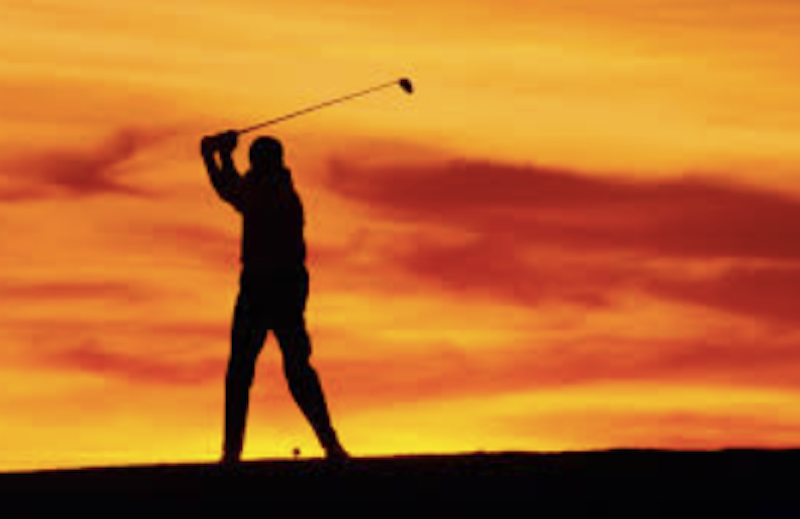 One of the most frustrating aspects of playing golf is that it’s sport's version of a traffic jam—being on the course at a busy time and waiting for the foursome in front of you to advance before you can hit your shot, or having players right behind you and feeling hurried. I probably hate it more than most golfers. Tennis has always been my main game, and I'm used to the game's non-stop action. Standing around on a golf course is torture. The dual solution I've found is to become a "singleton," which is golf lingo for a solo golfer, and to hit the links for "twilight" golf, meaning you go after three p.m. and get a special rate allowing you to play all the holes you can before it gets dark. I get the course almost to myself while other people are home eating dinner.

I've golfed for a long time, and the majority of it's been alone, mostly by circumstance rather than pure preference. If it were easier to find a playing partner at the unpopular time of day I choose to play, the company would often be welcome, especially if it were just one other person. You take what you can get, but the pleasures of solo golf are real.

When I was a younger tennis player, I looked down on golfers as lazy. They weren't even playing a strenuous sport, but still had to ride in carts. So when playing alone, I walk—just the bag strapped over my shoulder like when I was a caddy at the local country club as a teenager. Sometimes I'd carry two bags in those days, when golf bags were much heavier. It was brutal, especially on a hot summer day, but more lucrative.

You might read stories extolling solo golf as an opportunity to "learn about yourself," but I'm staying away from this particular angle. Still, being out there alone on a beautiful, remote golf course as the sun's getting low in the sky and the wind gets still does provide some contemplative moments that conversation could interfere with. By chance, however, I did discover one August day that walking the course as a singleton offered hidden dangers. I was determined to play through 100-degree heat, and kept pushing myself to finish the round as a challenge. But there was little water available, I became dehydrated, overheated, and too weak to continue. By the time I managed to struggle, red-faced and bedraggled, back to the clubhouse, the pro took one look at me and exclaimed, "What the hell happened to you?" I was the only person foolish enough to try to walk the course that day.

I've heard about people listening to podcasts or music while golfing alone, but that's not for me. Solo golf is an opportunity to clear my head. It may not be meditation, but I can put everything aside and be right there in a lovely, natural setting. Putting on the Freakonomics podcast, interesting as it can be, would take me out of this moment. Being alone in nature affords a valuable opportunity to let my thoughts run free. I don't want music either. I prefer to hear the sounds of where I am—maybe it's just the birds and the wind—or just silence.

One of the disadvantages of solo golf people complain about is that you can't enter your score into the official USGA database that determines your handicap. This means nothing to me, as I've never bothered to get a handicap. If there's a key element of golf I don't get, it's handicaps. If I have a 20 handicap and my opponent is a two, I'm supposed to believe I "beat" him because I'm handed strokes? That's silly. Tennis players would never ask for an extra point in each game, so why do golfers?

Golf requires intense concentration. I've played my best golf alone. My biggest fear is probably hitting a hole in one and having nobody to witness it, but it probably won't happen anyway.