The Freedom of Snowshoe and Ski

Choices and trade-offs on the snow. 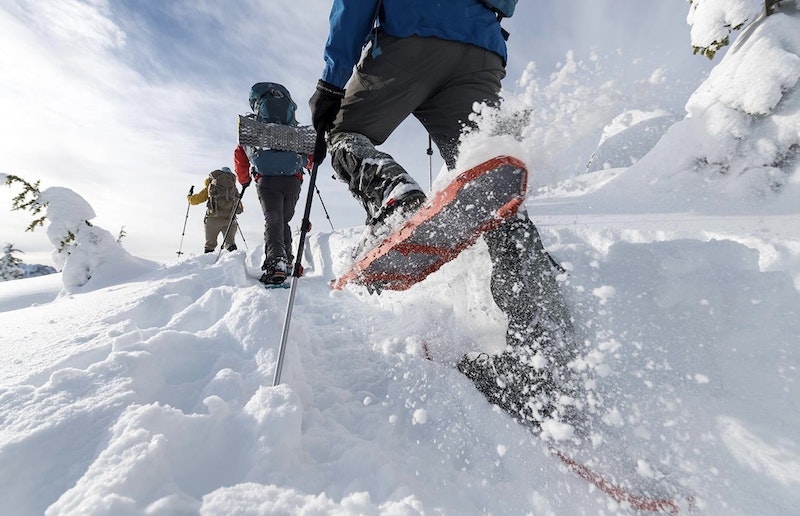 On snowy terrain, equipment shapes where you can go, how fast you can move, your risks, your hopes, your sense of what you’re doing there. Trade-offs abound. Snowshoes can get you through rugged terrain, at a walking pace; strapped onto your hiking boot, they distribute weight to keep you above the snow, while a jagged metal crampon provides a solid grip.

By “snowshoe” I mean the modern version, typically with an aluminum frame, a development of the past half-century. The traditional wooden snowshoe crisscrossed with rawhide lacings is another story; I’m told it’s like walking on a tennis racket, though it has its aficionados. I’ve snowshoed over the years. A few years ago, I took my son snowshoeing into the park next door to our house in northern New Jersey. The staffers told us this was prohibited by regulations, and soon revamped their “No Skiing” signage to include “No Snowshoeing.”

In cross-country, or Nordic, skiing, there are laced boots that click onto the ski at the toe, leaving the heel free; you step but also glide, picking up speed and momentum. Nordic skis are narrower than the skis for Alpine, or downhill, skiing. Snowshoes and cross-country skis both give you a sense of being lightly encumbered compared to the bulky boots and tight bindings of Alpine, although downhill skis enable a world of speed, outpacing even their rival, the snowboard.

Last weekend, we went to Mohonk Mountain House, a sprawling, century-and-a-half-old resort in the Shawangunk Mountains, or Gunks, of New York State’s Hudson Valley. It’s a special place to my wife and me, not least because we got married there; we’d first scoped it out as a venue right after I’d proposed in nearby Minnewaska State Park. Recent snows ensured there’d be ample snowshoeing and cross-country skiing on the resort’s property and in the surrounding 8000-acre Mohonk Preserve.

My wife, son and I snowshoed and skied cross-country, the former activity on a scenic path along a ridge, the latter on modestly sloped trails through the woods. On trails shared by snowshoers and skiers, it’s good etiquette for snowshoers to stay off grooves carved by skis, to avoid messing up the smooth skiing passage these allow. The snowshoers, after all, can go just about anywhere. A number of rugged side paths at Mohonk were marked as snowshoe trails.

Downhill skiing is a family tradition on my wife’s side, as I recently wrote. The skills of winter sports are transferable to a degree. My wife does cross-country with the balanced ease of a longtime downhiller, and our 11-year-old son got the hang of it quickly. I’ve only gotten into cross-country this year, though I tried it once two decades ago. Cross-country’s learning curve at the outset is less steep than that of downhill skiing, but it still leaves room to improve and try more difficult trails. We went ice skating a couple of times over the weekend, as well. My skills there are minimal, ironic as that’s the only winter sport I learned as a kid. Long non-participation had brought me to square one, stepping gingerly across the ice, trying to glide.

There are numerous variations for moving across snow and ice, among them: Alpine touring, in which you switch between a free and a locked-in heel so as to travel uphill as well as downhill, without the use of a ski lift; backcountry skiing with an emphasis on ungroomed snow; ski mountaineering, which includes elements of climbing; telemarking, where a bent knee and a free heel are employed in downhill; skate skiing, a form of cross-country using shorter skis and a side-to-side motion like that of a skater. It’s a world of choice and exploration.

There’s a freedom to winter sports, an attitude that they cultivate, that you want to be out there, not confined indoors, that you can see things and go places you wouldn’t get to otherwise. Climate change poses a threat to this, raising prospects that snowfall will be less plentiful and less reliable; that people will spend more time indoors year-round, in air conditioning during the extended summer before segueing into a tedious, sedentary winter.

Libertarians, among whom I once counted myself, focus on “negative liberty,” the freedom from external coercion. As important as that is, it’s not the only type of freedom, “Positive liberty” is the ability to do things; being a centrist, as I am now, may involve a greater appreciation of this type of freedom, and winter sports can accentuate that viewpoint. On the snow, what you can and can’t do depends greatly on your abilities, the equipment and infrastructure you have access to, the environmental conditions you face. You might be free from coercion on a deep-woods snowy trail, but that’s far from all that matters.

In my youth, I ruminated glumly over the philosophical problem of free will. One day I walked home in a Queens snowstorm worried that every snowflake had a pre-fixed trajectory. Nobody knows whether that’s true. Perhaps if I’d been a skier or snowshoer back then, I would’ve looked at it differently: that the snow is a landscape for our freedom, so make the most of it.