An early American looked far ahead and back. 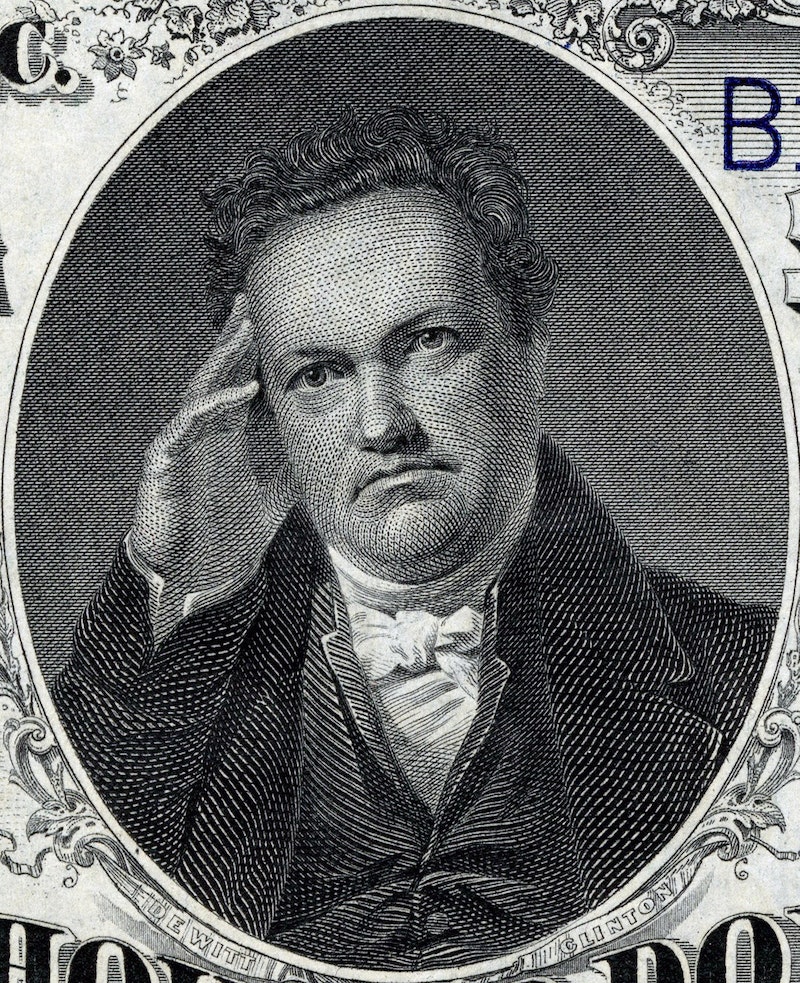 The pocket watch hangs in a glass-covered frame on a wall in a house in Vermont. It’s the property of one of my wife’s cousins. Passed down for generations, it likely once belonged to DeWitt Clinton (1769–1828), New York governor, U.S. senator and New York City mayor; principal leader in getting the Erie Canal built; presidential candidate; and respectively great-times-four and great-times-five grandfather of my wife and son (the latter named DeWitt).

The timepiece no longer works. An effort to have it repaired was turned aside on the grounds that its inner mechanisms were too antiquated. The compass continues to function. Inside the watch case is an engraving of Clinton from the 1820s, an image I hadn’t seen before. As it happens, a different image of him was one of the most reproduced in American history: the face on tax stamps that were placed on cigarette packs for decades until 1959.

March 2 was DeWitt’s 250th birthday. Several family representatives joined me at celebrations at the Erie Canal Museum in Syracuse and later at the Buffalo Maritime Center. I sold some copies of my book In DeWitt’s Footsteps and started sketching plans for the family to travel in the Buffalo Maritime Center’s soon-to-be-constructed replica of Gov. Clinton’s packet boat Seneca Chief, maybe in October 2025 on the 200th anniversary of the canal’s opening.

Clinton had an affinity for the long view, contemplating possibilities far into the future and past. He looked at earthen mounds in western New York and speculated about a long-ago lost civilization in North America. Many years before he worked on the Erie Canal, he imagined a future time when the “hand of art will change the face of the universe” and people will consider such engineering options as “whether the Alps and the Andes shall be levelled.”

Traveling along the canal’s historic and modern routes for my book research, I sometimes imagined Clinton, an archaeological maven, would’ve been enthused at what I was seeing: his original canal now scattered as ruins and remembered as “Clinton’s Ditch”; alongside the more visible remnants of the enlarged canal, built in the decades after his death to handle burgeoning boat traffic; and today’s steel-gated Erie Canal, now in use over a century.

In 1815, Clinton’s political career was at a low. He’d run unsuccessfully for president three years earlier, breaking with his own party to challenge the incumbent, James Madison. Having gradually lost his perches of political power, he held just one public office: member of a commission responsible for examining a prospective canal across New York state. He would soon ride that issue to the governorship. In a memo that circulated widely, Clinton explained why a canal was needed (spelling as in original):

“However serious the fears which have been entertained of dismemberment of the Union by collisions between the north and the south, it is to be apprehended that the most imminent danger lies in another direction, and that line of separation may eventually be drawn between the atlantic and the western states, unless they are cemented by a common, an ever acting and a powerful interest. The commerce of the ocean, and the trade of the lakes, passing through one channel, supplying the wants, increasing the wealth, and reciprocating the benefits of each great section of the empire, will form an imperishable cement of connexion, and an indissoluble bond of union.”

A decade after Clinton wrote this, the Erie Canal opened, and the danger of the United States not holding together along east-west lines faded away. The north-south tensions persisted, though the canal’s boost to commerce and industry also helped ensure that if a civil war came, the Union would have a powerful economic base from which to fight it.

On the night of DeWitt Clinton’s 250th birthday, conversation turned to the question of what the man himself would’ve thought about being remembered so long after his death. I suspect he would’ve regarded it as only fitting.