A View from Campgaw Mountain 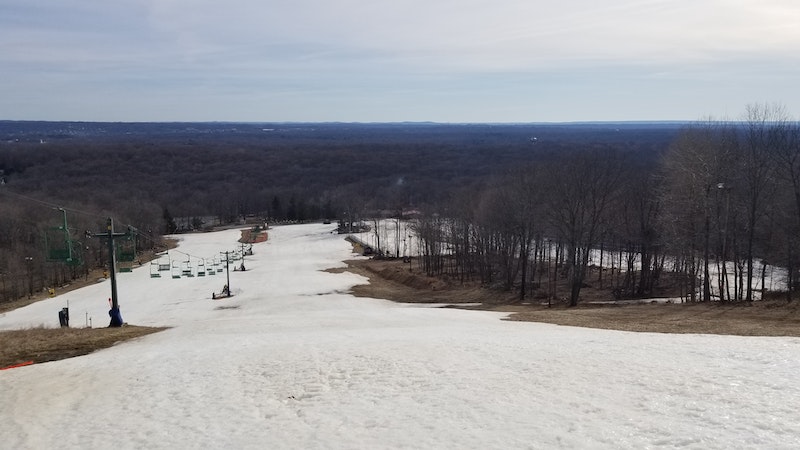 Agreeing that social distancing is a key to limiting the spread of the coronavirus COVID-19, I scrapped the plan to take a train to Manhattan for a midweek jaunt at an espionage museum. Instead, my friend Dan and I stayed local, hiking on Bergen County’s Campgaw Mountain, at the northern edge of northern Jersey’s low, long Watchung Mountains. The ski area was closed, but there remained snow on the ground, with sporadic skiing still going on into mid-March.

The network of hiking trails behind the ski area will, if you take it long enough, lead you to the other side of the mountain and a horse stable. The mountain was once a control site for Nike anti-aircraft missiles, until 1971 when President Nixon converted the area to recreational use. The threats had changed by then. The Nikes could shoot down Soviet bombers but not Soviet missiles. Their development had begun in World War II, as a defense against the Luftwaffe. Scattered scraps of barbed wire and metal along the hiking trails point to a Cold War past.

I’m an optimist about many things, but COVID-19 isn’t one of them. I don’t expect masses of the displaced soon to be encamped in these northern Jersey woods, but 9/11 and its aftermath seems a plausible benchmark for the physical and economic damage we’re likely to see. It might be worse. The tri-state area is emerging as a focal point of the pandemic. New Jersey reported its first COVID-19 death the day before we hiked, and New York state has deployed the National Guard to the Westchester town of New Rochelle, which has been stricken by over 100 confirmed cases. As I write this, my son’s school, which attracts students from a wide swath of New Jersey and New York, has just sent an email announcing its building will be closed, and classes will be held online, for the next two weeks.

The Trump administration’s response to COVID-19 has been one of “incompetence exacerbated by malevolence,” as Quinta Jurecic and Benjamin Wittes aptly describe it in an Atlantic article; the authors note this is an inversion of Wittes’ earlier, repeated characterization of the Trump presidency as marked by “malevolence tempered by incompetence.” When I recently reviewed Unmaking the Presidency, a new book by Susan Hennessey and Wittes, I drew upon my early viewings of The Man in the High Castle to illustrate the danger of Trumpian autocracy. As it turned out, the series’ disjointed final season, with plot lines abruptly terminated or wrapped up in absurd ways, evokes another feature of the Trump presidency: poor planning.

As we walked the trails of Campgaw, thoughts of recent television helped push worries about current events from my mind. One upshot of the unfolding crisis will be people spending more time at home watching TV. I’ll refrain from giving spoilers of The Man in the High Castle, as I believe the show’s still worth watching despite its weak points. But no amount of quarantine would make me view another episode (having seen part of the first) of Hunters, Amazon’s new drama about a group hunting Nazi war criminals in 1977. From the opening scene, in which a guy named Biff shoots everyone at his backyard barbecue upon being recognized by a Holocaust victim and reverting to a German accent, Hunters is an onslaught of dreck, fatuous and offensive.