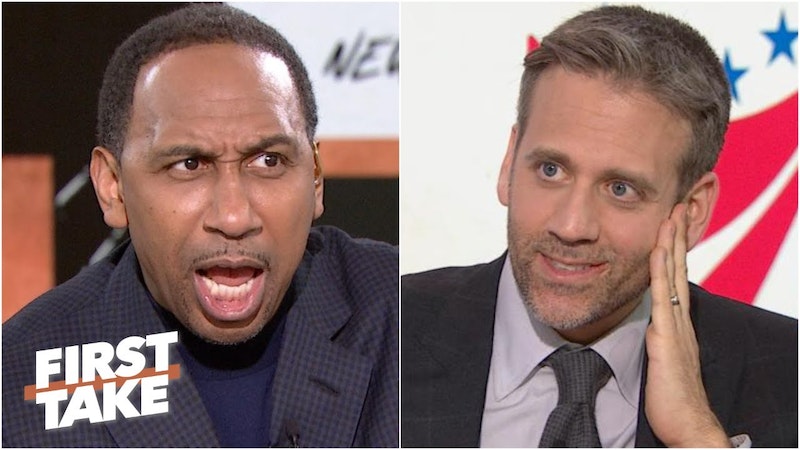 On days where I'm alone in the house and not living on Zoom, I often leave the television on. Channel selection at my place is pretty narrow: it's CNN, MSNBC, Fox News, or ESPN; I'm sort of an infogeek. Either way, it gets repetitive: CNN spent 36 hours unanimously producing the same mechanically-outraged sentences about Ted Cruz in Cancun, for example: evidently the biggest new story to emerge from the Texas freeze. When I switched over, I spent hours half-attending to speculation about whether Ben Roethlisberger or Drew Brees will retire, though I'd be satisfied to wait in silence and see what happens. Some days are better than others on cable.

If you spend all day oscillating between the chatter on CNN and ESPN, however, it's hard not to notice that the latter is muchbetter. The people talking are better talkers. It's far looser, more creative, more fun. Each commentator has a distinctive voice and point of view: each appears to be saying words he made up himself, maybe right there on the spot. They disagree boldly, teasing and insulting each other, often in a delightful fashion in various formats in various shows, all day. Allow me to mention Mina Kimes, Sarah Spain, Wilbon and Kornheiser, Woody Page, Marcus Spears, Ryan Clark, Domonique Foxworth, and above all Stephen A. Smith and Max Kellerman. Even the hosts—John Anderson and Scott van Pelt, Sage Steel and Hannah Storm (the beginning of an all-female super-hero team), Elle Duncan and Matt Berry, are loose and funny, even if they leave the big opinions to Stephen A.

"Number one, Max, you done lost your damn mind!" Here's how professional yappers should behave on television, I think.

Compare the roster above to, let's say, Ana Navarro, S.E. Cupp, Maria Cardona, Paul Begala, Mia Love, Bakari Sellers, John Avlon—Gloria Borger, Dana Bash, John Harwood—Jake Tapper, Don Lemon, Chris Cuomo, Brianna Keilar. So first of all, the anchors, reporters, and commentators are all, equally,peddling their opinions now, and they appear to be close to unanimous. They’re very, very solemn, for this is very, very serious. And they are civil too, even as they purse their lips in disapproval or strategically raise their voices, modeling rational discourse for the rest of us. They all spent 2020 almost exclusively on the word "emboldened" and are dedicating 2021 to "accountability." They are skull-crushingly uniform, conventional, and mechanical. Some of their opinions are straight-up bought, as when CNN throws out a panel of their own employees who are also Democratic or Republican consultants. That would be like ESPN hiring the assistant general manager of the New England Patriots to do sports commentary.

"Number one, John Avlon, you done lost your damn mind!" Well, that might keep me from keeling over on the couch for a nice snooze. They can do this on ESPN because sports are (probably) not as important as politics. And it's true, people who root for different teams or have different opinions on whether Roethlisberger is finished can argue vociferously and get along just fine. It happens all the time, in fact, and friendships among heterosexual men would be much more difficult without this activity, in which they entirely consist. I might think, deep inside, that a New York Yankees or Dallas Cowboys fan is evil. But it's a fairly innocuous evil that they probably got from their dad, you know?

But someone on the other side of the political debate may well be really evil. And also, they’re spreading their evil right now on the airwaves and must be stopped. Or: it is our responsibility to help shape America's future. That requires that we say "trust the science" all day, or whatever it may be, and see if we can't squash dissent. The insults on Around the Horn, say, can get brutal, but not as brutal as what might happen in the political realm, where in every cliché uttered the very future of the nation and who we are as Americans is apparently at stake.

Now, maybe it is at stake, in the halls of Congress or in the power grid of Texas. But it's definitely not at stake in the yapping of the hawking teds. They may be arguing about the very future of humanity itself as opposed to who they'd rather have on the roster, Brady or Mahomes. But the argument itself is not the very future of humanity, and isn’t likely to have any effect on it. The people on CNN and Fox are trying to control or change public opinion, maybe. An important task, or it might be, if everyone watching your network didn't already agree with you.

Politics is a world-shaking activity. Talking about it on television is just talking on television, though. And it has gotten to be incredibly bad television. If Jake Tapper, for example, took a show like State of the Union onto ESPN, he'd be thinking about how what he says could help the Philadelphia Eagles win games. He'd be mirroring the statements of the Philadelphia Eagles' spokesmen. He’d be outraged in a relentlessly repetitive manner against all things New York Giants.

You couldn’t possibly do sports television like that; it would just be gross, as gross as political television is now. But worse than that, it wouldn’t be entertaining. So what I'd suggest to the cable news networks is that they got a lot bolder, a lot more freewheeling, a lot more fun, with all sorts of people actually giving their real opinions, insulting one another within an inch of their lives. Loosen up, lighten up, and free your tongues, is my advice to you cable pundits and their producers. It's okay, because what you're doing has little effect on anything, but it's on my screen all day.