Penny-wise, pound-foolish is the theme at Fenway Park this offseason. 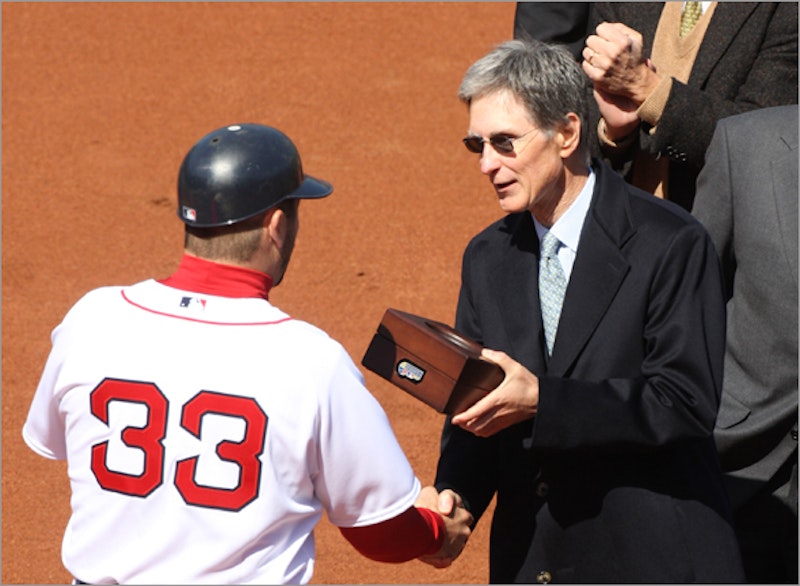 As an AARP Red Sox fan, I didn’t dwell on the team’s embarrassing September day in-day out display of indifference and incompetence, even though my son and I were present at Camden Yards on the last day of the season when departed closer Jonathan Papelbon blew the game to the Orioles, just minutes before the Rays improbably—down 7-0—won their game and clinched the wild card. It stung, of course, but when the Yankees were eliminated in the first round of the playoffs, I could watch the remainder of the post-season casually, with no worries of Derek Jeter (still!) or Robinson Cano of the cover of Sports Illustrated hoisting a World Series trophy.

You’d never know that the Braves’ collapse was nearly as humiliating as Boston’s, and allowed the Cardinals to nab the NL wild card and then the Series, but that’s the Northeast-centric baseball media for you. And when Sox manager Tito Francona was disgracefully dumped just days after the season ended, nuked by anonymously leaked rumors about his personal life, it was a nauseating spectacle, but that’s what happens in the John Henry-era Red Sox soap opera these days. When GM Theo Epstein left for Chicago, and the revelations about the Tubby Twins, Josh Beckett and Jon Lester, as well as John Lackey (baseball’s Newt Gingrich, filing for divorce last August from his cancer-ridden wife) soaking up the suds and slopping down the KFC in the clubhouse during games, well, it was a better story line than if the team just wasn’t good enough to play in October.

I’ve held my fire on the dire Sox situation until now, letting Booker Smith and Matt Kory weigh in on Splice Today, but it’s just weeks until spring training begins and, contrary to any Sox fan’s expectations, new GM Ben Cherington—Baby Ben to me until he shows some gumption—has done little, actually very little, to improve the squad, while the Yanks and Rays both look stronger than last year. Had the Orioles finally shown some spunk and demonstrated a willingness to contend, or at least finish at .500 for the first time in the 21st century—unlike their neighbors, the Nationals, who are building perhaps the most exciting team in the National League—I wouldn’t put up a strenuous argument against those who predicted a fifth-place finish for the Sox in 2012.

As noted above, I’m a longtime fan and take Red Sox meltdowns in stride—after the ’04 and ’07 World Series wins, it’s a lot easier—but what has me vexed early this year is the sudden austerity that owner Henry and his management cohorts Larry Lucchino and Tom Werner have dictated to Baby Ben. The salient issue now, more, apparently, than fielding an imposing team, is the payroll luxury tax of $178 million. Cross that line and new MLB rules duns a team for 40 percent—up from 30 percent—of the excess dough. No one likes to pay taxes, and it has to be irritating for Henry and Co. that less lucrative franchises reap the rewards of revenue sharing, which is gathered from the big-market teams like the Yanks, Phillies, Sox and Angels, but it’s not as if the Red Sox are, in a quick stroke, MLB’s version of Greece or Italy.

This is what’s strange: Henry’s a sharp businessman, worth somewhere near a billion clams on any given day, so surely, you’d think, he realizes that his Red Sox cash cow might dry up if the team continues his current run of No October Baseball. So, while the Yanks go out and get Hiroki Kuroda and trade for Michael Pineda, shoring up a shaky pitching rotation into a potentially awesome one behind ace CC Cheeseburger, and the Rays continue to practice their witchcraft in developing outstanding players (even if their attendance is dismal and they play in a dump disguised as a stadium), the Sox this offseason have acquired a platoon of rehab pitching candidates, a couple of relievers that could go either way, and closer Andrew Bailey from the A’s, the one promising move. Oh, sorry, almost forgot: last Saturday they traded shortstop Marco Scutaro to the Rockies in order to escape his $6 million salary. Okay, that leaves a gap at short, unless you think Nick Punto will turn into Ozzie Smith, but it’s said that now Boston can afford to sign free agent Roy Oswalt to pitch behind Lester, Beckett and Clay Buchholz. Which, considering lowered expectations, would be swell.

But back to the business world. Henry, in his current skinflint mode, is jeopardizing his enviable revenue stream from the Sox. If the team flounders early on, a reasonable possibility (even if the new manager, the irritating Bobby Valentine, toes the management line, and says—surprise!—“That’s why you play the games”) it’s likely the sellouts stop at Fenway, Henry’s NESN television station gets lousy ratings and all the promos and sales of Sox merchandise go south.

Mind you, this is for the sake of, oh, maybe $10 million in luxury tax blood money, which surely would be made up by SRO-only games and post-season dough if he wasn’t so tight on the cash register.

I don’t normally care for longtime Boston Globe sports columnist Dan Shaughnessy—he has a maddening love-hate relationship with the Sox and its players—but his excoriation of Henry on Jan. 20 was on the mark. He writes: “Sox spinmeisters need to cease promoting the notion that the ball club is tapped out and can’t spend more. The money is there. Holding the line on spending is a choice, not a necessity. ‘We just didn’t feel like we needed wholesale changes,’ said Cherington. ‘This was a team that was on pace to win a lot of games and make the playoffs and we had a tough September.’ Followed by a tough October, a tough November, a tough December, and a tough January.”