Cheer Up Baltimore: It's the AFC Championship Game

It's time to rally around the team, not gang up on them. 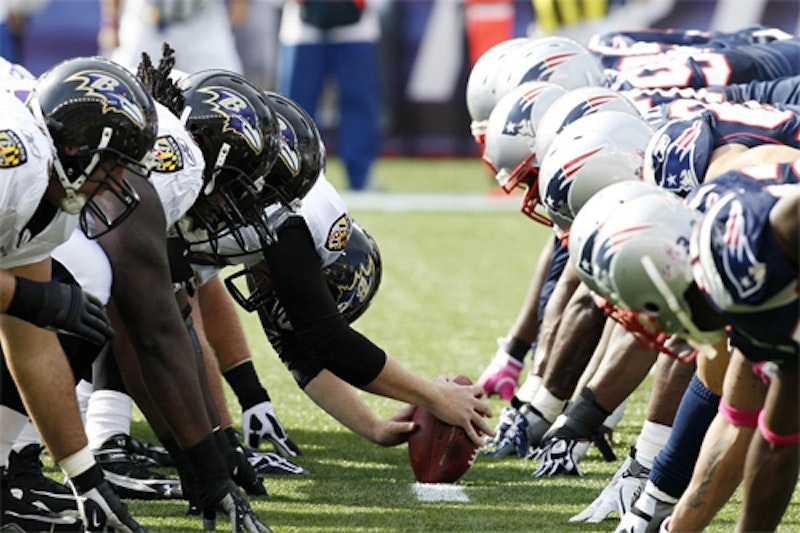 I spent too much time as a youngster listening to talk radio coverage of Baltimore’s quest for an NFL expansion team. Countless hours that could’ve been used chasing girls were wasted playing “Baseball Stars” on Nintendo and absorbing the sports radio ramblings of “experts” handicapping Baltimore’s chances of being awarded a new football franchise. I learned two things from that fruitless exercise, 1) there are no experts, everyone is either forwarding carefully constructed info from (league) sources or taking a position to create controversy (this means you Skip Bayless), and 2) the NFL never had any intention of placing an expansion team in Baltimore.

The city of Baltimore has come a long from the disappointment of the NFL awarding expansion franchises to Carolina and Jacksonville. Ray Lewis and the Ravens are the modern incarnation of Johnny U. and the Colts of Baltimore's past gridiron glory. I watched last Sunday's game against the Houston Texans from the comfort of my living room. My jersey clad five-year-old son and two-year-old daughter bounced around the house chanting "Go Ravens!  Go Ravens!" shaking pom-poms and foam talons. The Good Guys beat the Texans, 20-13. All was right with the world. That is until I checked Facebook and Twitter.

Twitter is wonderful tool to gather breaking news and find out what your favorite celebs had for breakfast. It's also a goldmine for emotional outbursts and overreactions. While I was thrilled with the Ravens victory, which propelled them to the third AFC Championship game in team history, a lot of Ravens fans weren’t happy with the style and margin of victory, and some other spoiled brat-sounding bullshit. People were clamoring for the head of offensive coordinator Cam Cameron, complaining about the offensive line, lamenting that the Ravens will be blasted by the big bad Patriots, and generally sort of pissed off about the biggest home playoff win in franchise history.

I don't get it. Sure, Cameron's inconsistent play calling has been frustrating at times but most of those issues went away after the embarrassing loss to Jacksonville in which All-World running back Ray Rice was inexplicably left out of the game plan. The Ravens are a run-first offense and didn't change that philosophy in Sunday's win against Houston. Rice carried the ball 21 times, despite averaging just 2.9 yards per carry, and caught four passes against the Texans. When Rice gets 25 touches in a game good things generally happen. The Texans, and their #2 ranked defense, should be commended for bottling up the usually explosive Rice. I'm guessing if Rice had broken a tackle and taken one of those carries to the house for a 50-yard touchdown run Cameron would have been regarded as a genius.

The Ravens have played 12 games this season against Top 10 NFL defenses (it's tough sledding in the AFC North, where all four teams ranked among the Top 10 defenses in the league) and went 10-2 in those contests. The only losses were on the road to Jacksonville and Seattle, a loss that featured David Reed's two fumbled kickoff returns.

Complain about Cameron all you want, but the Ravens have gotten the job done against the NFL's best this year. The New England Patriots played exactly two teams with winning records during the regular season. They lost both games. With Sunday’s win the 2011 Ravens are now 7-0 against playoff teams. New England didn’t beat a playoff team until last weekend’s thrashing of the 9-8 Denver Broncos. If the NFL employed BCS style rankings the Ravens would be Alabama and the Pats would be Boise State.

Relax Baltimore. The Pats have a prolific offense and a Swiss cheese defensive backfield. It’s always tough to win on the road, but the Ravens have made a habit of it over the past few years, including the 33-14 pasting of the Pats just two years ago. It’s a time to rejoice, wear your purple, and rub it in to every damn Steelers fan you see. It may not always be pretty, but no one ever said it had to be. The Ravens have piled up 13 wins so far and are just two away from their ultimate goal. The next time you feel like bitching about how the team won or the margin of victory just take a deep breath and be thankful you’re not a Redskins, Chiefs or Browns fan, or that Baltimore teenager listening to a static filled AM radio broadcast with crossed fingers.