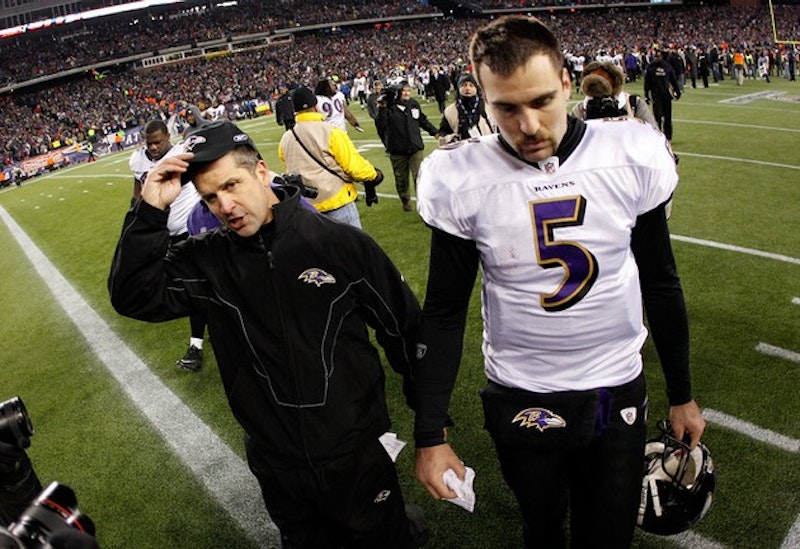 I've started writing this about five times over the past two days only to stop and begin again.  The brutal and sudden nature of Sunday's loss to the Patriots in the AFC Championship game yielded a strange array of emotions.  If this were ten years ago I probably would've have fired off a post game tirade calling for the heads of numerous Ravens coaches and suggesting that certain players seek refuge in the witness protection program.  I likely would have suggested a number of creative alternatives for Lee Evans' hands since he clearly has no intention of using them to catch footballs.  I probably would have rounded out my obscenity laced bitch-fest by denigrating everyone with the surname of Cundiff.

The Ravens loss on Sunday was the most suddenly sharp kick to the balls that I can ever remember being delivered by a sporting event. I was in Cole Field House for Maryland's infamous "Gone in 60 seconds" game against Duke in 2001 when the Terps blew a 10 point lead with 54 seconds left on the clock. That was a crushing defeat but it developed like a slow motion train wreck. It wasn't pretty to watch but you could see it coming. The Orioles loss in Game 1 of the 1996 ALCS against the Yankees aided by a non-call on fan interference was a tough one as well.  In that case we could take solace by heaping blame on cowardly umpire Richie Garcia, who refused to make the correct call in the hostile environment of Yankee stadium, and the pre-teen who reached over the fence and became an instant celebrity. Sunday's Ravens game offered neither time to brace for the disappointment nor a convenient out of town scapegoat to vilify.

In the moments immediately following Lee Evans drop of the would-be game winning touchdown and Billy Cundiff's shank of the would-be game tying field goal I was greeted by something that I was not privy to ten years ago; the endlessly positive perspective of children. My goddaughter offered encouragement after the field goal miss with something along the lines of "Oh well, it was just a football game," followed soon thereafter by the excited shrieks of my five year old son who was thrilled that he had just scored a goal in foosball against one of his friends. And with that life goes on.

I heard a woman call into a radio show and describe Sunday's loss as heartbreaking. The loss sucked, but heartbreaking should be reserved to describe events that could truly break someone's heart. Actually, for Lee Evans and Billy Cundiff the loss may have been heartbreaking, though I would assume the two of them will put the game in proper perspective in the coming days.

I spent hours in my backyard as a kid taking batting practice against neighbor kids, all of us pretending that we were Cal Ripken up to bat in the bottom of the ninth inning of Game Seven of the World Series. I can only imagine Cundiff and Evans have similar childhood memories of imagined football glory. For both of them destiny called on Sunday. Evans had a chance to make a catch that would have sent his team to the Super Bowl. After toiling in NFL obscurity for years in Buffalo the receiver finally had a chance to show his worth on the big stage. He overcame injury and inconsistency this season to post his best statistical game of the season on Sunday. Joe Flacco delivered a perfect pass into his chest and for a brief instant all of Baltimore leapt from their seats. For a fraction of a second Lee Evans was the hero, and then just as suddenly he wasn't. Seconds later kicker Billy Cundiff raced out to attempt a chip shot 32 yarder that he could probably make in his sleep, only he didn't.

It was over. The season, the Super Bowl hopes, my unfortunate foray into the world of fu manchu grooming, It was all over.  Then my son scored a foosball goal and snapped me back to reality. My goddaughter was right, it was just a game; more important than some but a game nonetheless.