Are teams really that afraid of Manny being Manny? 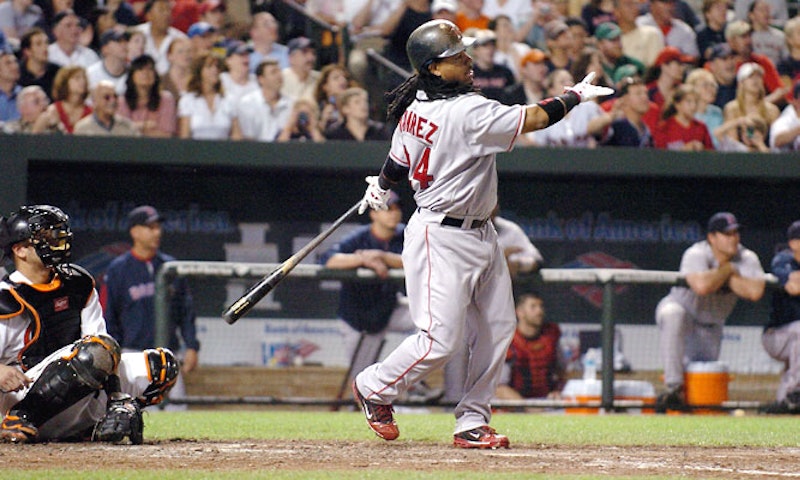 Manny Ramirez is having trouble finding a job. Why? I can’t say. The 39-year-old’s career once seemed destined to be immortalized in the Hall of Fame, but those dreams were shot down because of his reported use of banned substances. Like Alex Rodriguez, Barry Bonds, and Roger Clemens, the steroid era has claimed another all-time great.

As opposed to the ongoing Ryan Braun controversy, I can’t imagine that the sports media is upset sad to see Manny’s legacy tarnished. Even before the PED scandals, his career was already marred by a notoriously bad attitude, wild stunts, and an overly eccentric personality. When he wasn’t hitting home runs and getting on base like crazy, Manny was demanding a trade from the front office or assaulting the elderly. In the baseball world, only Milton Bradley comes with more baggage.

But from a business standpoint, why should that matter? Aside from the occasional scuffle with his teammates, Manny was a mainly neutral clubhouse presence. No one can deny his natural ability to hit a baseball, with or without chemical help, so he could act as a positive mentor to the younger players. With his legacy greatly in question, the right-hander would be walking on eggshells all season so as not to offend even the most sensitive sportscaster or front office personnel. The most important thing, though, is that the guy can still hit and be a very productive DH.

White Sox fans remember Manny’s 2010 cameo in Chicago for only one thing: he had nearly no power. I’m sure the Rays faithful (all 15 of them) can also picture the “slugger’s” 2011 slash line, when he hit .059/.059/.059 in 17 plate appearances. That could be due to age, or the lack of juice, but most likely the power outage was caused by luck. Altogether, Manny played with those two teams for about one month, and with the Pale-Ho’s he still finished with a respectable .261 batting average and impressive .420 OBP. Power can come and go. One month, a slugger could club 12 round trippers and the next hit only one. Just look at Adrian Gonzalez’s 2011.

Manny is simply looking for a minor league deal, something to get him back into the sport. His 50-game suspension can be served in the minor leagues, which will not only get him ready for the season but also give a team an idea of what to expect and whether or not they should call him up to the Bigs. It’s really a no-risk scenario. If Manny crushes the ball in triple-A, then whoever signs him will have a very inexpensive DH. If he doesn’t live up to expectations, then all they have to do is release him, he’s a bum anyways.

American League teams are stupidly dodging Manny Ramirez because they think he could compromise the integrity of their club. In reality, he’s potentially the best bargain on the free agent market.