Can Yu Darvish Lead the Rangers to Another World Series?

Maybe, maybe not, but he's got instant celebrity written all over him. 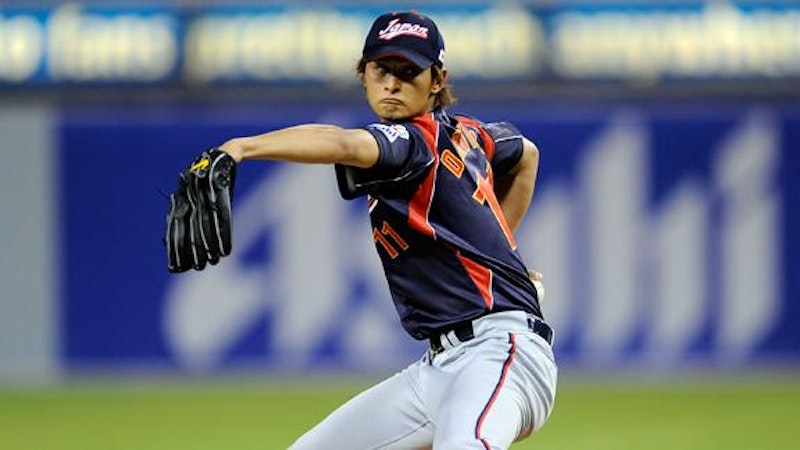 The Texas Rangers signed Japanese right-hander Yu Darvish yesterday to a six-year $60 million contract. That’s in addition to the $51.7 million the Rangers agreed to pay the Nippon Ham Fighters just for the chance to negotiate with Darvish, bringing the club’s total commitment to over $111 million. Rangers President Nolan Ryan went to the Hall of Fame by causing thousands of batters to swing and miss. A swing and miss on Darvish may define Ryan’s career as an executive.

The Darvish move is a bold stroke for Ryan and GM Jon Daniels. The duo hasn’t been averse to making tough decisions. The decision to convert C.J. Wilson to a starter led to two World Series appearances and made the pitcher a multi-millionaire. Earlier this winter they decided to move closer Neftali Feliz to the rotation and sign former Twins closer Joe Nathan to finish games in 2012. There is speculation that the Rangers may still be laying in the weeds about to pounce on Prince Fielder should his options remain limited as Spring Training approaches.

By all accounts Darvish is an elite arm with ace potential. The Rangers’ decision to allow Wilson to bolt as a free agent and sign with the rival Angels is telling. Wilson signed for five years and $77.5 million with Los Angeles. The Rangers apparently feel that Darvish for $111 million for six years is a better bet than Wilson for $77.5 million over five years. Darvish is six years younger than Wilson.

The Ballpark in Arlington, the Rangers’ home field, is a notorious home run haven. Of course, playing host to the typically potent Rangers offenses over the years may have something to do with that reputation. Darvish has pitched over 1000 innings in his pro career and allowed just 39 home runs in that time. His apparent ability to keep the ball in the ballpark may have as much to do with the Rangers’ interest in him as his size (6’5”), age, and durability.

As a baseball nerd I’m thrilled that Darvish is coming to the States. It will be interesting to see how his game translates to MLB. Darvish’s transition to American culture may be just as fascinating to watch. From all accounts Yu sounds like more of an Ichiro style cultural icon than his pitching predecessors like Dice-K and Hideo Nomo.

Not only is Darvish an All-Star Japanese pitcher coming to Texas of all places, but his father is Iranian, he’s appeared on the cover of GQ, and his ex-wife is a Japanese movie star. If I didn’t know any better that sounds like the worst setup for a sitcom since Saved by the Bell: The College Years. Here’s hoping some desperate network gives Darvish a reality show. I can picture him now wearing a 10-gallon hat and too-tight jeans checking Yelp! on his iPhone for a decent sushi joint in Fort Worth.