Orioles Turn Back the Clock on Ticket Prices

You can’t lose for 14 years and expect a full ballpark. 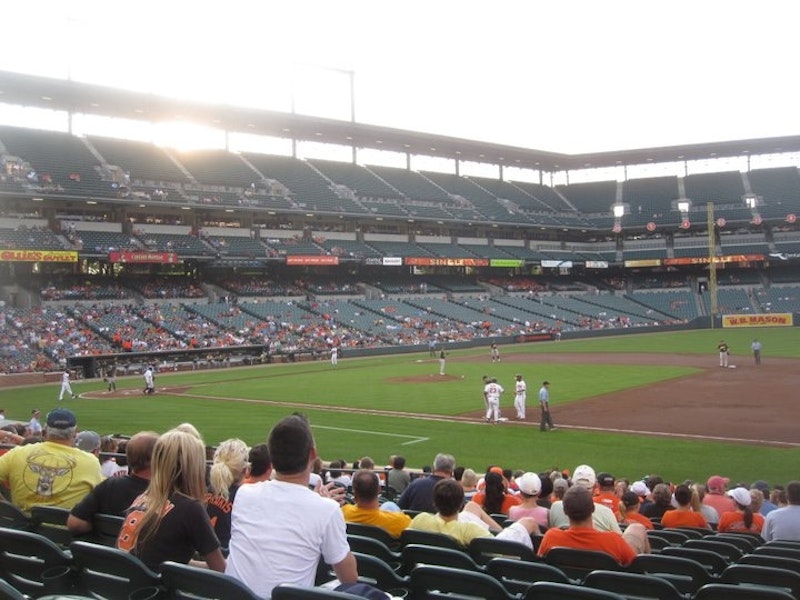 The line of thought concerning the Baltimore Orioles over the years has been that the fans would return to Camden Yards when the team started winning. While the team's unexpected 2012 success has resulted in an increase of approximately 3000 spectators on average, last week's poorly attended White Sox series has caused the team to rethink its ticket prices. The Orioles announced earlier this week that they would roll back the tab on some bleacher seats and upper deck sections for next week's series against Tampa Bay to 1992 levels. They've spun it as a turn-back-the-clock promotion to honor the 20th anniversary of the ballpark, which is fine if it helps the marketing department sleep at night.

Baltimore sports fans took some shots from the national and local media last week for the empty seats during the White Sox series (attendance was at least partially hampered by the Grand Prix traffic detours). It always amuses me when people who are paid to go to the game and eat free food criticize fans for not paying $30 for a bleacher seat. Still, I get it. The Orioles haven't won so much as a Pick 3 for 14 years and now the team is in the thick of the American League pennant chase. Where are the fans?

The fans are still here. The problem is they've spent the past 14 years finding ways to occupy their summer evenings with activities other than terrible baseball. It took years to chase the fans away and it's going to take more than five months to bring them back. People will cite vacations, little league, and pre-season football as excuses for not going to the ballpark. The fact is the Orioles haven't made going to the ballpark particularly fun or easy over the past decade plus. Between the revolving door in the manager's office, the bevy of failed draft picks, and the $2 surcharge on game day ticket purchases the Orioles have been a case study in how not to get people to come to the games. The rise of MASN has also resulted in every game broadcasted live to my living room each night.  Why leave the safety and comfort of my sofa to battle traffic to go see a team that hasn't cared much about winning?

The Orioles will play host to the Yankees this weekend. A series win could have the Orioles in first place this late in the season for the first time since 1997. The ballpark will be full. Yes, there will be the customary over abundance of obnoxious Yankees fans in attendance, but you'll hear an audible "O" during “The Star Spangled Banner.”

The Orioles lost a generation of fans. Many young people in the Baltimore area grew up with the Orioles as an afterthought. Going to Camden Yards was something you did when your dad scored free tickets and you had some spare time. The Orioles’ on-field product has come a long way this season, but just as the fan base wasn't destroyed in a season it won't be rebuilt in one either.

The reduced ticket prices for the Rays is a solid start. It will likely get people back to the ballpark who haven't been there in years. Now comes the really hard part; getting them to come back. The real story will be told by the Orioles' season ticket sales during the offseason. If the team can finish strong, make a postseason run, and possibly sign a free agent starter to garner additional fan interest, they may be able rest on the product to drive attendance next season rather than marketing gimmicks.