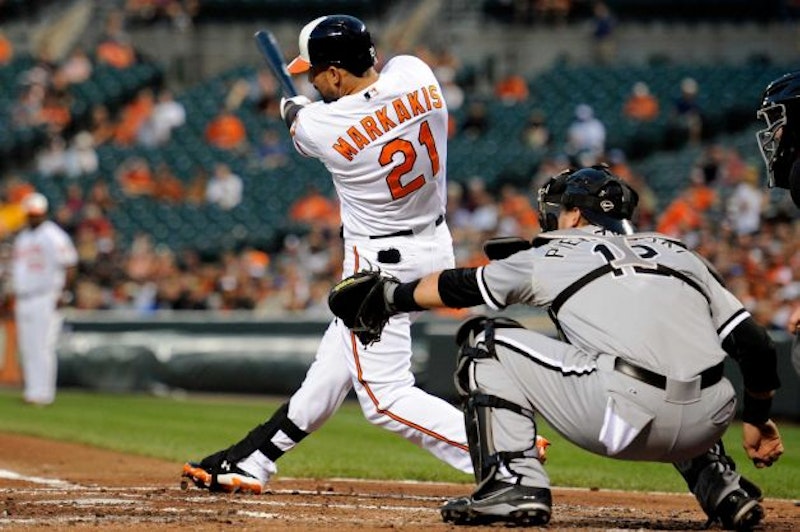 As the baseball season winds into the final stretch the MVP candidates in each league will make their presence known. Mike Trout, Miguel Cabrera, Buster Posey, and Andrew McCutchen have received their share of praise for stellar performances this season. But what about the other guys who chip in to keep pennant hopes alive?

The Orioles’ run to the top of the AL Wild Card standings is made even more unlikely when you take a look at the box score every day. The team regularly gets huge hits from long forgotten players like Nate McLouth, Lew Ford, and Omar Quintanilla. The performance of veteran right fielder Nick Markakis has been lost among the outstanding work of closer Jim Johnson and set-up man Pedro Strop as well as Adam Jones' early season power surge. Not too long ago Markakis was an underperforming, overpaid, former All-Star who peaked in 2008. Markakis was hitting just .256 with a .785 OPS in late May when he was sidelined with a wrist injury. Manager Buck Showalter moved Markakis from his customary third spot in the O's lineup to leadoff when he returned from the disabled list. Markakis has responded by raising his average to .293 and his OPS to .830. In 43 games at the top of the lineup Markakis has scored 28 runs and the Orioles have posted a 27-17 record.

The Tampa Bay Rays are giving the Orioles a tough fight in the AL Wild Card race. Tampa has been buoyed by the surprise performance of veteran infielder Jeff Keppinger. When All-Star Evan Longoria lost more than three months to a hamstring injury it was Keppinger who filled in admirably at third base. Keppinger played 40 games at third in Longoria's absence. He’s also provided a right-handed alternative at first base and DH. Keppinger is hitting .293 with an OPS of .808 in 266 plate appearances this season and has tagged lefties to the tune of a .984 OPS in 86 at-bats.

The Cincinnati Reds were flying high when superstar first baseman Joey Votto landed on the DL in mid July. The Reds have gone 28-14 since Votto's injury thanks in large part to the work of outfielder Ryan Ludwick. The 34-year-old Ludwick is having his best season since 2008 when he was with the Cardinals. Ludwick has slammed 12 homers, knocked in 35, and raised his OPS from .791 to .905 in Votto's absence. Rookie infielder Todd Frazier, 26, has chipped in as well. Frazier is a rookie who filled in for an injured Scott Rolen early in the season and has started at first base with Votto out of the lineup. Frazier's .293 average, 18 homers, and 60 RBI make him a leading contender for the NL Rookie of the Year award.

St. Louis Cardinals' utility man Allen Craig garnered national attention when he hit three home runs in the 2011 World Series. After Albert Pujols left for a mega contract with the Angels, Craig's offensive production and versatility figured to win him a fulltime job with the Cards in 2012. St. Louis instead went out and signed Carlos Beltran and moved Lance Berkman to first base in place of Pujols. Berkman has battled knee troubles all season, which has opened the way for Craig to get regular at-bats. He has assumed the role of everyday first baseman in St. Louis and put up Pujols-like numbers. In 86 games this season Craig is hitting .320 with 20 home runs and a .966 OPS. Craig, who is just 27, has given the Cards a highly productive and inexpensive long-term solution at first base.