Nationals Park is Big on Quirks, Low on Charm

Observations from a ballpark enthusiast. 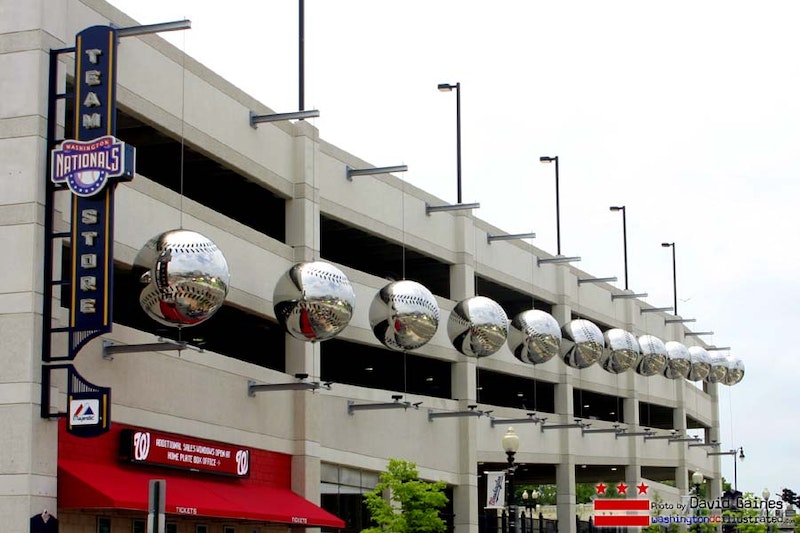 I made the trek down the BW Parkway last Thursday to see the Cubbies battle the Nationals. It was my first chance to see young stars Anthony Rizzo and Bryce Harper in action, as well as Nationals Park. I left with a mixed review of the ballpark, some unanswered questions, and a confounding experience at a concession stand.

I'm a ballpark enthusiast. I've had the good fortune to travel to ancient venues like Wrigley Field and Fenway Park, as well as the newer retro parks in Pittsburgh, Cleveland, Detroit, and Philadelphia. Camden Yards will always hold the top spot in my heart, but I sincerely wanted to love Nationals Park. I hold no ill will towards the Nats in the way that I do the Redskins. Frankly, I'm thankful that the Nats give me a way to watch some National League baseball every night on MASN or MASN2.

I'll start with the positives. Nationals Park is a quick two-block walk from the Navy Yard metro station; proximity to a convenient mass transit system is a definite plus. Score one for Nationals Park over Camden Yards.

The concession stands offer a variety of local D.C. favorites. We settled on Ben's Chili Bowl, which had an outlet close to our seats in the upper deck. My friend and I went for Ben's "Half Smoke" with everything. The combination of grilled sausage, jalapenos, melted cheese, chili, and mustard was as delicious as it was messy. I suggest you learn from my mistake and grab a fork and a fistful of napkins. Ben's Chili Bowl scored a home run with the grub, but I'll get back to them later.

Nationals Park also has a prime location along the Anacostia River waterfront and an abundance of digital signage. The massive scoreboard in center field delivers a wealth of information. Smaller boards encircle the seating bowl ensuring that no matter where you're looking you always know who's batting and the count. The park even features digital boards over the bullpens to let fans know who is warming in the respective pens.

The alignment of the ballpark along the river is odd. The river runs along the first base line, meaning that the first base side stands completely block the view of the river. I know the Anacostia River may not be the most picturesque waterway in our Nation's Capitol, but why waste prime real estate on a ballpark that completely ignores the waterfront? The ballpark's shunning of the river might make some sense if the positioning allowed for a better view of the Capitol and Washington Monument, but those aren't visible either. If someone placed you in the left field upper deck in Nationals Park you would have no idea that you were in Washington save for the massive red Ws plastered all over the park. While PNC Park makes great use of Pittsburgh's rivers in the ballpark design, and Citizens Bank Park features the Philadelphia skyline in center field, Nationals Park does neither.

Nationals Park also has some architectural quirks that were apparently meant to add charm and aesthetics but come off as strange and out of place. The ballpark has five levels of seating, which is a bit overwhelming as you walk in the center field gate. It looks more like a generic football stadium than a ballpark. The press box is situated behind the plate on the top level, a good 40 feet higher than a standard baseball press box. The press box seems to be closer to Reagan National than the playing field. There are also a few odd areas beyond the center field wall including a triangle covered in synthetic turf and a large area that houses dumpsters. The areas look like unfinished afterthoughts. Couldn't the dumpsters go under the stands?

As the Cubs and Nats cleared benches for a second time, a skirmish that was apparently set off by the homer-happy Nats mercilessly pounding the undermanned Cubs for four days, I made my way back to Ben's Chili Bowl for another soft drink. I arrived to find no one at either cash register, an employee feverishly scrubbing the grill, and seven people behind the counter arguing about something that was so important it was worth ignoring the two customers ahead of me in line. I thought perhaps time had gotten away from me so I checked the scoreboard; it was the top of the sixth. Ben's Chili Bowl was closing up shop with four full innings left to play. I was baffled. I was also thirsty, battling a sinus infection, and in desperate need of caffeine.

The best thing about Nationals Park is Bryce Harper. I've watched Harper play on TV a number of times this season but you need to be in the ballpark to truly appreciate him. He’s astoundingly quick on the bases. Harper put on a good show for us lacing a triple into left center in his first at-bat. He scored a few batters later on a ground out to the pitcher. There is a notable buzz every time Harper comes to the plate, and rightfully so. The 19-year-old star is worth the price of admission, and good thing because the ballpark is just okay.