Red Sox GM Ben Cherington has a lot of work to do, but he’s right man for the job. 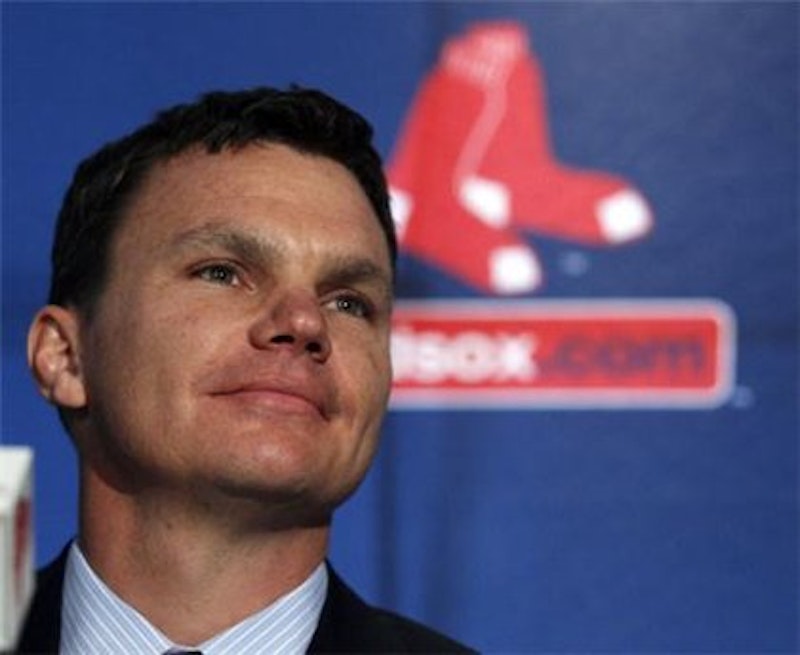 It’s been a little over a week since Red Sox GM Ben Cherington sent his three highest paid players (and Nick Punto) to the Dodgers for prospects. The fact that Cherington was able to move Josh Beckett and Carl Crawford is jaw-dropping in itself, but take into account the fact that he actually received something of value in return, and you have one of the greatest trades of the decade. I’m not saying that Rubby De La Rosa or Allen Webster will dominate the AL East, or that Jerry Sands will finally catch his major league groove with Boston, but there is upside in each of the players acquired, and that potential is worth infinitely more to the Red Sox than the contracts of Adrian Gonzalez, Crawford, Beckett, and Punto.

The main problem is: where does Cherington go from here? The GM, after taking over for Theo Epstein, has had holes spread across his team from the beginning (left field, the bullpen, shaky rotation), they’re only more evident now (first base, left field, the bullpen, shakier rotation). But he’s got a lot of time to adequately assess the situation and organize a plan of attack for the offseason. The lackluster free agent market can work to his advantage, as temptations to sign a big money player will likely be lost on the aging, albatross-in-waiting guys like Josh Hamilton, Michael Bourn, Shane Victorino, and, I hate to say it, Zack Greinke. Sticking to one-year, reclamation project contracts should be the front office’s mantra in regards to free agents. Long-term deals were the source of the problem that weighed the Sox down all season.

This would all become much easier if Boston wasn’t set on competing in 2013. Taking a gap year to replenish the farm system, prime the major league club with a few up-and-coming youngsters like Jackie Bradley and, maybe towards the end of the season, Xander Bogaerts, and complete a couple of necessary trades would likely establish another dynasty, even stronger than the previous one Epstein and owners John Henry and Larry Lucchino foolishly destroyed.

They’re clearly not enamored with that idea, though.

Boston feels that they have the ability to compete next year, and they’re not wrong. It’s just not going to be that easy to accomplish. A winning 2013 season leaves little room for error.

Cherington will need to fill the gaping holes left by his recent, momentous trade. The process begins with deciding what status, if any, David Ortiz will hold with the ball club. The long time designated hitter has expressed his dissatisfaction with the team, alluding to the possibility of him landing with an AL competitor. Good luck with that. The DH market, like always, is saturated. Ortiz will not receive the two-year, big money commitment that he’s craved for years. In all likelihood, the lefty will re-up with Boston, but not after the requisite drama. Cherington should present the slugger with a qualifying offer, which would represent a pay cut of around $1.5 million. In that situation, Ortiz would probably decline, hit the free agent market, and come crawling back to Boston once he realizes the sparse amount of jobs available. Cherington will get his most productive hitter back and Ortiz will continue to grumble about disrespect.

First base needs to be one of the primary areas of concern. The free agent market lacks an impact superstar, like Prince Fielder or Albert Pujols last winter, which is, as mentioned earlier, a positive. Nick Swisher represents the upper echelon of corner infielders of the 2013 FA class. I like Swisher, but his reported asking price is outrageous. If the on-base machine is really looking for Jayson Werth money, then all his searching will be in vain. The market may be dry, but no team, not even the Dodgers, would throw away money that frivolously. He simply isn’t worth it: the switch hitter has never generated more than 4.1 fWAR in a full season, and hasn’t reached the 30-homer level in six years. A smaller deal, in the four-year/$50 million range, would be more palatable, and would more accurately match his ability. Mike Napoli is similar. Although his 2012 season has been less than stellar, with a paltry 1.4 fWAR accumulated thus far, the catcher/first baseman will likely be overpaid because of a fantastic 2011 campaign. On an affordable two- or three-year deal Napoli would be more than welcome, but he’ll probably out price himself before the Sox can even show serious interest.

What to do then? Offensively, first base is an area of strength for most teams in baseball; it just might not be for the 2013 Red Sox. There aren’t many options available if you stick to the free agent market. Re-signing James Loney is a possibility, with the hopes of him finally tapping into his exorbitant potential in a new environment, but it doesn’t offer much assurance. Lance Berkman is a candidate, too, though he’s been toying around with the idea of retirement recently, and would likely prefer to stay in the National League anyways. That leaves the final option, my personal favorite: bring back Kevin Youkilis! Things may have ended poorly, but Youk is a proven, albeit injury prone, commodity. Allowing the slugger to return to his natural position could help a great deal, and first base is much easier on the body than third. Youkilis staying healthy is no guarantee, but with the money Boston has saved it’d be easy to sign an insurance policy of sorts, like a Loney.

The outfield situation, left in particular, is also tricky. With Crawford in L.A., Cherington has more flexibility to explore one-year deals, audition younger players like Ryan Kalish, or experiment with a mix of the two. Jacoby Ellsbury, a popular trade target of late, should be the only current member of the team roaming the outfield next season. Trading the speedster would’ve been smart last offseason, when he was coming off a tremendous 9.4 fWAR campaign, but now, after a stretch of four months riddled with another debilitating injury, his value isn’t nearly as strong. With just one more year of arbitration left, Ellsbury will be looking for the money, and he’ll only get a massive payday if he performs like a franchise player. It doesn’t matter what franchise he’s representing in 2014 (as long as it isn’t the Red Sox), Ellsbury will play like an MVP in 2013.

Cody Ross, on the other hand, should be ditched. Cherington smartly inked the “right-fielder” last winter to a one-year, $3 million contract. As expected, Ross has performed and is now a free agent once again. This time, however, he won’t come so cheap. There’s no point in signing Ross for $25 million+ when he’s due for regression and there are comparable outfielders on the market that will be looking for short-term pacts. Melky Cabrera (huge upside, huge amount of baggage), Grady Sizemore (more upside, more medical bills), Ichiro Suzuki, and Andres Torres could all be more useful than Ross. Double-A center fielder Jackie Bradley Jr. is another reason to keep the multi-year commitments to a minimum, since he’ll probably land with the club around July.

With the outfield market deeper than most positions this year, sacrificing prospects in a trade doesn’t make much sense, unless an impact bat is being acquired. Shin-Soo Choo and Corey Hart, two players headed for free agency after the 2013 season, could be made available by their respective clubs, the Indians and Brewers. The two sluggers are more proven than the previously mentioned reclamation projects, but would come at a high price in terms of minor league talent. With the recently reduced payroll, it makes more sense to just spend money on offseason additions, at least in the outfield, rather than forfeiting prospects and the fate of the future of the ball club. The farm system is finally back to respectability, with standouts like Bogaerts, Bradley, Matt Barnes, Henry Owens, Garin Cecchini, Bryce Brentz, and the newly added Allen Webster, and now is not the time to dismantle it.

The bullpen, surprisingly, is an easy fix. Signing a slew of washed up/never panned out major leaguers to minor league deals has proven to be an effective way of assembling a sturdy bullpen. The Rays, year after year, are a testament to the system. Weird, if it’s so simple, why has Boston’s bullpen always been so bad? In past seasons, the Sox, like many other teams, have acquired and committed to individual relievers that they are dead set on. Relievers, by nature, are volatile. There’s a reason they’re in the bullpen. The first step in building a successful relief core is realizing that most of the men you sign won’t work out. Some will though, and that’s why Cherington should choose quantity over quality regarding the pen. Hand out a couple of inexpensive one-year, major league contracts to guys like Ryan Madson and then stick strictly to minor league deals.

The starting rotation isn’t nearly as big of a problem as the media makes it out to be. Jon Lester, Clay Buchholz, and yes, John Lackey should all have strong seasons next year. Buchholz and Lester have both rebounded from disastrous starts that have marred their 2012 statistics. And Lackey may not have been popular in 2011, but he wasn’t as bad as analysts, or the fans, made him out to be. The big right-hander accumulated 1.5 fWAR last year, and 4.1 in 2010. If Lackey can throw 200 innings with a FIP around 4.00, both realistic goals, he can easily be the effective innings eater that Boston desperately needs. The other two spots in the rotation can be filled in-house. Franklin Morales, Felix Doubrant, and Rubby De La Rosa will all be eyeing a starting spot come spring training. But while relying on two of those three may be convenient, it won’t be a vote of confidence for “Red Sox Nation.” Another one-year pact is recommended. Shaun Marcum and Jeremy Guthrie are possibilities. Marcum could get a few multi-year offers, but after a season mainly spent on the disabled list, it’s doubtful they’d be worth much money. The 30-year-old might want to reestablish his value a la Edwin Jackson or Adrian Beltre. Guthrie will definitely sign on the short-term. Guthrie bombed with Rockies, (but seriously, why would anybody think putting a severely homer prone pitcher in Coors is a smart move?), but rebounded with the Royals. The right-hander, an Orioles vet, has thrown effectively in the AL East for most of his career, and would be a solid fifth starter for Boston.

Finally, the only other issue to address is the manager. It’s pretty obvious that the Bobby Valentine experiment didn’t work out. Analysts have mused about hiring a rookie manager, much like the White Sox and Cardinals did this offseason, with Robin Ventura and Mike Matheny, respectively. Truthfully, it doesn’t matter whom Cherington hires, as long as the new skipper listens to his GM and doesn’t accidentally hit Scott Podsednik in the three-hole.

The Red Sox have a lot of work to do, that’s obvious, but it’s also clear that the team is reinvigorated and determined to restore its reputation. The historic Boston-L.A. swap was the first move that got me legitimately excited about the team all year, and I have a feeling that the energy that created the original “Red Sox Nation” has returned.