Could this finally be their season? 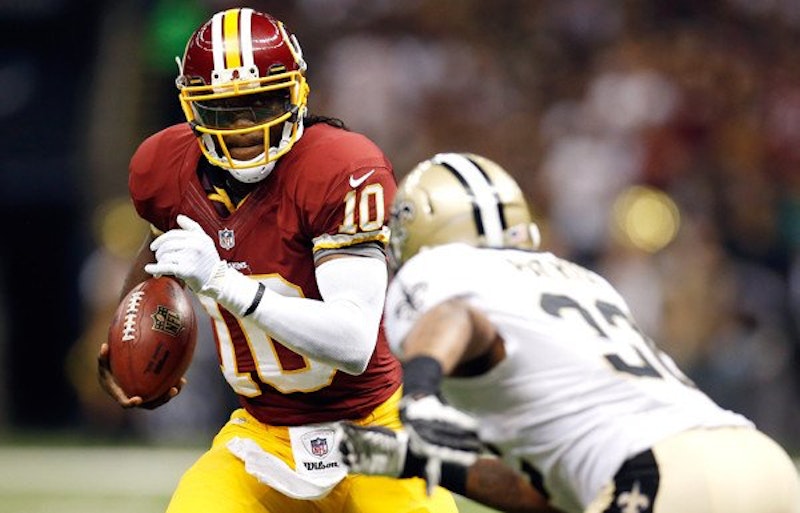 Wow. We heard all the hype, saw the college highlights, and watched him in pre-season. But none of that could prepare the football watching public for the sensation that was Robert Griffin, III on Sunday against the Saints. Griffin’s stats are shocking for a rookie quarterback, let alone one on the road, in a dome, in his first NFL game for the Washington Redskins. Yes, Griffin was 19-for-26 for 320 yards, two touchdowns, and no interceptions, looking like a Pro Bowl quarterback at the top of all facets of his game. He rushed 10 times for 42 yards including a 12-yard run on a third down and 16 where he eluded multiple rushers, bought time, and then turned it up field for the gain.

Stats aside, the interesting part is what this means for Redskins’ season. If Griffin can repeat that quality of performance, the Redskins’ many problems, fall away like so much fluff off a baby goose. Plenty of rookie quarterbacks who turned into nothing special have had good games. Even some rookie Redskins quarterbacks who turned into nothing special (which is pretty much all of them ever) have had good games.

So what makes Griffin’s game any different? Two things. One is the accuracy with which he threw the ball, and the second is his track record. Griffin has an amazing collection of talents: speed and arm strength among them. Watching the NFL draft you always hear about the physical gifts players have and you’d be forgiven for thinking that those were the defining characteristics of a good NFL quarterback. They’re not. The NFL is a quarterback’s league, but what defines a good versus a bad versus a great quarterback is the ability throw the ball with accuracy.

Aaron Rogers is huge and has a gun for an arm. He’d be a back-up or out of the league if he couldn’t complete passes with that gun. Drew Brees has a fine arm though you’d never confuse his for JaMarcus Russell’s, yet Brees is a Pro Bowl quarterback with a Super Bowl ring and Russell is the latest prime example of high first round failure. Why? Accuracy. Brees can thread the ball into the eye of a needle, and what’s more he knows when he can and can’t make a throw. They say in baseball good hitters are selective. They know when to swing and when not to, and even if the pitch is a strike, if they can’t hit it with authority they won’t swing. Brees is the same way. A guy might be open but if he can’t hit him, he won’t throw it. Similarly, a guy might be 99 percent covered, but if Brees knows he can put the ball where only the receiver can catch it, he throws it. The vast majority of times he’s right. That’s what makes him great.

It remains to be seen if Griffin can continue to do that, but he sure succeeded on Sunday afternoon under difficult circumstances. He repeatedly hit Redskins receivers in their hands while they were on the move, hit Redskins receivers in the hands while he was on the move, and what’s more, he didn’t attempt throws he couldn’t make. Maybe that is because with his arm strength he can make every throw, but I doubt it. Probably it’s because Griffin knows his limitations and doesn’t try to exceed them. Probably it’s also because the Redskins coaches didn’t put him in position to fail by avoiding plays that didn’t showcase his strengths.

But coaches can game plan all day and not come away with a performance like Griffin’s on Sunday. He took the plays that were called and turned them into gains on the field. The first touchdown pass, the 88-yarder to Pierre Garcon was a nice catch-and-run. It further showed the Saints defense to be a work in progress, at least on that specific play, but nonetheless it was a perfect throw that only the receiver could have caught. If that throw is behind Garcon or at his feet, that’s a decent 15-yard pick up and the Redskins have 73 yards left to go to score.

Even more impressive was the 27-yard pass to Fred Davis to start off the second quarter. Griffin rolled to his left, eluded an on-coming defender, repositioned himself and, having never taken his eyes off the field, threw the ball on a line back across to the left sideline into the hands of Davis. Coaches teach quarterbacks not to throw back across the field like that because most guys can’t make that throw. Griffin gunned it hitting Davis right in the hands.

These plays that I’m describing match up with what Griffin did in college. He was a high percentage passer who made smart plays and rarely turned the ball over. That often describes a player who doesn’t take chances and doesn’t generate much offense, a take-care-of-the-game quarterback, someone who relies on the rest of the team to win the game and who’s job it is to not lose. That’s what made Griffin so spectacular on Sunday. He was a don’t-lose-the-game quarterback who made plays. You can’t buy those guys in stores.

Again, how repeatable is Griffin’s performance? Based on his body of work in college and the pre-season, and based on the accuracy of the passes, it’s hard to say anything other than “very repeatable.” Now sure, even great quarterbacks have off days and Griffin isn’t yet a great quarterback. He’s a rookie who will struggle at some point because all rookies struggle at some point. I was reading some quotes from the Saints coaching staff after the game. They were asked if anything Griffin did surprised them. They said no. They had prepared for all of it. If true, it’s a pretty impressive compliment for Griffin. It means that the Saints had him planned for but he was too good to be stopped. It’s one thing if a play catches a team off guard. It’s another entirely if you know what’s coming but simply aren’t good enough to stop it.