My Life as a Mascot

There’s a person in there, asshole. 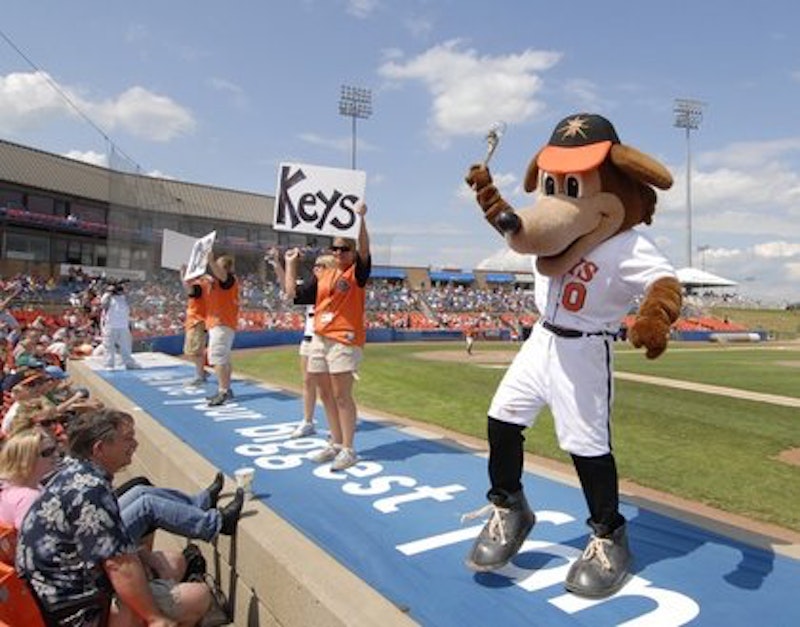 For some reason, perhaps an insane need for attention acquired during my dysfunctional childhood, I’ve been a sports team mascot on a number of occasions. It started in high school, when I filled in for my friend as the Upper Merion High School Viking in my hometown of King of Prussia, Pennsylvania.

It was an adrenaline rush. The crowd and fans, the energy of the cheerleaders, the proximity to the incredibly sexy padded football player asses.

Being a mascot is a great job for someone like me who has absolutely no athletic ability but loves to dance and attract embarrassing attention to herself. When you are a mascot, it is actually your job to draw attention to yourself, but in the right costume, no one knows who you are.

Back at Western Maryland College (the name of the school was changed to the name I shall not speak of), I was editor of the school newspaper and heard that the cheerleaders had ordered a new $1000 Green Terror mascot costume. However, it had arrived the week before football season started and they hadn’t had time to hold tryouts. I offered to fill in as the Green Terror (the costume is a bizarre green mix of Oscar the Grouch and the Tasmanian devil) until they could get a permanent mascot.

I had a blast. Given zero guidance (Cheerleaders: “I don’t know, so like just jump around or whatever.”), I positioned myself directly in front of the marching band, which at a small liberal arts college consists of about 12 people, not in uniform. They played random songs to which I randomly danced.

I mean, the Green Terror was a very masculine costume—the last thing they wanted him to look like was Tinkerbell with big teeth. I was already a bit small for the costume. My eyes could barely peer out the screen of the huge head’s bottom lip. No one knew it was me. I couldn’t wear the huge green monster feet because they made me trip, so I bought a pair of hi-top green converse. That’s school spirit.

I scared small children. At first, I felt awful about it and since the costume had no peripheral vision, I wouldn’t peer down at them if they looked scared. But then in a bizarrely monster-esque way, I kind of thought it was funny. I didn’t go chasing them or anything, but if they could have seen my face, they may have seen a sneer. Little wimps.

The cheerleaders never held try-outs, and I remained the Green Terror until two years later when the costume was stolen from the locker room. Who would steal a six-foot furry green monster costume? Drunk college students, probably. So I was the only one to wear that amazing costume.

My next mascot gig came a few years later while I lived in Frederick, Maryland. I worked at the Chamber of Commerce and had met the Baltimore Orioles Triple A division Frederick Keys guys. One had mentioned they were looking for a mascot for the Frederick Keyote (a cross between a coyote and Goofy or Pluto—I always get them mixed up) and boom, I was in. $25 a game. I’m a professional mascot now, bitches.

It was even more fun than college because of the fantastic stadium with its awesome announcers, huge crowds, and the obvious highlight: a t-shirt slingshot. What more could a mascot ask for?

But I did experience mascot abuse, which is actually a real thing. One night the stadium gave out small wooden bats (not the mascot’s choice for a giveaway!) and some high school guys beat me with them pretty bad until a team official could get to me to stop it. I was bruised for weeks; the body part of the costume doesn't have much padding- luckily the head part does.

I lost five pounds a game in that smelly costume, and I loved every inning of it. Dancing on the dugout to “Come On Ride the Train” and “Everybody Dance Now” was a blast, and I only got accused of “dancing too much like a girl” one time. One time when I was in the dugout, a player spit right next to my foot and I flipped him off; a gesture I discovered was looked down upon by management.

Honestly, being a mascot was fantastically fun, and if I ever had the opportunity again (hello, Orioles! Ravens! Who needs a sub mascot?) I’d take it in a second.