Despite losing Cruz, Markakis and Miller, the team will compete in 2015. 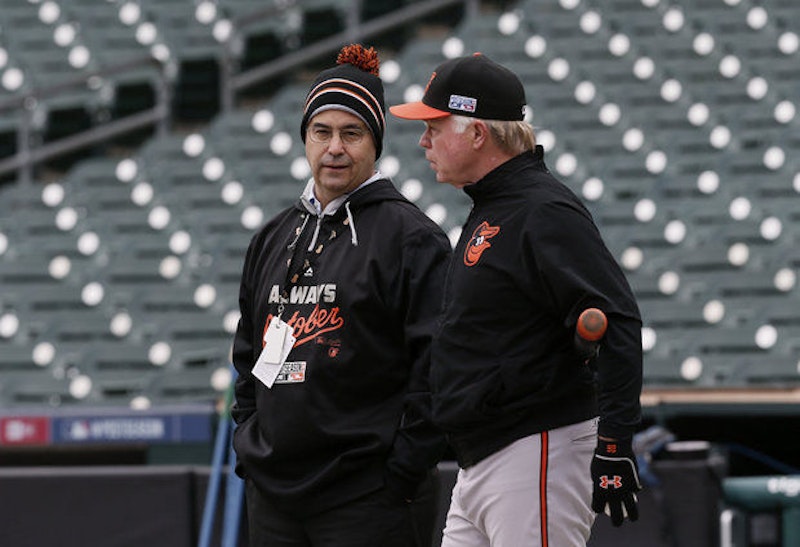 The Baltimore Orioles entered the offseason with two huge question marks: the pending free agency of right field fixture Nick Markakis and AL home run champ Nelson Cruz. In the span of three days this week those question marks turned into gaping voids, both in the lineup and the hearts and minds of O's fans.

The O’s 2014 season ended with a whimper as the Royals swept the ALCS, but the good feelings created by the team's second playoff appearance in three seasons generated orange pride among the long dormant fan base. The 2012 team looked like a happy accident. The 2014 team appeared solid, with the returns of Chris Davis, Matt Wieters, and Manny Machado giving hope for another strong season next year. The departures of Markakis and Cruz, despite having perfectly reasonable baseball and business rationale, have caused many fans to once again question the future of the team and the commitment of ownership.

Cruz's departure wasn’t particularly shocking. The offensively challenged Seattle Mariners signed Cruz to a four-year contract worth nearly $60 million. It's the kind of deal Cruz was hoping for last winter when he finally had to settle for a one-year $8 million pact with Baltimore. A decade ago, signing an aging, one-dimensional slugger like Cruz to a long-term deal may have made some sense, but baseball's new drug policy has substantially decreased the number of mid-30s players posting career years. The Orioles are banking that Cruz topped out in 2014. They'll collect the draft pick compensation, appreciate his role in bringing an AL East championship to Camden Yards, and gladly leave the Mariners on the hook for $57 million.

The Markakis situation is a bit more delicate. Like Brian Roberts before him, Markakis was a bright spot during Baltimore's 15-year swoon. He was the rare promising homegrown prospect who actually developed into a solid big leaguer. Now he's an Atlanta Brave and Orioles fans are confused, frustrated and worried. All of those are perfectly reasonable and legitimate reactions to the departure of a beloved player, but the Orioles know what they're doing.

At this time last December, I would have offered Markakis a piggyback ride to get him off the O's. He was coming off a dismal 2013 season and due to make more that $15 million for the 2014 season. I was pleasantly surprised, and willing to eat a plate of crow, when Markakis bounced back from a lingering wrist injury to post a solid season.

Despite winning his second Gold Glove last season, Markakis isn't favored by defensive metrics. He still has a strong and accurate arm but has clearly lost a step. Looking back at the ALCS may provide an indication of why Markakis is now an ex-Oriole. In Game One, Alex Gordon hit a broken bat blooper down the right field line with the bases loaded. Markakis took an eternity to field the ball as the bases cleared and Gordon ended up on third base.

The Orioles have some in-house options to fill the RF void with a Steve a Pearce/David Lough platoon looking like a possibility. Dariel Alvarez, a 26-year-old Cuban defector, had an impressive 2014 season split between Double-A and Triple-A. Alvarez is graded as a plus defender with a terrific arm. He could be a factor in the Orioles' outfield at some point next summer. Nori Aoki and Melky Cabrera loom as viable free agent options though Cabrera's reported interest in a five-year contract could scare off the O's. Baltimore could seek a short-term deal with free agent Alex Rios. As the Texas Rangers' right fielder last season Rios posted a sub-par offensive season, hitting just four home runs and posting a .311 OBP but he has a track record for being very streaky and may be best served by accepting a one-year deal in an attempt to re-establish his value.

At DH, the Orioles may have been reluctant to meet the asking price for Cruz due to the uncertainty surrounding Matt Wieters. The All Star catcher is rehabbing from Tommy John surgery and may be slotted often as DH in 2015 as he works his way back to full strength. The Orioles could opt to bring back catcher Nick Hundley to team with Wieters and Caleb Joseph. Wieters could DH a couple of times each week when he's not catching and the Orioles could acquire a right-handed platoon partner like free agents Delmon Young or Michael Morse.

The exodus of Cruz and Markakis, as well as Andrew Miller now with the Yankees, has caused distress in Birdland. The Orioles made a habit of disappointing fans for 15 years to the point that many still don't trust the club's motives. I'd say that three straight winning seasons and two playoff berths have given Dan Duquette and Buck Showalter the equity to act in the best interest of the franchise. While some will point to the Markakis departure as more proof of owner Peter Angelos being cheap, I see it as a sign that Duquette is fully in charge of baseball decisions.