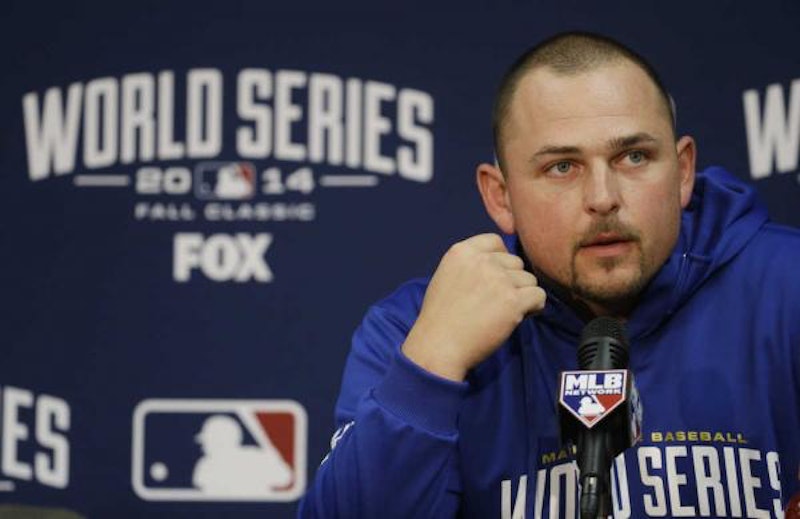 The last time America set eyes on the Oakland Athletics, they were playing comic foil to the Kansas City Royals’ unlikely run through the MLB playoffs. After leading 7-2 in the bottom of the eighth inning the A’s used a combination of inept catching and stubborn managing to feed a furious Kansas City rally. The Royals went an incredible seven–for-seven in stolen base attempts against noodle-armed Oakland catcher Derek Norris, who entered the game as a replacement for the injured Geovany Soto. Now, less than three months since the A’s 2014 season ended, the team is a shell of the one that took the field that night in Kansas City.

Oakland was one of baseball’s best teams through July. GM Billy Beane added ace lefty Jon Lester and Jeff Samardzija for the playoff push only to see his team nosedive in August and September. Norris, and to a lesser extent manager Bob Melvin, took the heat for Oakland’s loss in the American League Wild Card game. The truth is that the decline started weeks in advance. The swap of Yoenis Cespedes for Lester took one of the A’s best bats out of the middle of the batting order. Beane’s recent trades have fully gutted what was left of Melvin’s offense. All Star third baseman Josh Donaldson is in Toronto, first baseman Brandon Moss is in Cleveland, and shortstop Jed Lowrie departed as a free agent for Houston. Beane also dealt Samardzija to the White Sox, for an uninspiring return. As if the late season collapse and Wild Card debacle weren’t painful enough the A’s are now in full rebuild mode.

Things haven’t gone much better the past few months for the Royals. Kansas City lost a wildly entertaining World Series to Madison Bumgarner and a few guys calling themselves the San Francisco Giants. Shortly after the Series ended, long-time Kansas City DH Billy Butler bolted for a three-year deal with the schizophrenic A’s. Beane wasn’t willing to pay All Stars like Donaldson and Samardzija but he invested $30 million in a declining one-dimensional player like Butler. Kansas City replaced Butler with Kendrys Morales, one of the few players who’s declined more sharply than Butler over the past two seasons. With Nori Aoki set to depart as a free agent the Royals inked Alex Rios to a one-year $11 million deal. Rios seems grossly overpaid after posting a .311 on base percentage and just four home runs for the Rangers last season. The good news is that Rios is only signed for one year and will be motivated to produce.

While the KC replacements may be lackluster, at least they’re replacements. The Baltimore Orioles, the other team felled by the Royals October barrage of seeing-eye singles and broken bat bloopers, have no answer for the losses of Nelson Cruz and Nick Markakis. In the ultimate game of musical outfielders the Orioles could end up with Aoki and former Giants’ left fielder Michael Morse on short-term deals to fill the lineup voids.