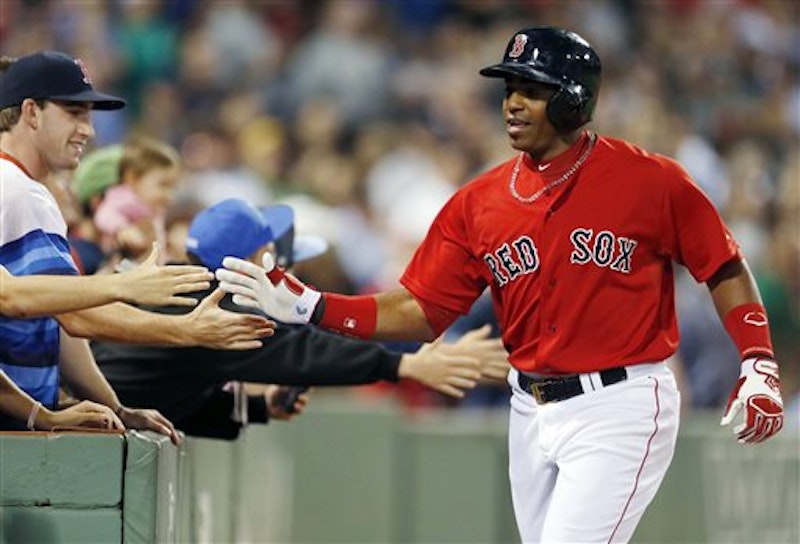 Booker Smith: “What is going on? I’m so confused…”

Sensibility doesn’t exist anymore. Money will guide us to victory. A team’s quality is determined by its number of outfielders. The anarchist in me is intrigued.

What exactly does Cherington hope to accomplish by adding even more expensive, aging hitters to a lineup that already features Mike Napoli, David Ortiz, Dustin Pedroia, Shane Victorino, and Allen Craig? Forget the fact that they’re aging and expensive: The Red Sox need pitching, not hitting. These signings force Cherington to deal from his depth areas. They devalue his trade chips. Here’s what’s going to happen:

Yoenis Cespedes, incentivized by his pending free agency: Traded to the Reds. The Mets will probably inquire, but they’re so stingy. I hate Sandy Alderson.

Allen Craig, who’s normally a great hitter (it’s really the only thing he does well): Traded to the Marlins, along with his team-friendly contract. The Mike Lowell acquisition in reverse.

The Sandoval signing is at least understandable. Cherington didn’t want to play Mookie Betts at third base (for a number of stupid reasons, I’m sure), so he put on a Steinbrenner Halloween mask and bought the best third baseman available. But how is Ramirez, without even taking contracts into consideration, an improvement over Cespedes? They’re both powerful, injury prone, impatient right-handed hitters. The former walks a bit more, but the latter has more power. The former is more consistent, but the latter has more upside. The former is secure financially; the latter is hungry for a huge contract.

So why sign Ramirez? No clue. But then again, I can’t explain half the moves Boston’s front office has been made of late. Presumably they’ve been thinking about this signing for a while. They’ve done their research, scouted his recent games and talked with his coaches. Let’s assume this deal was six months in the making (That’s a conservative guess considering the fact that Theo Epstein stalked Carl Crawford for 16 years before signing him). So why trade John Lackey, a dependable, veteran pitcher, for Allen Craig and Joe Kelly? Why sign Rusney Castillo to a seven-year/$72.5 million contract? Why trade Jon Lester, the most sought after trade chip last July, for Cespedes, another outfielder? Ben, I don’t care what kind of defensive shifts you’re imagining; there are only three outfield positions.

But you know what? Forget it. Sensibility doesn’t exist anymore. I’ll stop trying to rationalize this. I’m not a fan this offseason. I’m not a backseat GM or an amateur sports writer. I’m an anarchist. Weird things are happening in Boston, and it suits me fine.