No Quick Fix For The Cubs 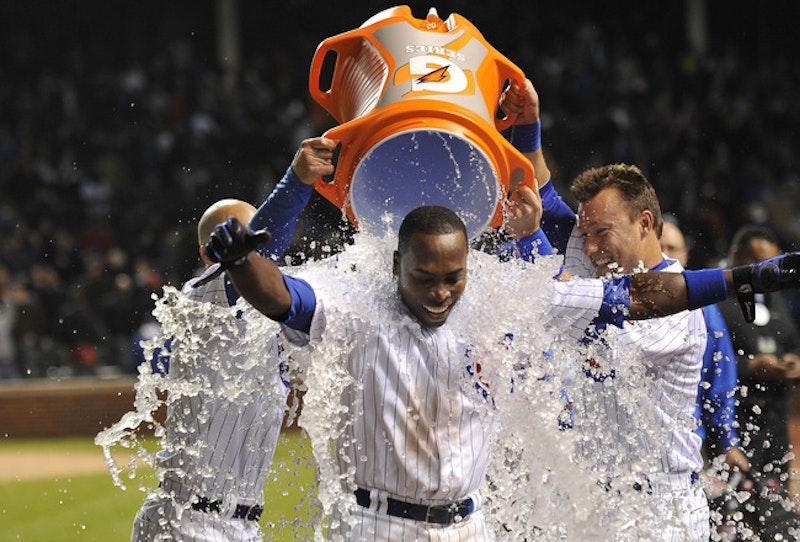 The Chicago Cubs lost to the Phillies on Monday night, falling to 8-15 for the season. The hype surrounding Theo Epstein’s arrival in Chicago has been quickly replaced by the stark realization that the Cubs stink. The worst part is they’re probably going to stink for a while. Epstein has embarked on a full-scaled rebuilding project that could take years to bear fruit.

The 2012 Cubs are short on bright spots. Starlin Castro and Matt Garza have performed predictably as the team’s best hitter and pitcher respectively. Castro is once again among the National League’s leading hitters but he has already committed seven errors at shortstop. Garza has been outstanding with a 0.89 WHIP and 2.67 ERA in five starts. He’s also been the subject of trade rumors for months. First baseman Bryan LaHair, who’s getting his first shot at regular playing time at 29, has been a revelation. LaHair slugged his fifth homer of the year to draw Monday’s game even at four runs apiece in the eighth inning. The Cubs have just nine home runs as a team with no player other than LaHair hitting more than one.

The Cubs lack dependable options at third base, catcher, left field, and center field. Alfonso Soriano is the de facto left fielder. The onetime slugger is a shell of his former self with just two extra base hits in 76 at bats. Oh yeah, Soriano is still owed over $50 million through the 2014 season. Rookie manager Dale Sveum has little choice but to continue running Soriano out there in left field until he’s given a better option or Chicago’s front office takes the unlikely step of releasing the outfielder.

The Cubs swapped stalled prospect Tyler Colvin to Colorado over the winter for fellow failed prospect Ian Stewart. Colvin has responded to post a solid .821 OPS in limited duty for the Rockies. Stewart has bombed in Chicago. Tasked with filling the large shoes of Aramis Ramirez, Stewart has struggled mightily posting a measly .507 OPS with just four extra base hits and 18 strikeouts. Though he’s still just 27, Stewart doesn’t look like the answer at the hot corner.

Opening Day starter Ryan Dempster is currently sidelined with an injury, leaving Garza as the lone wolf in the Cubs’ rotation. Former Pirate Paul Maholm has been hammered in four starts. Chris Volstad, swapped for Carlos Zambrano in the offseason, has been brutal through five starts. Randy Wells, Dempster’s fill-in, has been predictably hammered. The Cubs lack impact arms at the upper levels of the minor leagues, which has fueled the Garza trade speculation. Other than lefthanders Travis Wood and Trey McNutt there isn’t much help on the way for the beleaguered rotation.

The Cubs do have two highly regarded hitting prospects currently playing for Triple-A Iowa. Center fielder Brett Jackson figures to be manning the outfield in Wrigley Field at some point this summer. He’s generally regarded as the Cubs’ top prospect plus Chicago recently dealt starting center fielder Marlon Byrd to Boston. Jackson is just 23 and has yet to play a full season at Triple-A. The Cubs will likely leave him at Iowa to gain additional seasoning, and another year of arbitration eligibility, until late June or early July.

Anthony Rizzo, a first baseman acquired during the winter from San Diego, is the other Cubs youngster set to make a major impact. Rizzo played 49 games for the Padres in 2011. It was an experience he no doubt would like to forget: in 128 at bats Rizzo struck out 46 times and hit just .141. Chicago dealt fireball reliever Andrew Cashner for Rizzo and so far he’s paid dividends. Rizzo has been mashing the ball for the Iowa Cubs. In his first 21 games Rizzo hit seven home runs, drove in 21, and posted an impressive 1.098 OPS. Like Jackson, Rizzo probably won’t hit Chicago until later in the season. The fact that Rizzo and LaHair are both first baseman poses an interesting dilemma for the Cubs. LaHair has played some outfield in the minors and could be asked to make the move to right field to open a spot for Rizzo. Such a move would likely result in current right fielder David DeJesus splitting time in left with the scuffling Soriano. The more likely scenario may be that the Cubs deal LaHair before the July trade deadline to fill another hole and give the first base job to Rizzo.

The Cubs have too many problems and too few answers. The feel good story of LaHair loses some luster because he’s blocking Rizzo. Brett Jackson is considered a five-tool player but it could be another two months before he makes his debut. Garza has been outstanding, perhaps too good to be toiling for a last place club. He’ll be a free agent following the 2013 season, meaning any decision on his future needs to be made in the next few months. The Cubs and Garza have reportedly discussed a long-term contract extension but, given the paucity of minor league talent and gaping holes on the big league roster, the best bet for rebuilding may be dealing the right-hander. Theo Epstein and crew could then turn their focus towards building around the core of Castro, Rizzo and Jackson along with the players acquired a Garza trade.

On the bright side, the Cubs have trimmed about $40 million off of last year’s payroll. That doesn’t do the fans any good, but it does set the team up nicely to make a run at free agents in upcoming off seasons. Former general manager Jim Hendry focused on free agents to the detriment of the farm system but Cubs fans shouldn’t expect Epstein to make the same mistake. Regardless of what happens with Garza and LaHair, free agent pursuits, or when Jackson and Rizzo arrive to stay, it figures to be a long few seasons for the Wrigley faithful. No worries, they’ve been practicing patience for over 100 years.