Why would the Redskins burn a fourth round pick on Kirk Cousins? 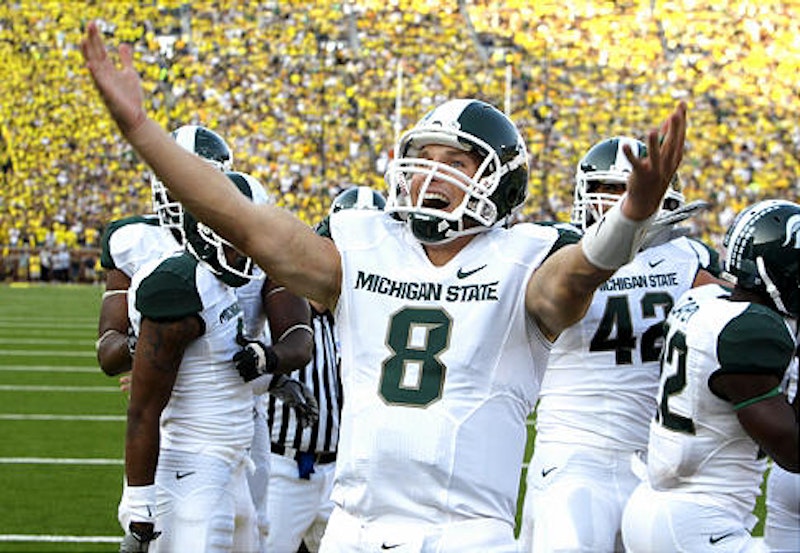 What’s the value of a fourth round pick? Fourth rounders sometimes are traded for decent starters, or they’re packaged to help a team move up a few rounds in the draft to get someone else. Sometimes fourth rounders become good NFL starters, but mostly they’re role players, special teamers, or don’t make the team.

However, in this case, a fourth round pick has told us more than we wanted to know about the Washington Redskins. As you may know, the Redskins just drafted quarterback Robert Griffin, III with the second overall draft pick. They had the sixth overall pick based on their lousy record last season, but traded it, two other first round picks, and a second round pick to move up four slots in the draft in order to be in position to draft either Griffin or Andrew Luck, the two premium quarterback prospects available this year.

Since winning their last Super Bowl in the 1991 season, the Redskins have made the playoffs four times: 1992, 1999, 2005, and 2007. During those years only, the team averaged 9.5 wins. That sucks. Good quarterback play would have helped immensely.

The team’s needed a franchise quarterback for a long time and now, with Robert Griffin, III, they hope they have one. The cost was extreme. Three first round picks and a second round pick all for one unproven quarterback prospect? That’s massive. That’s putting all of your eggs in one basket.

Or so I thought.

Having spent their first and second round picks this year to move up four spots to get Griffin, the Redskins had a third, two fourth, a fifth, a sixth, and two seventh round picks left. With a roster that still had significant holes to fill even if Griffin proves to be the Pro Bowl caliber player Washington hopes he is, it was imperative that the Redskins spend the rest of their picks on guys who could fill in those holes.

With their third rounder they took an offensive guard. He wasn’t rated as highly as some other offensive linemen still available but the Redskins undoubtedly have their own internal rankings that they likely went with. That’s fine. Then, with their first fourth round pick, the team’s third pick in the draft, they selected… another quarterback.

The Redskins spent a lot for a pedigreed quarterback of the future, and then with one of their precious remaining picks, they got another one. The Washington Post quoted Redskins head coach Mike Shanahan telling that second quarterback, Kirk Cousins, “I couldn’t pass you up.” I don’t see why not.

It’s nice to have a good young quarterback on the bench and Cousins could, according to scouting reports, end up having a fine career. Of course, so could thousands of other quarterbacks drafted in the fourth round, but that’s neither here nor there. The team badly needed offensive linemen and defensive backfield help. Both were available in the draft at that point and yet the team opted to pick someone who, if their scouting is correct, will never ever see a snap.

Back-up quarterbacks can be had for nothing. They are entirely replaceable. That isn’t to say they are worthless, because they aren’t, but if Griffin III gets hurt, the team would have been just fine (read: just as lousy as this year) with former starter Rex Grossman coming in off the bench. In fact, that is probably what will happen anyway should Griffin III go down. At least next year, Cousins won’t even dress on game days.

Had the team picked an offensive lineman or a safety, or even a wide receiver (another of which they don’t need), you could defend the selection. Even picking a kicker might be arguable. But there is one position that the team spent more on than any other team has ever spent in the history of the NFL. The team is as set there as they’ll ever be. Whether he is immediately great or plays like a man who has never held a football in his hand, Griffin is going to start every game next year. If Griffin gets hurt, the Redskins won’t be competitive anyway and either Kirk Cousins or Rex Grossman won’t save them.