From Prospects To Suspects 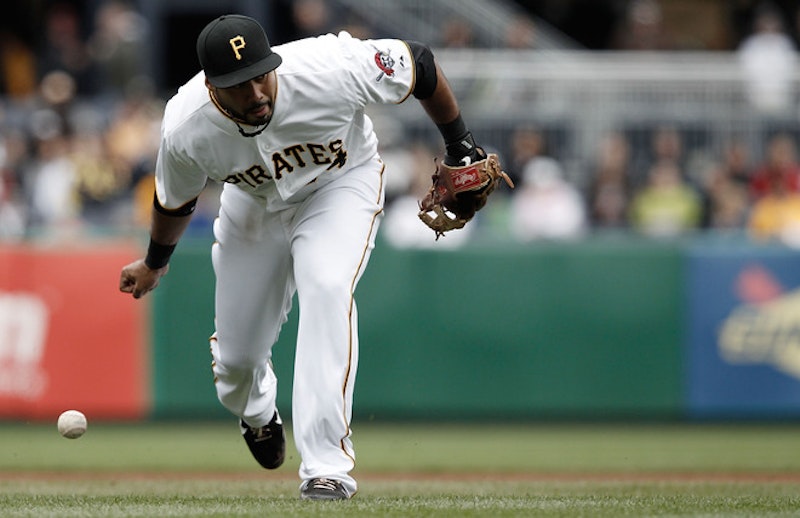 The Pittsburgh Pirates are not a good baseball team, and haven’t been for nearly 20 years. The Pirates gave their fans some short-lived hope last summer as they hovered around the top of the National League Central division until late July. In the end Pittsburgh finished 72-90, a full 24 games back of the World Champion Cardinals. One of the biggest disappointments for the 2011 Pirates was third baseman Pedro Alvarez.

Alvarez was the second overall pick in the June 2008 amateur draft. He was a standout at Vanderbilt University and expected to quickly develop into a big league slugger. Alvarez punished Double-A pitching in 2009, and started the 2010 season with Triple-A Indianapolis where he pounded 13 home runs and posted a .896 OPS in 66 games. Alvarez was headed for the Majors.

Alvarez arrived in Pittsburgh with much fanfare. He was viewed as the Pirates’ solution at third base, a position that plagued the franchise since Aramis Ramirez was essentially given to the Chicago Cubs. Alvarez didn’t disappoint. He finished the 2010 season by hitting another 16 home runs in 95 games for the Pirates. At just 23, Alvarez posted an OPS of .788; he struggled on defense but his bat had the look of an All-Star in the making.

Now, less than two full years later, Alvarez is being discussed as one of the biggest draft busts in baseball history. He struggled badly in 2011. In fact, Alvarez was so bad that he spent much of the season back in Indianapolis. In 74 games for the 2011 Pirates Alvarez hit just .191 and struck out 80 times in 235 at-bats. His defensive struggles continued as well as he committed 14 errors at the hot corner.

If Pirates fans were hoping for a resurgent Pedro Alvarez in 2012 they may need to head back to the wishing well. Pittsburgh has played just 15 games but Alvarez has been dismal. The one time top prospect and future slugger is hitting just .108 for the season. Alvarez has four hits in 37 at bats. Even more disconcerting are his 16 strikeouts compared to one walk for the season.

Alvarez is hardly alone. The Pirates have scored just 30 runs this season. Neil Walker, Clint Barmes, and Jose Tabata are all struggling. There’s still time for Alvarez, but at 25 and in his third Major League season, it’s time to give the Pirates some return on their investment. Of course, this time last season some knuckleheads were calling the Orioles’ Matt Wieters one of the biggest busts in draft history.

Brandon Belt, another one time top prospect, is going through similar struggles in San Francisco. Belt doesn’t have the pedigree of Alvarez. He was drafted in the fifth round of the 2009 draft by the Giants and had a meteoric rise through the minors in 2010. In just his first full season of professional baseball Belt combined to hit .352 with 23 home runs and 112 RBI in three levels of the Giants’ minor league system. His hot hitting carried over to the spring of 2011 when he earned a spot on San Francisco’s opening day roster.

Since then Belt has bounced between the Giants’ bench and Triple-A Fresno. The real problem for Belt, and the Giants, has been the presence of veteran Aubrey Huff. San Francisco signed Huff to a two-year $22 million extension following their World Series victory in 2010. San Francisco holds a $10 million option on Huff for the 2013, which they are almost certain to buy out for $2 million. Huff followed up his 26 home runs, 86 RBI performance in 2010 with 12 dingers and a .676 OPS in 2011, and is off to a slow start in 2012 as well, but that $10 million salary has earned him a place in the Giants’ lineup.

Belt struggled as a rookie in 2011 but did manage to hit nine home runs in 63 games for the Giants. When he wasn’t riding the bench in San Francisco Belt pounded Triple-A pitching to the tune of a .975 OPS in 49 games for Fresno.  He made San Francisco’s opening day roster again this season but has started just five of the Giants’ first 14 games. Given Huff’s presence, and price tag, it is likely that Belt will find his way back to Fresno again this summer. The strange thing is that the Giants, who struggled to score runs last season and did little to add offense in the offseason, could really use a player like Brandon Belt.