The ballad of a little-league soccer assistant coach. 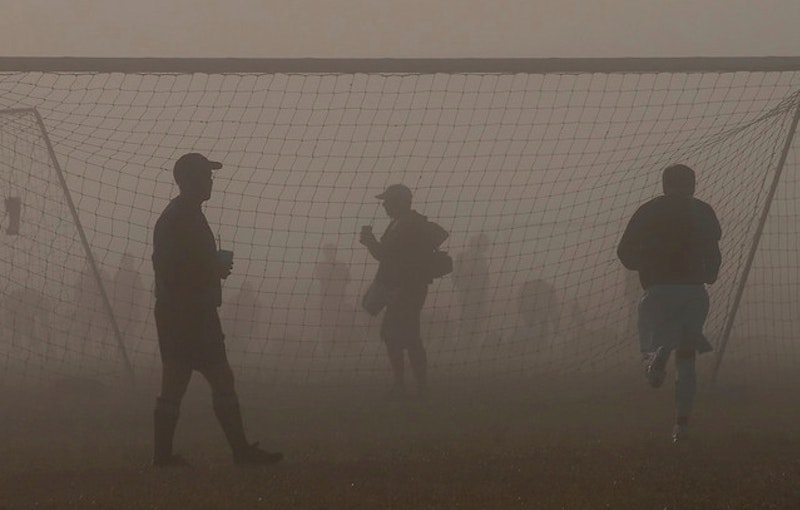 Being a little-league soccer assistant coach is a lot like being a hype man. You don’t get much credit or call many shots; you’re mostly there to cheer, encourage, re-tie shoelaces or help run drills and reiterate or illustrate the coach’s core talking points. You illustrate the finer points of dribbling the ball up and down the field; you pose as a defender for an opposing team, a hypothetically over-grown yet bumble-footed goal guardian.

You high-five. You curtail distractions and impromptu games of tag. You dispense rapid-fire superlatives—“What a kick!” “GOAL!” “Awesome!” “What a bunch of professionals you all are!”—until you run dry and all that seems to come out is “Great job” or “Good try!” You stalk the sidelines during games—the way a hype man stalks a stage, maybe—applauding thwarted brilliance, barking instructions, big-upping evasive actions, and showering the entire team with praise whenever we happen to score.

You do this because you’re an assistant coach, and you do it because soccer parents don’t freak out on the sidelines anymore; they’re aloof and remote, perpetually-hydrating shadows enveloped in canopy seats. You fumble the cruelly similar names of the two blonde, lanky moppet girls; you gawp at the effortless natural grace of the pony-tailed Salvadoran wunderkind and the chutzpah of the coach’s daughter’s intense-if-scattershot style of play.

(Your son, in the team context, is not your son in the familial sense; there’s a distance, to foster some degree of independence in him, to deepen his resolve. During those grueling, hour-long practices and 20-30 minute games bisected by copious water breaks, you are not a father; you are an assistant coach.)

Sure, you fret on game days when the opposing team has four or five substitutes while your side has none to spare, because the depths of the ice chests may be limitless, but the temperatures are triple-digit and your budding Mia Hamms and Peles are four and five years old. And they are everywhere, because little-league soccer does not prescribe positions. Full backs, goalies, wings? No, just a bunch of kids chasing a ball, sometimes getting into one another’s way, sometimes moving the ball in the wrong direction and scoring for the other team; and accidental advantages vanishing in a blink, so often a ball scooting out of bounds, the shrill, shrike-like tweet of a referee’s whistle, then slapping opponents’ outstretched palms in the timeless post-game gauntlet of good sportsmanship.

Everyone leans in—we’re a team, we’re the Jets—hands in a pile: have fun, play our best, work together, and you are smiling and dispensing kernels of wisdom and confiding that you’re proud, so proud of them. Proud of Kyra’s fierce drive, Cherry’s easy footwork, Isabelle’s defensive spirit, Nodin’s unwillingness to give up—proud of everyone for persisting, for working so amazingly hard this season. Then we all drain our thermoses and water bottles and pile into our vehicles and drift back into the almost picayune rhythms of our regular lives.