Adrian Gonzalez Is Having a Pretty Weird Year

The slugger's true potential is revealed. 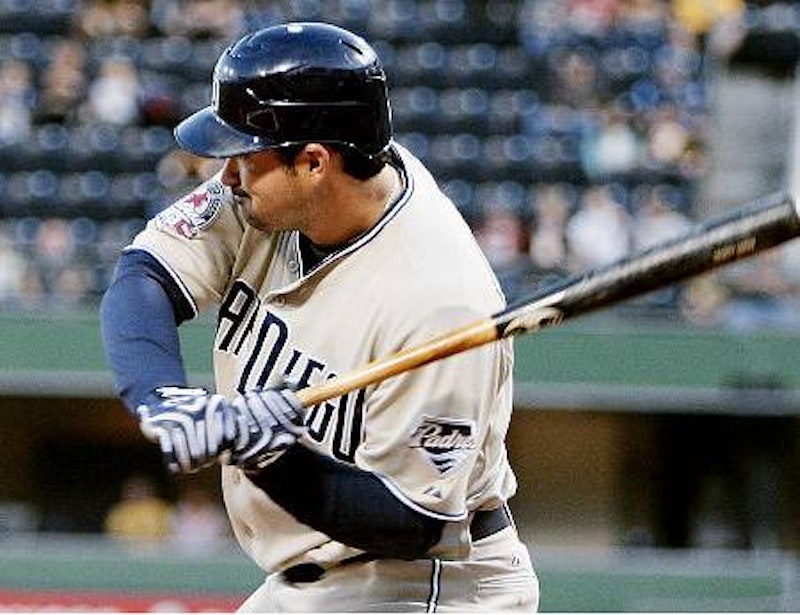 As a member of the San Diego Padres, Adrian Gonzalez was a part-time basher because his home park obscured his true potential. His trade to the Red Sox has confirmed that he’s a bona fide slugger, but a closer look at his first season in Boston reveals he’s done it in an odd way.

Not long ago, I Tweeted that Gonzalez has spent his first season in Boston bouncing between Babe Ruth and Tony Gwynn. I’ll assume all are familiar with Ruth, but just in case, Gwynn was a singles hitter with mediocre power. He never hit more than 17 homers in his 20 seasons in the majors, and averaged nine per season even though the bulk of his career was at the beginning or the shank of the steroid era. As good as Gwynn was he wasn’t the power hitting first baseman Gonzalez is supposed to be.

As you will recall, last off-season the Red Sox traded three of their top minor league prospects to the Padres for first baseman Gonzalez. Gonzalez had hit 30 or more homers in each of the last four seasons before coming to Boston, but what made the feat more impressive is where it was accomplished. He did it with the hitter’s cemetery that is San Diego’s Petco Park. Most hitters hit slightly better at home than on the road, but not Gonzalez. He hit a pedestrian .267/.367/.442 at Petco, decent numbers but nothing close to All-Star worthy. But once he left San Diego he became a serious slugger, hitting .308/.379/.571. His .950 OPS on the road during his time in San Diego would, if accomplished this season, place him 11th in all of baseball. So there was reason to believe that once Gonzalez got out of San Diego he’d show himself to be the monster basher hidden behind Petco Park’s cavernous dimensions.

And that’s exactly what has happened. This season Gonzalez has an OPS of .965, good for eighth overall in all of baseball. Yet that number papers over the strangeness of how it was achieved. Gonzalez’s monthly splits show some ups and downs as you would expect from any player, but if you move the endpoints around a bit you get something much different.

Gonzalez started out the year with 26 games of Tony Gwynn. Then he turned into Babe Ruth for the next 50 games before switching back into Gwynn for then next 49. The five homers in the last six games point to another Ruth run, this one particularly well-timed if you’re a Red Sox fan.

The upshot is Gonzalez has hit 20 homers in two short stretches totaling 56 games. Over the other 75 games he’s hit three homers. Of course, even when Gonzalez hasn’t hit for power, he’s got on base by hitting tons of singles. Despite his decreased power numbers, Gonzalez has topped his previous career high in hits already with another month of the season to go.

Gonzalez has had, as anyone can see, a streaky first season in Boston, going from singles hitter to feared slugger and back again. He’s hit for more average and less power, but despite this Ruth and Gwynn act, he’s been productive. The end result is Gonzalez has posted the numbers that most analysts thought he could in his first season in Boston. Maybe just not in quite the way we might have thought.