If they can add a slugger, and keep their recent lineup in order. 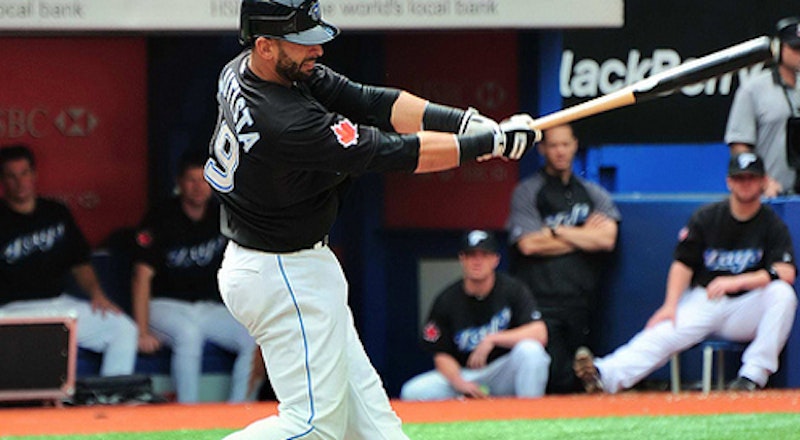 Earlier in the year, before the season started, I predicted the Toronto Blue Jays would become a contender in the AL East by 2012. As strange as it may sound, I stand by those words. Toronto is currently one game below .500 and 13.5 wins back in the division, but the current performance of the team will have no effect on the future club, mainly because the 2011 Blue Jays are a work in progress.

General manager Alex Anthopoulos has managed to cut out the rot that former GM J.P. Ricciardi left him while still remaining static competitively. The Jays have remained at, or near, .500, since Double A has taken over, while improving for the long-term. Rebuilding a baseball club can be an arduous task, evidenced by perennial losers like the Orioles, Royals, and formerly the Pirates. If done correctly, the rebuilding process can take up to five years; allowing time for prospects to develop properly through the system. Recently, Jon Daniels took the Texas Rangers from a last place laughing stock to World Series contender in a very short amount of time. Strong drafting and well timed, well-executed trades were the ticket, and many other clubs have examined his process and tried to copy it. Sadly for Daniels, Texas’ strategy won’t be the gold standard for long, because Anthopoulos is almost finished in turning Canada’s prospect-less, contract albatross ridden joke of a team into the club to root for in 2012 and onward.

This is a bold prediction. Toronto’s competition isn’t going to be any weaker; in fact, it’ll probably be stronger. The Red Sox and Yankees both plan to add starting pitching this winter, and Tampa Bay will bulk up with the usual low cost/high reward guys that they always seem to find. The Rays also have quite a few prospects of their own, and if James Shields does in fact get traded this offseason, they’ll far and away have the best farm system in baseball. The Jays have weaknesses, too, and some of them are glaring. Aside from superstar Jose Bautista, Canada doesn’t have one player with a BB% at or above 10.0. Without people on base, all their home run potential is going to waste.

The simple solution is to acquire an on-base machine, someone to balance out the rest of the impatient hitters. Prince Fielder, a free agent at the end of the season, is the perfect fit. Adam Lind and Edwin Encarnacion have been sharing first base duties, but both have the ability to play other positions, so the Jays do have room for the rotund vegetarian. Fielder’s superstar status is earned, as he generally posts monstrous power numbers and an OBP well over the benchmark .400. He will command an otherworldly paycheck, however, especially since infamous sports agent Scott Boras represents the slugger. Anthopoulos has stated that the Blue Jays are in a position to add payroll substantially, and are just waiting for the right moment. Fielder may present some health risks, with his weight being an issue, but those concerns have been far overblown, evidenced by the fact that he’s never been on the DL in his Major or Minor League career.

Anthopoulos has also brought new ideas to the drafting board, going after mainly high-risk/high-reward players. Although the concept is sound, the Blue Jays’ scouting department hasn’t executed it perfectly. Recent draftees Deck McGuire, Asher Wojciechowski, and Aaron Sanchez have all struggled in their respective classes. Tyler Beede, the 21st overall selection in the 2011 MLB Amateur Player Draft, didn’t even sign with the club. Otherwise, though, Toronto’s farm system is flourishing. Anthony Gose, who was acquired from the Astros for first baseman Brett Wallace, has put together a weird season in Double-A. His .254 average is a huge area of concern, especially when a .331 BABiP is taken into account. The inability to hit for contact, combined with an only slightly above average walk rate, doesn’t bode well for a potential major leaguer. The youngster, who just turned 21, does have 15 home runs, and even more amazingly, 65 stolen bases. Swiping that many bags with only a .350 OBP is more than impressive, and if Gose can get his contact rate up, then he’ll be a superstar.

A middle of the order bat like Prince Fielder, or even Albert Pujols, would be more than welcome in Canada. With the addition of one of those two sluggers, the Jays’ 1-5 could rival any team in baseball. As long as the younger players (Brett Lawrie, Colby Rasmus, J.P. Arencibia, and maybe Travis Snider) continue to develop, Toronto could possibly have the strongest offense in baseball. Turning Canada into a contender rests with the pitching staff, which has enough upside to get the job done. With a little luck, and a few more brilliant moves from Anthopoulos, the Blue Jays could be playoff-bound next year.